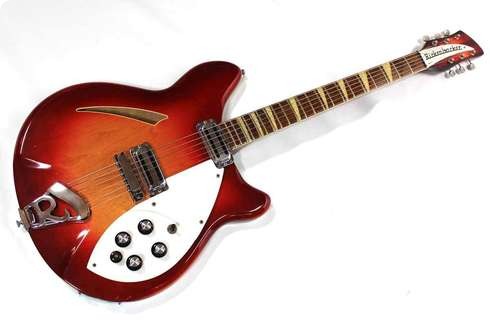 Rickenbacker guitars and basses have an iconic style that is straight out of the 1950’s.  Since their creation these guitars have been played by some of the biggest artists such as The Beatles, The Who, The Eagles, Rush, Yes, and many more.  In addition to the identifiable visual aesthetic, Rickenbacker guitars have a very distinct sound which is often sought by guitarists.

For the visual component of Rickenbacker’s aesthetic we begin at the top with the headstock.  The Rickenbacker headstock consists of very smooth curves contains a curved pennant with the underlined Rickenbacker logo.  Rickenbacker was one of the first guitar companies to produce electric 12-string guitars for which they designed a new tuner system with extra tuners at the back of the headstock to accommodate the six extra strings.

Moving down the neck we encounter the triangular fret marker inlays on what is almost always a rosewood fretboard.  Another feature of Rickenbacker guitars is their through-neck construction.  This means that the neck of the guitar is a single piece of wood from the headstock to the bottom of the body.

The body of the guitar holds a distinctive white two level pickguard with the bottom level housing the electronics and the raised level intended as a hand rest while playing.

At the base of many models we see the iconic chrome “R” tailpiece which holds the strings and looks awesome.  Finally one of the most distinguishable parts of Rickenbackers are their limited color palate.  Rickenbacker guitars traditionally come in three color options: Fireglo (red), Jetglo (black), and Mapleglo (natural Maple).  John Lennon of the Beatles made the Jetglo guitar an icon while Paul Mccartney played on both Fireglo and Mapleglo basses.

The sound of a Rickenbacker is equally as distinctive as the visual aesthetic if you know what to listen for.  These guitars and basses are very bright and twangy.  They tend to be heavy on the treble side of the sound spectrum while sometimes lacking in the low end.  Due to the type of sound produced, Rickenbacker bass players are able to play more active bass lines that can cut through the rest of the band’s sound effectively.  This can be heard in nearly any song by Rush.

One place that everyone is likely to have heard a Rickenbacker guitar is in the opening chord to ‘A Hard Day’s Night’ by the Beatles.  This particular chord was produced by George Harrison on a 12-string model Rickenbacker which produces a full but notably twangy sound.

Rickenbacker guitars are icons of the British invasion rock movement but have continued to be popular to this day due to their distinctive sound and retro 50’s solid color and chrome look.  I look forward to many more years of Rickenbacker created music and hopefully someday, my own Rickenbacker guitar.