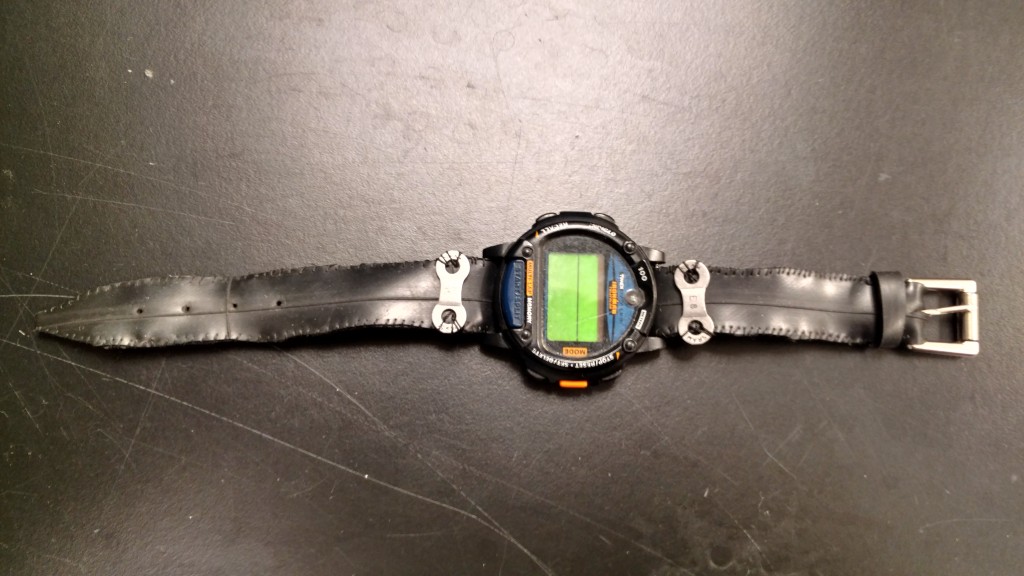 After a satisfying design process and two days of building it, I have finished my inner tube watchband. So far, it’s turned out a lot better than I thought it would. It’s waterproof, comfortable, looks hip, and upholds the bike aesthetic that I love since I am a cyclist myself. I will detail in this blog how it all came to be.

The ideal design process we discussed in class varies from person to person, but it always goes something like this: Problem, brainstorm, test, revise, finalize. The design process I used utilized each of these steps, but in a different order. It also was mostly carried out in concept only due to a dearth of time and resources. I started out by actually brainstorming. As I said above, my house has many bicycle tire inner tubes, so I got the idea to use those because of their versatility. Then I went out and looked for a problem that those inner tubes could solve, and I thought up the watch wristband idea since I had an extra watch lying around without a band. Now that my project was set, I set a list of conditions that it needed to meet, which will be described later.

Afterwards, it was time to start actually building my project. Testing consisted of finding the best way to make the band. I toyed with the idea of making a Velcro strap and loop type band, but decided against it for waterproof reasons. Wanting the band to be made of 2 layers of rubber for durability, I tried stitching or gluing the layers together. After making prototypes of each from the extra inner tube material I had, I decided on stitching for aesthetic reasons. Finally, there wasn’t much of a debate about the rest of the design. Stitching the rubber around the watch buckle and retaining loop is the sensible choice, as was creating the holes in the band from a punch. And since there aren’t a lot of bike parts small enough to fit on a watchband, using a couple of chain links sewn on for embellishment was an easy decision as well. After everything was decided, I constructed the final product.

The process of creating the band is too long to put in this post, but if you’re interested here’s the link to another blog post I did detailing it: http://www.aesdes.org/2016/01/31/bicycle-inner-tube-watch-band-finished-project/

In the true spirit of design, the actual process totally didn’t match the ideal process. Each design is very different and there are a million factors that can cause you to need to do one step before the other. In this case, it was trying to balance my expectations of the project (the criteria I listed above) with what I had to work with and was willing to do (time, materials I had to work with, etc.) and the way my mind thinks. What I learned is that if I were to create my own diagram for the design process, it wouldn’t be linear or looped. I would just list every step (maybe in a scattered placement to drive the point across) and just leave it. You connect them in whatever way you want, tailor it to the project at hand.

I initially chose to create this inner tube watchband because I am a bike racer who has lots of bike parts lying around and I wanted to use them. There are companies who create bags and wallets using inner tubes like Green Guru and Alchemy Goods, and it’s easy to see why. They are perhaps the most versatile of all bike parts, as their rubber construction makes them well suited to a variety of waterproof or elastic applications. Drawing inspiration from this (and because I have too many worn out tubes), I decided to use them.

My vision for the project was to create a band that not only recycled inner tubes, but would be functional and good looking enough to want me to wear it every day. Being made primarily out of bike parts, I wanted to go with an outdoorsy and bike based aesthetic. Looks wise this meant that I was aiming for a look that was form over function, less posh and luxurious, while still being hip. Functionally, it needed to rise above the usability of a normal wristband, something that would work just as well on top of Mount Everest or in the Amazon rainforest as it did on the town. And finally, it needed to use bike parts to drive home the point, since cycling is an outdoorsy sport. Using these guidelines, I created a set of criteria for my wristband: it needed to be waterproof and comfortable, attach to the watch using the normal pin mechanism, be embellished with something extra to complete the bike aesthetic, and needed to not look like a shoddy 15 minute project.

Functionally, the wristband was a success. Because it’s basically made of butyl rubber, it is completely waterproof. As a bonus, its level of waterproofing will not degrade over time due to the nature of the material. The rubber is also elastic, which helps to make for a more comfortable fit compared to a leather or metal wristband. For breatheability perforations were considered, but this particular band is thin enough to not need it. Perforations would also compromise the structural integrity of the rubber at such a width. Speaking of structural integrity, this band is very strong due to its dual layer construction and hand stitching. Two layers makes the band feel more solid as well as reducing the probability of a tear, and the stitching won’t degrade as much as an adhesive like rubber cement would over time. In all, the band feels like it won’t let you down or get in the way even in the wilderness.

Artistically, this was a success as well. The rubber contributes to the rugged and outdoorsy aesthetic, while also reminding of the bike aesthetic. That bike aesthetic is hammered home by the addition of the two chain links on the band for decoration. The links look undeniably like they’re from a bike, and yet are unobtrusive enough for the design to not be loud and garish. However, the biggest triumph aesthetically comes from the decision to hand sew the band together instead of rubber cementing it. The hand stitching makes a piece of normally boring rubber look classy, and goes a long way in making it look like an actual watchband and finished product than just a project for a college class.

Even though this project was successful, there’s always something to improve on for the future. I learned how to hand sew just for the sake of this project, so some of the stitching may not be as tidy as it could be. The inner tube rubber was merely cut by scissors using the seams as a guideline, so they could’ve been cut more precisely. These are both issues that could be addressed next time I do this. And unlike most projects I’ve done, there could actually be a “next time.” The final product looks good enough that with some durability testing I could see myself selling these wristbands. I think people would buy them and they’d make a great gift too. So far I haven’t come across any company who sells them, so it’s an open market. As for this particular wristband that I made for this project, I’ll probably keep on using it to see how it holds up in real life should I consider selling it.