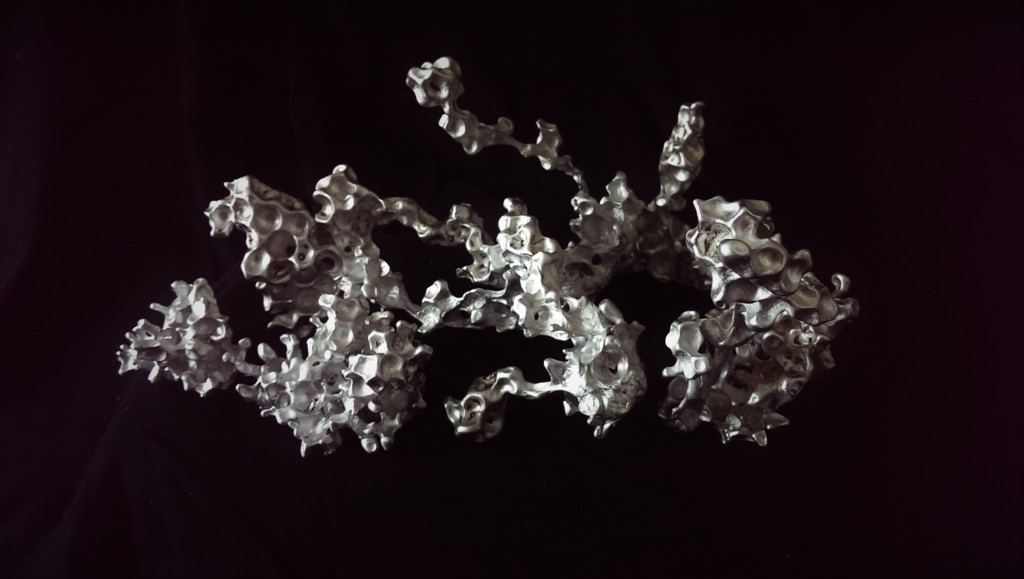 For this Upcycling project, my inspiration came from the Anthillart.com video on making anthill art from molten aluminum.  The fixtures created and sold on the website contained approximately 18 pounds of aluminum.  After facing difficulty locating an empty anthill near Boulder, I decided to try a different approach.  The YouTube artist “The Backyard Scientist” used water polymer beads in order to form his molten aluminum fixtures.  This approach was much more feasible to attempt for this project.

My friend Vincent Staverosky and I had been collecting aluminum cans and had acquired roughly three large garbage bags full of these cans.  Vincent had made his own metal foundry as inspired from Grant Thompson’s “The King of Random” YouTube channel.  Using this foundry the plan was to melt all the cans, or at least until the foundry was nearly full of molten aluminum.  The water polymer beads were ordered through Amazon.com and were originally smaller than a BB pellet.  When placed in a tub of water, these beads could absorb 200 times their size in water within four hours.  The hydrated beads would be placed in a 5 gallon Home Depot bucket where the molten aluminum would then be poured over the beads and allowed ample space to form within the bucket.

After completion, the plan was to use the figure/figures in a fish tank or as a centerpiece/decoration.  It was hoped that the figure/figures produced would be large with very complex and abstract designs. The estimated time to create the molten aluminum sculpture was 1 to 2 hours.  However, the actual time was 9 hours.

The biggest time suck was melting all those cans.  Each individual can took roughly one minute to melt down before the next can could be stacked on top and pushed into the foundry.

The next significant time suck/complication was getting the charcoal to burn and waiting for it to generate enough heat to melt the aluminum (1,221 degrees F or 660.3 degrees C).  That process took roughly one hour.

Finally, once the foundry was hot enough and had melted almost an entire bag of the cans, I wanted to test the formation and pour the aluminum into the polymer bead bucket.  With Vincent’s help, we pulled the steel foundry crucible out and attempted to pour the aluminum.  Unfortunately, there was a thick film of impurities preventing the aluminum from pouring out of the crucible.  This was credited to the liquid residue in the cans and from the thin chemical coating called comestible polymeric coating inside the cans to prevent the liquid from reacting with the aluminum can.  An additional factor was also leading to the formation of this layer of gunk which will be discussed later.

It was decided to try to melt this film and scrape it off once it was at a high enough temperature to accomplish this.  The crucible was returned to the foundry and allowed to heat up to this point.  After the entire crucible was glowing orange we attempted to take it out of the foundry.  With much difficulty we forced the crucible out only to find all the aluminum had leaked out from some portion of the crucible and formed a solid block at the base of the foundry.  The extra “gunk” inside the foundry was charcoal ash that was being blown in through the leak in the crucible by the hair dryer.  The block can be seen in the image below.

After much frustration, we decided to take a break and figure out how to fix the problem the next day.  We attempted to locate another crucible (which was just an empty steel fire extinguisher with the top cut off and bolts attached to the sides).  Unfortunately, a steel fire extinguisher could not be acquired within a reasonable amount of time for a reasonable price so it was decided to attempt to make the current one work.

To overcome this challenge, we reheated the crucible in order to heat the gunk up enough to melt/turn to ash and dump out of the foundry.  After roughly thirty minutes we were good to go and ready to take on the next part of the challenge, the leak.  We had previously made aluminum “muffins” using a muffin pan to cast the molten aluminum last semester when the foundry was first made.  We decided to heat the foundry to the necessary temperature and test the heat by throwing small compact aluminum pieces into the foundry before adding the solid aluminum muffins.  After we achieved our desired heat, we added two muffins and as soon as they had completely melted we pulled the crucible out and poured it immediately into the polymer bead bucket before any aluminum could escape through the leak.  The  resulting piece can also be seen in the image below.

We were particularly thrilled because we had aluminum to cast that didn’t all leak out of the crucible and that the entire process itself was extremely successful in creating a unique abstract piece of molten aluminum.  Ideally, I would have preferred to make a single large figure of aluminum rather than four smaller figures, but given the circumstances I was very happy to have what we created.  The figures the “Backyard Scientist” was able to create are shown below on the left, and ours on the right.

The vision behind these figures was to create a unique piece of art that would not only be aesthetically pleasing but would also have an exciting story to go with it.  The story meaning the process used to create it.  As far as the function, I wanted a beautiful abstract piece with elaborate designs that I could use in a fish tank or as a display piece in my room/house.  I definitely feel like these pieces embrace those goals.

Vincent and I plan on purchasing a real crucible from ebay in the near future in order to continue our molten aluminum endeavors and create larger and more intricate figures from the aluminum.  For now, the figures are being used in my fish tank.