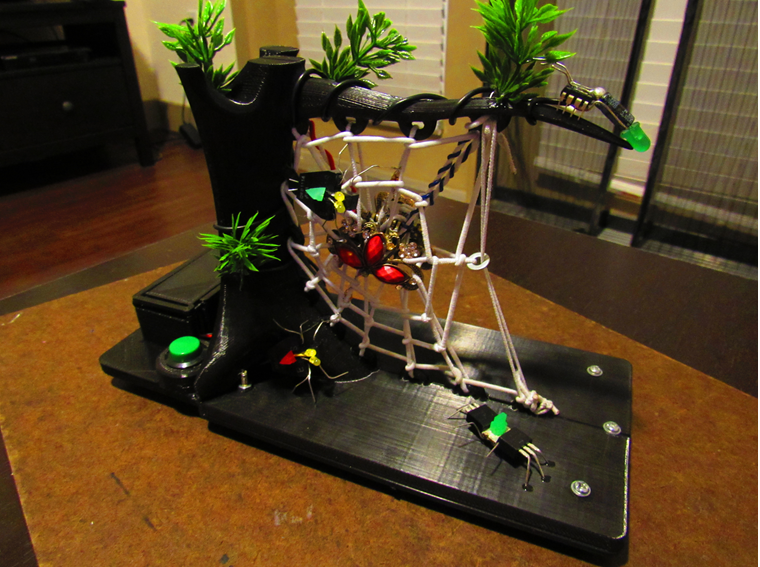 In class two of my teammates and I created an interpretation of the design process as seen in Figure 1.  The process that I followed was very similar to Figure 1 as you can see that the processes is not very linear as some people describe it. The problem was defined in class, we had to recycle and give a new life to remnant material or anything that was obtaining dust. To help me brainstorm ideas I looked around my apartment and found a few electrical components from a few of the classes taken at CU boulder. I then started to do research of what to do, I came across some interesting ideas as seen in Figure 2 and Figure 3.

My initial idea was to create a firefly that would light up with an LED and put it in a habitat. I then started by collecting all the electronic components that I abating from my apartment and I also from the ITLL prototyping room. I found some very interesting shaped LED’s and other electronic components and started creating spiders and my firefly with LED’s as see in the Figure 4.

The hardest part was creating a habitat where I could place this little guys in. I went into the ITLL prototyping room to brainstorm for Ideas and found a rectangular box that was printed in the ITLL small 3D Printers. The Idea came to me I could 3D print the habitat, at least the frame. I started by sketching out and idea of how I wanted everything to look and get put together shown in Figure 5.

Figure 5; Initial Design Idea for placement of spiders and firefly.

The design processes to creating this went from paper to solid works, the final design is seen in figure 6. From experience printing horizontal limbs (Extrusions) in the lulzbot taz 3D printer can be difficult and hard to clean the supports off.

Figure 6; This is a 3D CAD model of how the habitat will look.

The tree was then cut in half so that it would take less to clean and also take less time as seen in Figure 7. Another thing to notice is the hole that extends from the bottom of the base to the top of the branch. This is to reduce the amount of visible wiring that will then connect to the firefly.

Figure 7; This is one half of the tree with a section of where one of the wire will be placed.

In cutting the tree in half created another problem how will the two halves of the three stay together? The solution to this question was to create a base that would combine the two parts together as seen in Figure 8. The shaped cut outs are to place the tree base together without shifting in the Y and X direction. The holes are to stop the Z direction, and make the tree stable. On the back is a 9V battery holder and a place to put a button that will turn the LED’s on.

Figure 8; This is the anchor and spine that brings all of the parts together.

In Figure 9 is an all-around set of pictures showing the final design and shows how it is all put together. One of the goals is to reduce the amount of visible wire to connect all of the components.

Figure 9; This image shows all of the view Isometric, top, sides and bottom.

1st step is was creating the firefly and the spiders with functioning LED’s and a battery that provides enough energy to power 7 LED’s.

2nd step is to create a habitat with manufacturing and assembly intent. Also 3D print parts that will reduce the time and cleanup.

3rd assemble the 3D parts and secure them with screws of your choose of size.

5th set up the placement of each spider and firefly then soldering one component at a time and checking to make sure the LED’s still light up.

Figure 10: Step #1 creating the firefly and the spiders.

Figure 13; Step #3 and four assemble the 3D parts and with string weave it back and forth between the holes provided in the design.

Figure 14; Step #5a set up the placement of each spider and firefly then soldering one component at a time

Figure 15; step #5b checking to make sure the LED’s still light up.