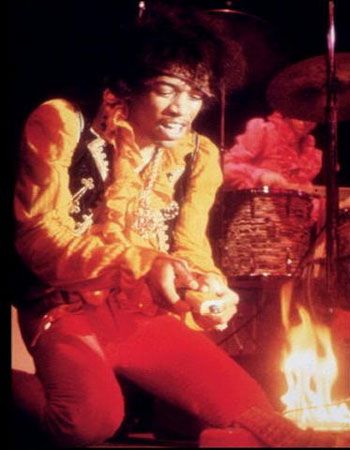 I have been working on playing my guitar more often this semester.  One thing that has helped with this is having my acoustic guitar on a stand in the living room of my house making it easy to pick up for a few minutes here every day as I walk through that room.  While I enjoy playing any guitar my true love is for the electric guitar, but this requires the setting up of an amp, running cables, getting effects pedals set… In short it is a bit of a hassle when I may only have a few minutes to play.  One way I see to rectify this is by building all of the necessary amplification equipment into the guitar itself.  The basic idea is to build a pre-amp (designed to shape and amplify the sound) and a speaker (  After a little more research this is incorrect.  A power amplifier amplifies the signal for the speaker) into the empty body space of an electric guitar.

Now, I would be lying if I said I started with this idea.  My starting point was centered more on an aesthetic which was the inspiration for making use of a guitar.  This inspiration is one of the most rock ‘n’ roll traditions of all time, destroying a guitar.

The above video is a compilation of Pete Townshend of The Who.  He is without a doubt the most iconic guitar smasher in rock history but others have contributed to the aesthetic.  Jimi Hendrix famously lit his guitar on fire at the Monterey Pop Festival in 1967.

Jimi, standing next to his own fire [1]

Eddie Van Halen also contributed in a more aesthetic way with his “frankenstrat.”  THis was a stratocaster guitar he had custom modified (for sound reasons) and then covered in stripes of electrical tape giving it a look of being assembled from many different guitars.

Like Eddie, I hope to build something new and awesome while trying to make it look old, beaten, and road worn.