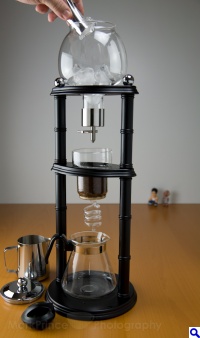 What will it say?

In the end, I hope that this piece says that the user takes his/her coffee seriously. That the individual respects the craft of the brew and that he/she is willing to take the extra time to brew the best cup of coffee. I also hope that it stands out from the crowd of “standard” coffee makers and is able to be a great conversational/art piece as well as functional.

This is partially incomplete, as I am having my friend (also the one who I am building this for in the form of a business transaction) come up with a list of design and function requirements. What we have both agreed that it will do as of right now is that it will let him cold brew his coffee in a more sophisticated setup than he has now. He wants to incorporate a few valves to be able to more easily control how he extracts his coffee. We also agreed that it needed to be easily cleaned. He is determining more requirements and specifications and should have them for me by the weekend.

How do these add up to aesthetic and functional specifications/goals?

The aesthetic behind this project falls into a few categories:

List your inspirations (OK to cut/paste from prior blog). What are you adding that is new?

My inspirations have almost completely changed since I last posted. I will try to keep to my original inspirations of keeping the designs simple, but instead of going modern, I will go much more rustic. I want to incorporate all the design features that my customer desires, while also being able to add my own flare to the design.

What will the hardest/trickiest/critical part be? The part where if it fails, your project fails.

The hardest part would probably be trying to incorporate spiral glass tubes into the design. If I have to make them there is a good chance they can break. I also need this design to be easily cleanable. I don’t think this is something that can be made dishwasher safe, although it’d be nice if it could be hand washed with ease. The second most challenging part would most likely be the stand. It will have to support a good deal of weight (liquids are heavy) and will have a higher center of gravity. This will make the piece more prone to tipping, which is not an acceptable feature to have.

In so
me sense, I already have a prototype. My friend already has a setup where he cold brews his coffee, and I will be using that to help start the design. I will probably make prototypes of the more difficult components during assembly so that I know they will function properly.

This is really dependent on what my customer wants for his features and other requirements, but I estimate the cost to be anywhere from $50 to $125.

I will hopefully have his requirements by the start of next week. Then from there I will generate some concept sketches and let him pick out his favorite designs/parts of a design. After that I will order/procure any materials necessary for the build and begin the process. I imagine that there will be a learning curve to work with glass, and estimate 2-3 weeks to build the components. Then I’ll build the frame and stand, which can take anywhere form 1-2 weeks.