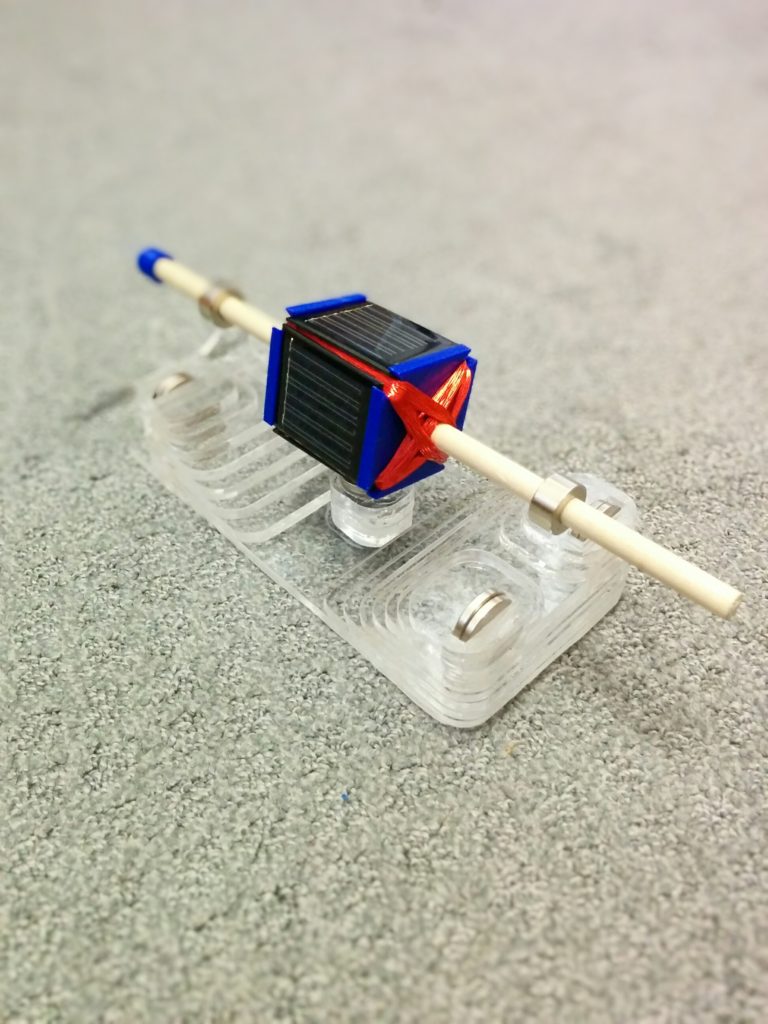 When I was a little kid, I had a globe that you could place between two magnets and it would be completely suspended in the air. I was always extremely fascinated by it, along with magnets in any form. This is what lead me to making a Mendocino motor for my project. A Mendocino motor is a magnetically levitating motor that is powered completely by solar cells. I wanted to make a piece of art that was completely stand alone and would not be constrained by a power cord.

From the get go, I wanted to try and achieve an aesthetic of futurism and levitation. Inspiration for the design was taken from the curvature and design of both the ISS and an F-16 fighter jet, along with the Abyss Table. I also did not want to make the motor too overwhelming, and aimed to keep it looking very clean and simple.

The torque generated by the motor can be described by the equation tau=I*B*A*N where I is the current through the wire, B is the magnetic field, A is the area of the coil loops, and N is simply the number of loops. In order to constrain the design, I chose 30 AWG wire, and solar panels that produce 45mA at 3.0V, and chose to wrap each coil ~300 times each for a total of 600 turns.

The frame for the magnet wire on the motor, along with the tip of the motor rod, were 3D printed out of PLA plastic. These parts were mocked up in SolidWorks and printed on my 3D printer. I had wanted to make the rod itself out of either clear acrylic or carbon fiber, but the tolerances between the magnets and rod made it not possible without machining the rods down and eliminating the polished outer surface. The carbon fiber rods proved to be outside of my budget, so I settled for a wooden dowel as it was a cheap and relatively light weight option.

The completed motor rod with solar panels and wiring.

As far as the base itself, I decided to create a pyramid like structure using laser cut acrylic parts stacked on top of each other. Unfortunately, the acrylic that I had for the project turned out to be cast acrylic which did not cut as cleanly as I would have liked.

Template for the laser cut parts

A final SolidWorks render of what the base will look like.

Over the course of this project, I learned a lot about how basic motors work and some of the math and theory behind them. In hindsight, I needed a more powerful motor for it to start spinning on it’s own or continue for ever. Luckily, those changes are simple to make with a little extra time in the schedule.