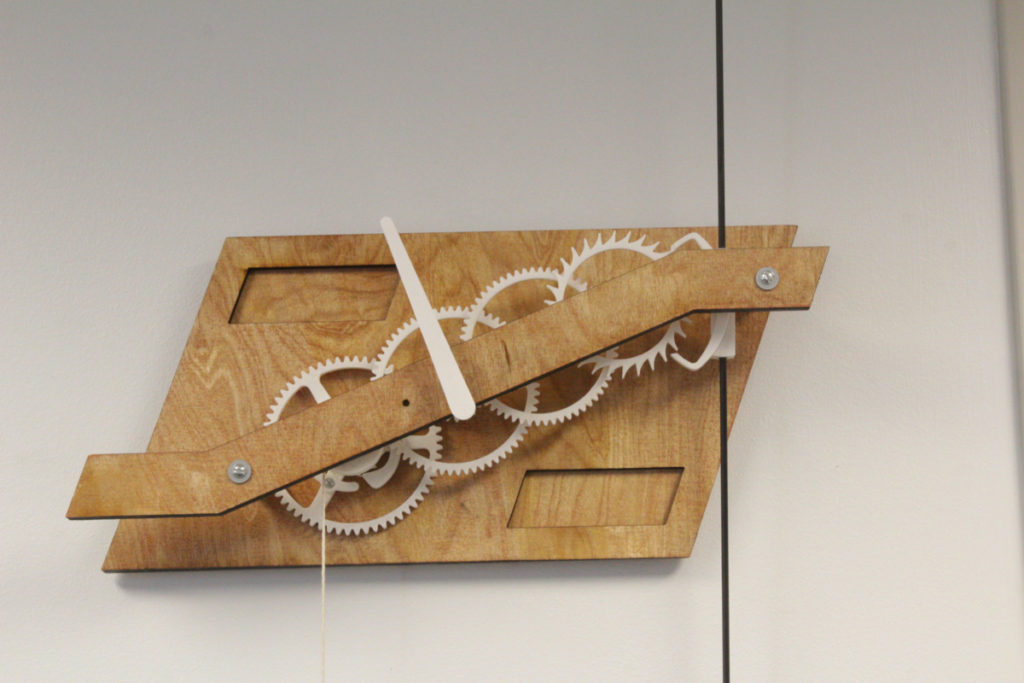 This past semester I really enjoyed building my aesthetics of design project. This was my first clock build, and if I have enough spare time in the future I think it’s a hobby that I could continue to pursue. My original project intent was to make a clock that was visually interesting and displayed the mechanism in an easy to understand way. My final product turned out to be a simplified clock clock mechanism that incorporated a weight, escapement and minute hand. During the project I struggled with the amount of friction in the mechanism, so I reduced the complexity of the clock by removing the hour train gearing (4 more gears). I think the clock looks better with only a minute hand as well. I think it emphasizes that it is an object purely for aesthetic enjoyment rather than accurate time-telling.

The public response to my project was generally warm. People were impressed by the quality of the wood surface finish and they liked the layout. Many people asked me about the accuracy which was a bit puzzling to me given the clock didn’t have an hour hand. This line of questioning makes sense though, for many hundreds of years the best clock was the most accurate. Now, most people have computers and cell phones that are accurate within a second which makes mechanical clocks like these obsolete, except for their aesthetics.

The number one thing that I learned from this semester is that I should choose a project where I have time to build 2-3 design iterations. This project was very time consuming and I think the final product would have been really neat if I had time to build a few more prototypes. In the next clock project I build I plan on using a more precise method to make gears. Additionally, I would upgrade all of the bushings to ball bearings. I found it was important to use bearings that were open and not packed with grease. These bearings have a lower static friction which is critical in a clock, since the geartrain stops and starts once per second. Finally, I would like to collaborate more on a design. I think it would fun to work on a project with a friend or two.