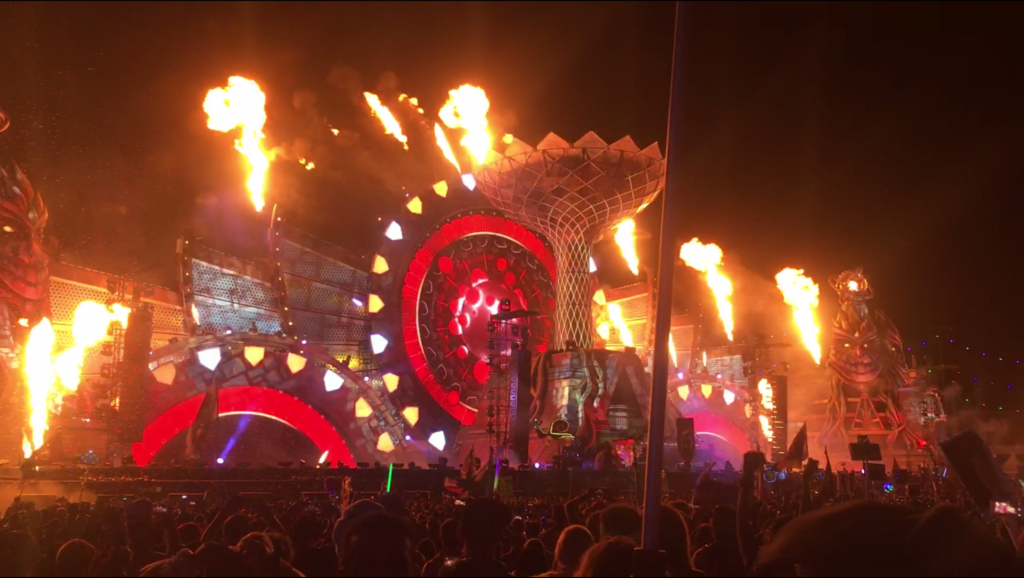 Electronic dance music stages have significantly evolved in design over the last several years from simple lighting setups, akin to what one would see in a standard theater production, to highly technologically advanced productions involving many moving lights and other elements on the stage. The effect is that the light shows displayed from psychedelically designed stages create a deeply immersive experience, and complement the music in their coordinated performance. One particular design element of interest in psychedelically designed stages is the use of projection mapping, which uses a standard projector to project brilliant and sensational visual elements on top of portions of the stage. The main source of inspiration for creating these stages is to create a captivating and visually stunning light show to accompany the music.

The influence for this style is inspired from many places. Technological developments have played a large role in the influence of this type of stage design, with new technologies allowing more stunning effects to be created. Moving head lights and projection mapping in particular are two technologies that see ubiquitous use and have provided designers with a robustly expanded tool set. Generally, psychedelic art has played a large role in this type of stage design as well, with stage designers taking cues from themes and imagery seen in these works. Some of the big players in this space are the companies SJ Lighting and V-Squared Labs. A fascinating feature of this design aesthetic is that due to the popularity and economic success of EDM festivals, there is a very large community of designers working to evolve this design aesthetic through new and innovative designs and the technologies needed to create them.

Amon Tobin is a notable EDM artist who produced a show that uses intense psychedelic effects called ISAM. In it he mainly uses projection mapping over a 3D stage to create stunning effects. THis stage was built and used during 2011 – 2012.

Another example of this design aesthetic is used by an artist, Deadmau5, for his stage the Mau5cube. This stage was created during 2015 – 2016.

Another artist, Datsik, shows this aesthetic on his stage, Vortex Lumen. Most of the design aesthetic for this stage s created using projection mapping. This stage was created and used around 2012.

At an annual music festival, Electric Daisy Carnival, every one of the stages has a psychedelic design. Of the 7 total stages at the festival, here are examples of three of them, which I took while attending the festival during the summer of 2016.