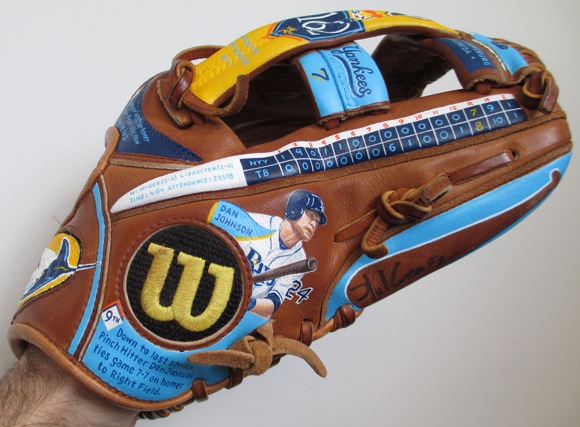 The baseball glove is an item that has been around for hundreds of years. Gloves are a vital part of the game, and have been around almost as long as baseball itself. They have evolved, grown, and changed to fit different demands of the modern sport. The aesthetic of gloves has always been centered around functionality, but players always gravitate towards gloves that are good-looking. The evolution of gloves happened fast, and the aesthetic revolution continues to happen today.

The first baseball gloves looked something like this. Originally, they were just typical leather gloves that would protect the hand and add some padding from fast-moving baseballs. The players would make their own gloves, making them however they pleased. Any leather that was available was used. This often lead to gloves being poorly stitched together, beat-up, and simple.

Baseball gloves slowly added more features and more padding. Perhaps the most important part of the baseball glove slowly started to form, the “webbing.” Bound leather between the thumb and forefinger allowed for a place to catch or trap balls. This, along with the binding of the other fingers together (not shown here) slowly changed the aesthetic from regular leather gloves to a more unique and distinguishable look.

This is an early version of the look that we see in most gloves today. A padded palm to protect the wearer’s hand, full webbing in between the thumb and forefinger, and bound fingers. Gloves like this were also lose enough that they could be squeezed together, stopping the ball inside, instead of just catching it on the palm. Models like this paved the way to current gloves.

The catchers mitt is the most unique version of the baseball glove. These gloves have the most padding of all, since catchers consistently catch high velocity pitches. The thick padding on the sides also helps keep the ball from popping out once inside. The webbing is usually tight and concise. Catchers mitts are much smaller than other gloves.

A fist baseman glove also has a unique design. The first baseman has to make different catches than any other player, so the glove is modified to reflect that. The curved edge helps to pick balls out of the dirt smoothly. It also has a very deep pocket. Notice how deep and wide the webbing is in between the thumb and forefinger. This is a special aesthetic. A symbol of pride for first baseman is how deep their pocket is. The first basemen glove is different from typical gloves.

Another new trend in baseball gloves is highly customized pieces. Players often wear gloves that have their team colors, as opposed to traditional black or brown leather. This is an exaggerated example, but players get more creative every year. It is not uncommon to have names, initials, jersey number, team names, or special colors on the glove. Gloves are becoming a fashion statement for some players.  They use it as another way to look good while playing.