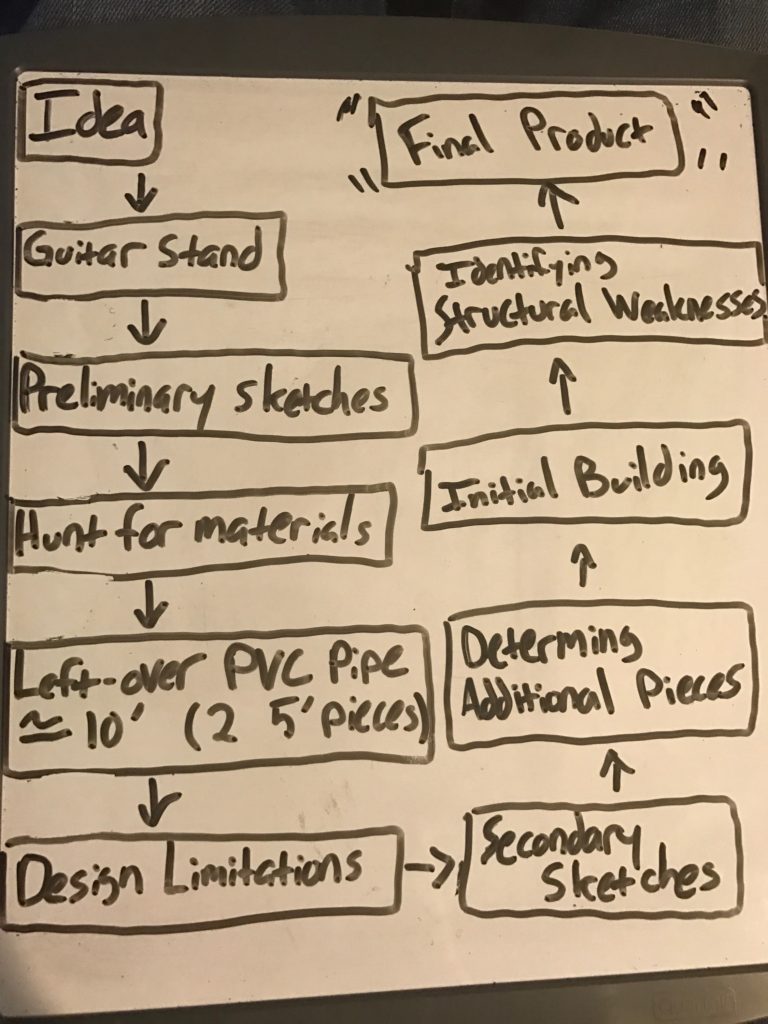 The design process naturally varies from project to project. For this project, I spent a lot of time thinking about what to make. I wanted something useful, and that I could use on a daily basis. At first that does not seem like a tall task; however with the limitation that it had to be made from remnant materials, it became quite hard to brainstorm. Eventually I decided to attempt to make a guitar stand that could be used for either acoustic or electric guitars and since I currently have an electric guitar that I built from scratch, it seemed fitting to have a stand that I built from scratch as well.

Initial sketching went well as I found several designs online that looked fairly simple and sturdy. When I started the quest to find materials, I had a lot of trouble finding materials that would be easy to work with, yet could support the weight of a guitar. While looking through the shed, I found some old PVC pipe that my landlord had used to make a sprinkler system for the garden. I immediately emailed him and asked for his permission to put it to use. Since there was only 2 pieces of pipe that were roughly 5 feet in length, it put several design limitations on my idea.

After some secondary sketching, I had a design that used about 8 feet of pipe and had laid out which pieces to cut from which pipe to ensure that I could make the guitar stand. After I had pieced together the puzzle that was a guitar stand, I placed my guitar on it and watched a piece PVC pipe that was connecting the part of the stand that holds the guitar to the base had slid out of its housing. This was a weakness of the design, but was quickly remedied with a trip to home depot for some PVC cement. Some cement in the joints strongly secured the pipes and connectors.