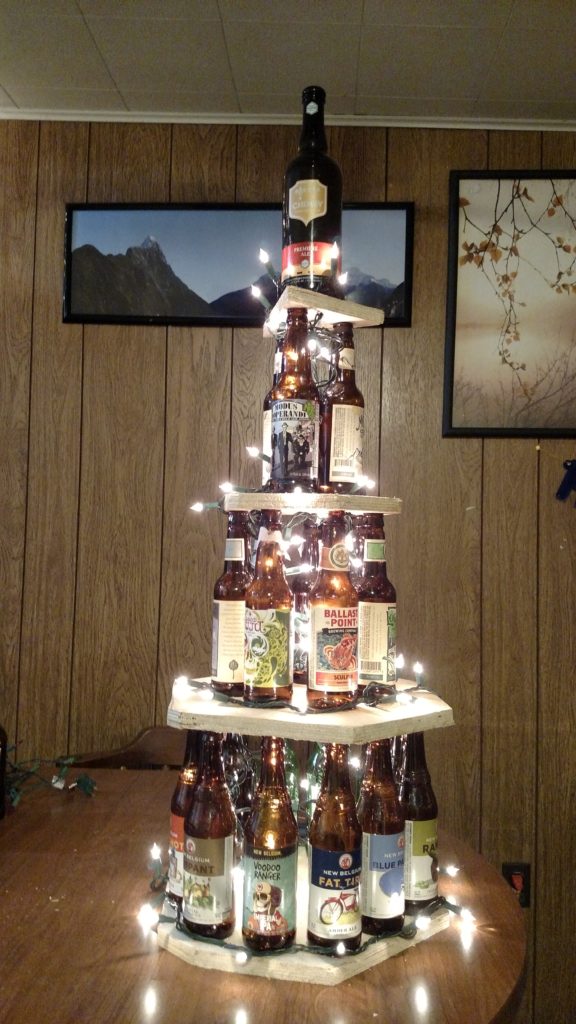 The bottle tree has always been a project that I wanted to complete. Originally I had seen a similar design at a friends house and thought, “What a creative way to reuse old bottles!” Ideas started bouncing around. First, it was to display some of the better drinks in my opinion. Next, to be a lamp in a fairly dark room in my house. It was then onto a rotation structure so no drink was left in the dark. I also wanted to build something that fit into the college life aesthetic in my house. From here the idea festered more until the Upcycle project surfaced and gave me the proper motivation to complete the bottle tree, or bottle cake if you prefer.

Once the upcycle project surfaced, I started brainstorming the ideas that I had above. Lights became a necessity, along with the bottles and wood for the stand. There wasn’t much more brainstorming and from here went to sketching. The first sketches were with bottles and circular pieces of wood.

These ideas also included, cutout in the wood for placement of the bottles, on both top and bottom. The lights would then be run within a groove on the bottom of the 2nd, 3rd, 4th, etc tiers of the structure. However, those ideas were quickly shoot down due to the availability of the tools I had. They turned into just placing the bottles on the wood and placing the lights between each bottle, ideally from the inside.

From here it was on to my material selection. I had a bunch of plywood laying around my house and was quick to think how I would use that in the design. This wood would be for the tiers of the tree. I had also been collecting a bottle or can of every different drink I had tried. The top of my fridge was getting cluttered and this project was a prefect time to clear some of that clutter off. Lights were also laying around my house. The epoxy I had to run home and take a partially used bottle from my parents (shhh, don’t tell them 🙂 ).

After searching my house a little more I found a nicer piece of wood, seen already cut above. I also discovered that every company has different sized bottles. This was with exception of a few. Seen above is the grouping I was planning on using for each tier of the tree (yes I thought it was appropriate to include the cups 🙂 Luckily I didn’t have to employ anyone to help me obtain more bottles and had enough on my fridge.

Once I was ready to start cutting the piece of wood I had found, I made sure that it would work. This lead me back to another sketching phase in my design process. This time adding dimensions and placement of all the bottles. I also switched from circles to a hexagon. This would be easier to cut out than trying to make a circle since I only had a hand saw.

From here it was time to get sawing. I cut out the squares first, and then moved onto the triangular parts. The final cuts can been seen above. Yes they turned out more like a octagon, but hey that was with a hand saw and rough measurements. Once the pieces were completed, I moved onto laying out the bottle on each tier just to get an idea of what it would look like.

After this it was onto epoxying each bottle to the wood. I built up layer by layer until the top, where I had just enough epoxy left to complete it. Lights came next. Originally I was planning on using colored lights, but after a test of wrapping them around, I decided on white lights. I started at the top and worked my way down. A light went in the gap between bottles and a bunch went inside  each tier. Staples were used to hold the light strand in place. Finally I plugged it in!

The initial lighting stunned me for a sec since it came out better than I was expecting! I stood back and took it all in. I had successfully completed my goal of creating a bottle tree that fit within my college house aesthetic. It was able to generate a surprising amount of light and even gave the bottles a glow I wasn’t expecting.

With all projects come ideas that you want to add onto the final product. One would be to try and incorporate some sort of spinning mechanism. Next would to be attaching the lights as I built the tree. This proved to be fairly challenging since I had to feed the light through the bottles along with stapling them to the wood. another thought, was that I could always keep adding on as I collect more bottles. But for now, it will be a great piece lighting up my house!