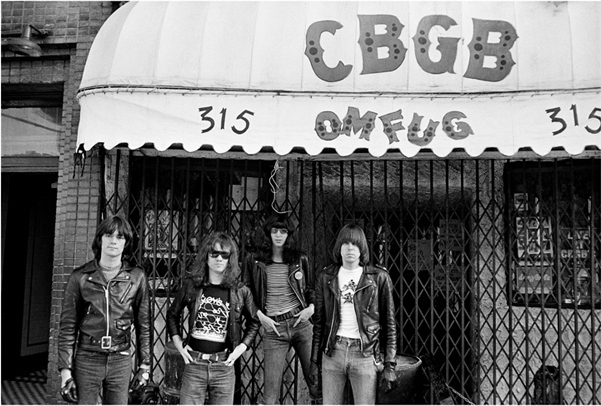 I came to the punk scene through bands like Blink 182 and Sum 41 in mid 90’s. The songs were well-produced, the lyrics were unnecessary, and the videos were intentionally childish. The trappings of traditional punk were present (fast rhythms, screaming vocals, and haircuts that were only appropriate in jobs that required hair nets), but the punk aesthetic was formulaic and contrived.

Punk in the 70’s in New York was much dirtier. Bands from around the country flocked to venues like Max’s Kansas City and CBGB’s to plug crappy instruments into terrible speakers to play indecipherable music at dangerous volumes to crowds of equally juvenile-minded reprobates. It was very common to experience violence, bodily fluids, and lewd acts on stage.

Lyrics embraced the anti-establishment lifestyle of the disenfranchised; punks lauded people who existed outside the bounds of what was considered “normal and acceptable” for “upstanding citizens” at the time. While bands in the 80’s and on became very opaque with their political agendas, 70’s punk was more concerned with exposing the fringe of society with respect for the humanity of those citizens who dwelled there. Born in part of the Andy Warhol aesthetic, and more directly from the Velvet Undergound, their politics were informed by a certain irreverent disrespect for the culture that they were brought up in.

Visually, we are reminded of photocopied concert posters on 8.5×11 sheets of paper hastily stapled to electrical poles by groups of teens wearing studded leather jackets and white Chuck Taylors, but this betrays the truth of what was considered punk at the time. While the Ramones most certainly were a defining part of that scene, bands like Blondie, the Police*, and the Patti Smith Group were more characteristic of the sentiment behind the movement. You could belong to the identity if you were willing to thumb your nose at what was expected of you. That’s it.

You could, if desired, actually care about melody. “Psycho Killer,” by the Talking Heads, lyrically portrayed the mindset of a psycho killer while bouncing around between poppy drum-vocal-base interludes and a lofty guitar-backed chorus. While the Dead Boys were known for cutting themselves on stage, Lou Reed incited the genre with songs about transvestites (“Walk on the Wild Side”) and having enough rhythm to be black (“I Wanna Be Black”).

Punk was dirty, but it was not defined simply by the outward appearance of its members. The characteristic torn jeans and intentionally unkempt grooming was only one indication of the contempt punks had for their society. The aesthetic was simply a philosophy of criticism and the scene was a crucible that created the space for genres less concerned with populism.

*The Police were from England, and were part of that scene when the formed from the ashes of Curved Air, but they played some of their first shows in the United States at CBGB and helped define the sound at the time.