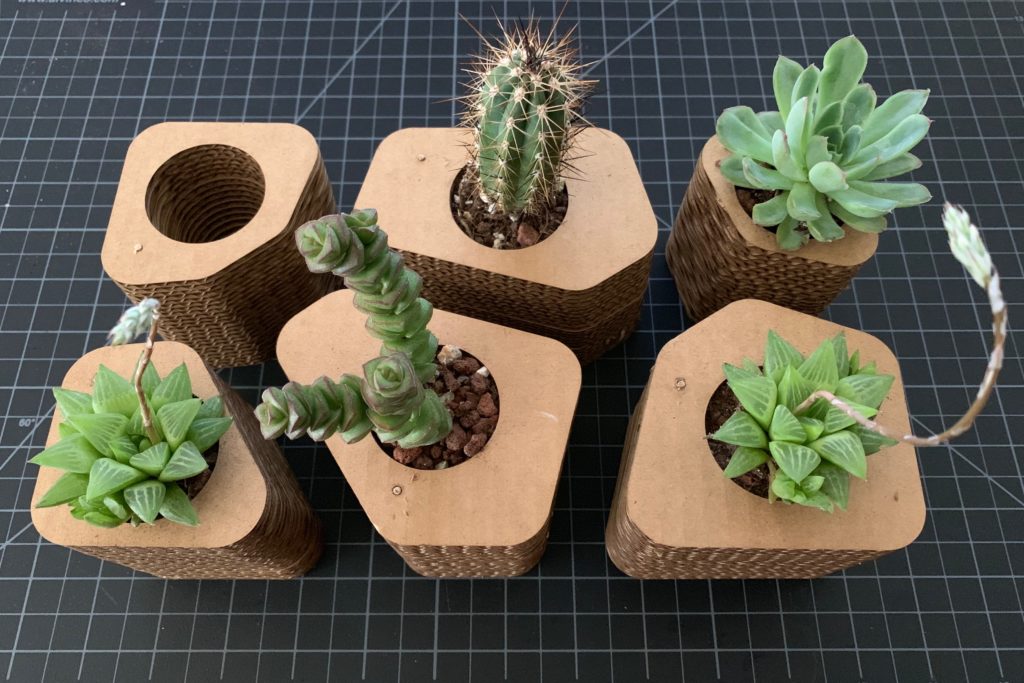 The first step in my upcycle project was picking out what materials I would use. After looking around my house, I gathered some cardboard, plywood sheets, twine and a couple of mason jars. After looking at past upcyclying projects for the class I decided that I did not want to use wine or beer bottles since it seemed like they were a popular choice for this project and I want to create something different. Although I was able to gather all these different materials, I was going to need more of them. I decided to use cardboard and mason jars as the materials I would be working with since they are relatively easy to find.

After writing a blog post on organic design, I knew hat I wanted to apply that aesthetic to my project in some way. The fluid lines and inspiration from nature really draw my eyes to that aesthetic. Someone also suggested in my blog post that I look into generative design since it has some connections to organic design. After researching generative design, I was more drawn to the patterns that are created by these algorithms rather than the form itself. They look very natural and this is exactly the inspiration I needed. This aesthetic did not manifest into my first couple iterations but came back in the end to influence my final piece.

The last piece of inspiration that I looked to was patterns found in nature. I find fascinating the complex patterns that are found in nature. In some patterns specifically, there seems to be a natural order in randomness and it’s beautiful. The only problem is I had no idea how to replicate these patterns in CAD software. Exploring all of these various natural aesthetics, I realized that I had no living plants in my room or house. This is when I decided I wanted to make a set of planters.

Before I could start making anything, I knew I had to collect more cardboard. I stumbled across the shelves of book boxes outside the UMC one day and began bringing back a couple of boxes everyday. At home, I would break them down into two useful pieces. My next step was to start brainstorming. I knew almost from the start that I wanted to apply the tools I was learning in my classes to the projects in this class. Luckily, I’m in a form class learning how to use Rhinoceros which is a very powerful software for organic design. I began putting down ideas in my sketchbook. After I had some initial sketches, I started transferring them over to Rhino to explore them some more. At this point, my experience with Rhino was very minimal but I was able to create some shapes which I liked.

After my design was complete, I had to open the files in a slicer program in order to laser cut the cardboard. Each iteration took about nine pieces of cardboard and around forty minutes to an hour to laser cut.

I had my first planter made and I was pleased with how it turned out until we had a lecture on how humans are more drawn to curved/smooth objects, while sharp objects incite fear. I had to go back to the drawing board since I wanted my final piece to be an accent piece rather than draw a lot of attention.

My second iteration was based of a honeycomb structure but with very rounded edges. However, a quick google search showed me that I was the one millionth person to think of this idea. OOPS. This is also when I realized that if I wanted to make a lot of these to fit together I would need an absurd amount of cardboard. At this point, I discarded my original idea of incorporating a mason jar into the design since it was too big and restricting the shapes I could use.

I was back to the drawing board, but at the same time I was exploring the visual scripting plugin for Rhino called Grasshopper. I stumbled across a mathematical pattern called voronoi and this is exactly what I needed for my project. I drew a very rough sketch of what I wanted to do with this and dove directly back into the program.

I was very pleased with how the final piece turned out. I was very frustrated at certain points of my design process but I just needed to keep working it through. My final piece was a set of six planters that were created with a voronoi diagram. I think that it pulls some aspect of all the the aesthetics I was exploring for my inspiration. Although I am done with project for this class, my next step is to create some 3D printed molds which I can make pour some concrete planters.