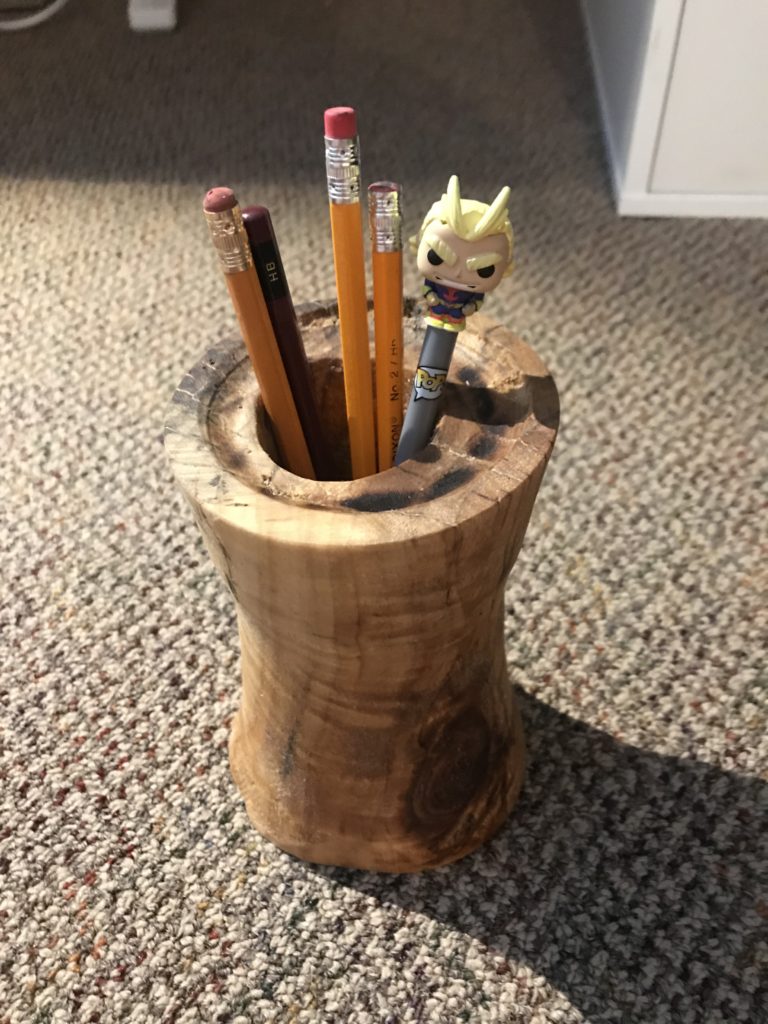 To begin this project I thought about which material I wanted to use. I wanted something that gave me a lot room for creativity and didn’t push me into a certain style. I also thought about what functionality do I want to get out of this project and not make something that has no purpose outside of class. I came to using wood because I felt it gave me that creative space that I wanted. I wanted it to first, be unconventional and second, be useful for me. That’s when I started thinking about designing a wooden cup, but not just any cup, a cup with a functional design. Big enough to be close to a beer stein but modeled differently. At first, I planned to carve a skull into the cup to where you use the eyes and the nose to get a firm grip on it. I was still in the process of fully solidifying how I wanted the orientation, the rim, and the inside of the cup to look. I obtain a nice enough piece of wood from my boss at work. After explaining what I was planning to do she told me that they had wood left over from a tree that was cut down in their neighborhood and she brought me a big enough piece to work with shown here:

Noticing all the cracks in the wood I began to think about applying some colored epoxy to give it a nice contrast and fill in the gaps making the wood easier to work with. This is what started to change my ideation from the skull cup to something related to trees or snow adding in epoxy to create a nice design along with some ergonomic design to the cup. You can see my planning through this picture here:

I obtained some epoxy resin and hardener from my group mate Andres and cleaned the wood to get it ready for the epoxy. I soon realized that epoxy isn’t easy to work with and how badly temperature changes can affect the curing time. With the recent storm and heat not working in my apartment the first round of epoxy took five hours to cure and the result wasn’t all to great for the purpose of filling the cracks as you can see here:

The big crack down the middle did not fill up at all and proved to be the main source of problems down the road. The reason for the different color in the epoxy was that it was mixed with some acrylic paint to give it that contrast and to represent roots in the dirt.

Finally, I found the time to work on the wood in the ITLL’s wood shop space they have in the basement. When I first brought the piece of wood in they thought that the wood was going to be to damaged and cracked to be a viable piece to work with, which is fair but being an upcycle project I wanted to work with wood that would otherwise end up thrown away, but they decided to at least trim the wood down to see how the internal material looked and using a band saw began to trim it down to size revealing that the wood itself was nicely dried and besides the big crack that propagated through most of the wood could be of some use. I decided to take the piece back and try to once again seal the crack in the wood to make it more viable for a drinking cup. Once again I realized the difficulties in working with epoxy as most spilled out from the wood despite my slow pouring to fill the gap and seal it with aluminum foil as seen here:

It proved really frustrating and also pushed back my work time by a day since the epoxy still took an hour and a half to harden this time (fixed my heating). Still the gap was not filled.

The next day I was able to bring it back in and to supposedly make lathing the hole easier we picked the biggest drill bit and drill the hole into the wood first:

The size of the hole was decent enough as so I started putting the wood up to a vertical grinder to create a cylindrical shape and trying to center the material around the hole to avoid big jumps in the lathe:

I created a very nice shape and started to work with the piece on the lathe. Being my first time using a lathe I was a little nervous about the wood exploding or breaking any of the carving tools as you apply them by hand.

While working one of the ITLL employees made a comment about how I’m working on a holy grail which inspired me to create curves in the wood to give a similar shape while still looking natural. There was also the limitations from the hole that we pre-drilled beforehand so I could not create any thin points in the cup. Attempting to work on the hole inside I found that the pre-drilled hole made getting the shape harder so I settled for creating a thin indentation on the top. The finished product after the lathe look like this:

At this point I thought about how the finished product should look. I abandoned the concept of adding epoxy on the sides because the wood itself showed very nice designs and knots along with the crack itself. I started to enjoy how nice the wood itself looked and didn’t want to use a dremel to etch designs that could take away from that. I could not control abandoning a viable drinking cup with how bad the crack went to the hole so the cup itself is used for holding things like pencils, etc. The only items I needed to purchase to finish this project were a couple grinder bits, mineral oil, and beeswax amounting to about $20. With the grinder drill bits I was able to make the hole look more centered as shown in the title picture. I took some sandpaper from the ITLL and began trying to make it as smooth as possible and achieved removing any possible splinters. The wood itself still has a rough feel to it. The beeswax and mineral oil I applied a few times and let sit which helped to lock out moisture while giving the wood a nice natural color. Originally the mineral oil was to make the cup food safe but that was no longer a requirement for it.

The inspirations I took throughout the project always related back to nature. How skulls look buried, how the roots look in the ground, and how the snow looks on the trees. Seeing natural art like this outside really helped push me along:

The project itself was really enjoyable and proposed a lot of unforeseen challenges. I knew the wood would prove difficult being as its not something I went and purchased so there would be a lot of imperfections. If I had to redo this with no restrictions I would buy quality wood and avoid drilling the hole to start so I could make a higher quality version of this.

My presentation for this project can be found here: