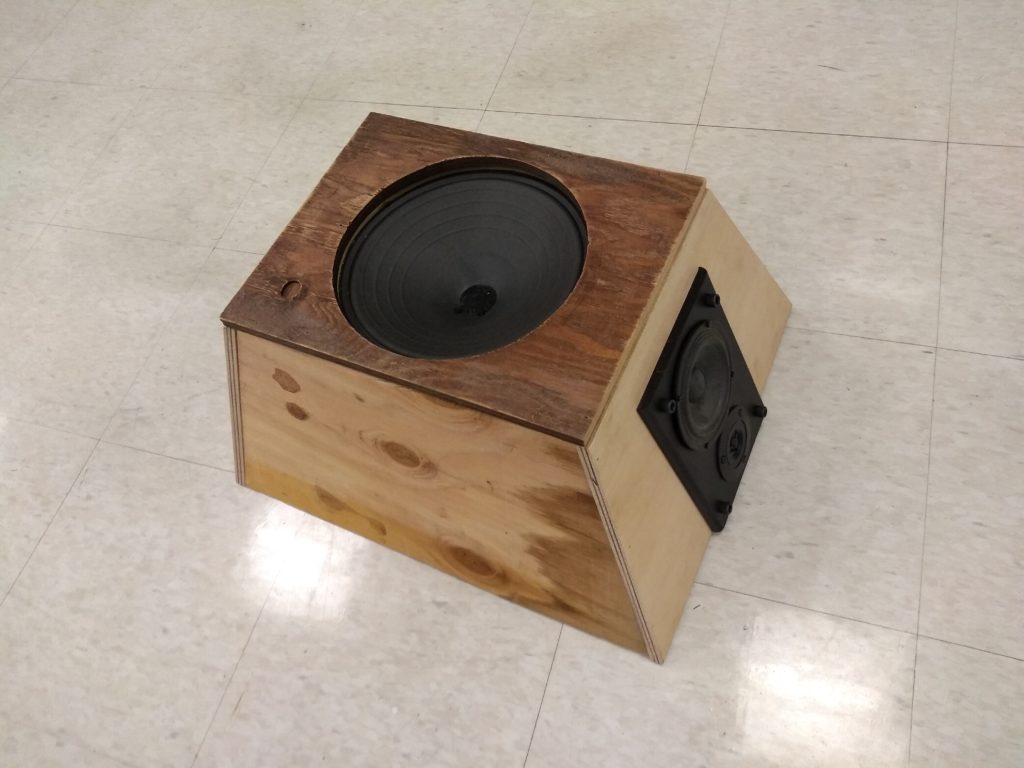 Inspiration:
After making a three-dimensional pattern of lids, I had cemented an image of a sort-of chandelier of repeated circles. In addition, Prof. Hertzberg and I will be putting on a demo of Dancing Oobleck. We will use an industry-standard shaker table for the final demonstration, but it got me thinking about if I have old speaker cones that I could put to good use. Given the aesthetic (patterns of circles) and the material (speaker cones), perhaps I could make a conglomeration of speaker cones? I vaguely remember an album cover that was like this, which turned out to be The Crystal Method’s album Divided By Night.

Greebles Aesthetic:
I was going for an aesthetic similar to what William Cordova pulled off in his piece entitled macchu picchu after dark (above). I wanted to create a funky, hashed-together look with a bunch of little parts that look like they might do something. In the film industry, these parts are called greebles; a term coined in the making of Star Wars to describe the details on a droid or starship.

Design Process:
To say that my design process was flailing all over the place is an understatement, but through each iteration, the design picked up some common themes. It also became easier to find what I was looking for the more I contacted potential suppliers.

Initially I had envisioned an upcycling project that would use either water bottles or these 3-inch dia. lids in repetition to make a sculpture. There’s a caveat when it comes to upcycling: It had occurred to me that I really needed to stake claim on someone else’s trash in order to use it in my “treasured” art project. Water bottles are a fantastic material due to their relative cleanliness, but the mentality of the average person in this world is to throw it away. Thus I could not find enough water bottles without laying claim to them ahead of time.

This happened again with the lids; I found my first few in a “FREE” box of old school supplies, wrote my name on the box for later pickup, then neglected to pick up the box before it was thrown away.

The third time that I attempted to look for materials, I was increasingly successful. I started with an old jukebox speaker from my mom then curated more and more old speaker cones. They were very easy to mount onto a sculpture, so I just picked up some scrap wood from the woodshop and started designing!

The design went from a four-sided antiprism (fourth image, above) to a tapered rectangular prism for ease of manufacture. The tapered part was still difficult, but it provided a sense that this was no usual speaker.

Below is the project in its current state. My functional goals for the project was that it would be sized to wear on my back and that it would emit loads of sound. Some people comment that I have an unusually heavy backpack, so I thought it would be cool to make a giant speaker/amplifier setup that could be worn on my back. Thus, all the heaviness would have a single purpose: to emit sound! It is sized to be worn on my back, but currently does not have an amplifier or battery attached.

As for my artistic goals, it seems I have matched closer to William Cordova’s style than to The Crystal Method’s style. It definitely has a “workshop” aesthetic. It looks too symmetric to appear like there’s greebles sticking out every which direction, but has efficiently conveyed an unusual look. There are speakers pointing in odd directions and their sizes are mismatched.

Future renditions for this project include adding more speaker cones. I had just received a box of small speaker cones form a friend the night before the presentation, so there wasn’t time to add them. The side panels have placeholders for additional speakers when I am able to add them. I would splash bright neon color paint on the wood to make it look more detailed. This would also prepare it for the Thursday Night Bike Cruiser rides in Boulder, which I have regularly attended. Many colorful artistic displays are shown there.

Here is the video of my presentation!