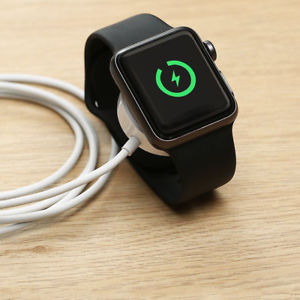 I have decided that for my final project I would like to create a wooden dock that can hold and charge my Apple Watch. I have found that the charger for the watch is clunky and hardly ever stays flat on a table so this design would solve that issue. I also have found that the watch itself often pops off the charger because it is only a magnetic connection so creating a stand would allow the watch to sit flat on top of the charging dock. This would alleviate a few of the charging issues I have with the watch as well as be a great design aesthetic to go along with the rest of the hand crafted furniture pieces in my room.

In general this is what charging without a dock looks like. The charger can easily fall off the back because it is only a magnetic grip and the watch itself falls over constantly. Not very useful if I use it as an alarm clock or wake up and the watch is nearly dead.

My inspiration came from these style of Apple Watch Docks but they were extremely expensive and unnecessary because I already have the charger. It also doesn’t fit my style and I enjoy the challenge of crafting handmade things rather than just buying them.

I am obviously no artist, but this is the general style I was hoping to go for. This would be made out of wood using hand tools. The magnetic charging dock would sit snugly in the top just under the watch and the watch would snap onto the dock. This would allow the watch to sit upright, how I wanted it, and be something very easy for me to keep on my nightstand. The cord would most likely need a track that goes from the dock to out the bottom, but doesn’t need to be visible from my side. The dock would need a fairly wide base so that it can’t be knocked over so I have also considered putting a small steel plate on the bottom that would prevent it from falling over. I would also like to decorate the wood with either burn marks or crevasses filled with colored epoxy. Either way, this will be a challenging project because of the hand tool skills needed (of which I don’t have much at this time). Hopefully by the end of this semester I will have exactly what I imagine.