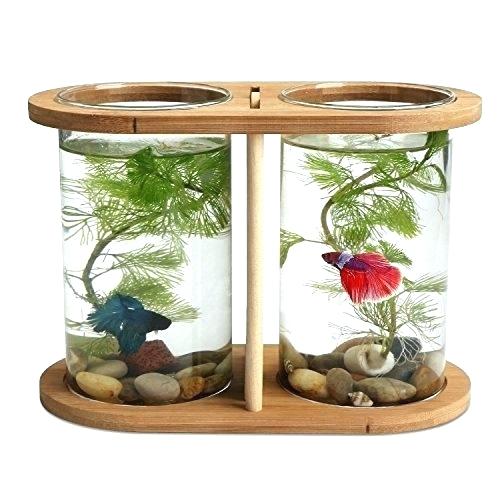 The inspiration behind my main project came from my beta fish, Doug. Me and my roommate bought Doug at the beginning of the year and we have grown to love him like a son. Doug currently lives in a small round fish tank that we bought at PetCo. When we bought the fish tank, the cashier told us that, while this tank would work for the short term, we would eventually have to move him into a bigger tank. We eventually got busy and neglected to do so.

As time went on and Doug got bigger, we began to realize that the fish tank was a necessity. In addition, I learned that fish often get depressed in round tanks due to the fact that the outside world is warped and it confuses them. Because of this, I want to build Doug a new fish tank. In addition to Doug, we have another beta fish named Jeff Probst. Jeff also lives in a worse tank than Doug because we adopted him from a friend. I want to create a fish tank that can house both of them separately but be able to only clean one tank.

I was looking at old project ideas for inspiration and I came across the multilevel fish tank. I really liked the idea of being able to suspend a fish above water and think that this would be a cool way to keep the two Beta’s separate so they don’t kill one another.

I plan to use clear acrylic to create an open top fish tank with another fish tank in the middle that could be removed and cleaned separately. This would also allow the fish to see one another without killing each other. I also plan to incorporate geometric shapes with the addition of natural leaves and plants in order to create a contrast between a nature aesthetic and a modern aesthetic. Finally, I plan to use fake rocks to create a waterfall which will be my dynamic element.