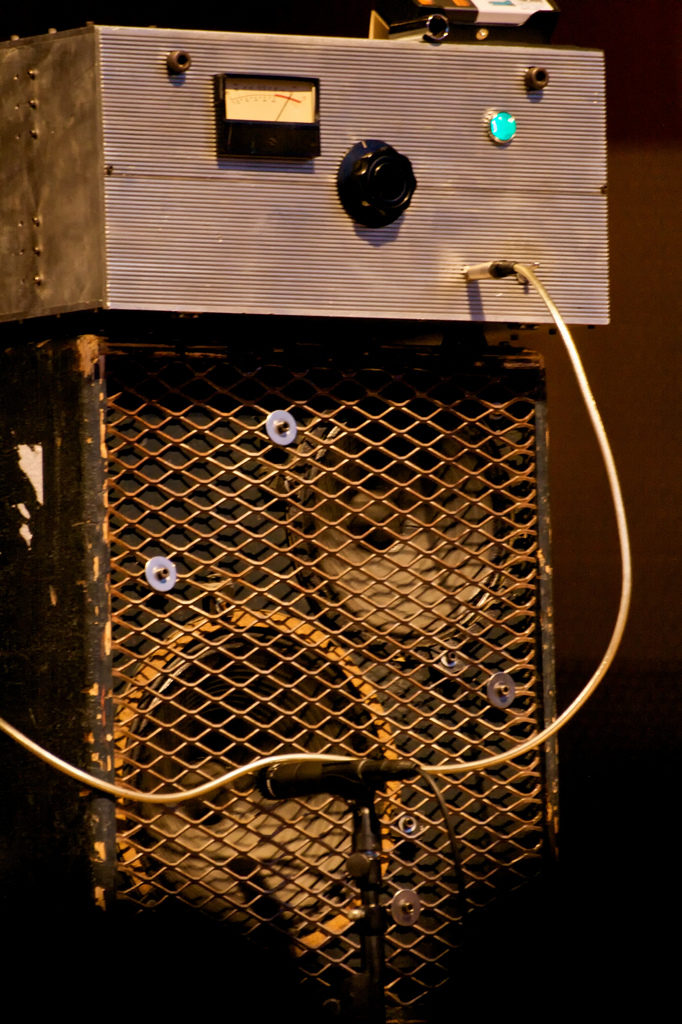 Since this final project has to have a dynamic element as part of its design, I figured I could incorporate one of my interests: guitar amplification. I’ve wanted to build my own guitar amplifier for some time now, and this project gives me the perfect springboard to work on one.

In the realm of guitar amplification, there are two types of amplifiers: solid-state and vacuum tube. Solid-state amplifiers rely on small, solid-state transistors to amplify the guitar signal, while tube amplifiers use – you guessed it – vacuum tubes to amplify the guitar signal. Vacuum tube amplifiers have been around since the very beginning of electric guitar, and are have been making a comeback in the wake of the cheap transistor amp explosion of the ’80s and ’90s. Both types of amplifier effectively accomplish the same purpose, but a solid-state amp will likely do it cheaper and more efficiently than a tube amp. However, tube amps are known for their musical “mojo” – they’re electrically very simple and, when pushed to saturation, distort in a musical fashion that adds overtones atop the guitar signal.

With this dynamic project in mind, I want to design a tube amplifier to my own specifications. First of all, I want to keep it simple – low wattage, minimal controls, and keep the number of vacuum tubes to a minimum. Secondly, I want to incorporate all of the creature comforts that I’d like to see in an amplifier – high and low inputs, multiple gain stages, a Baxandall tone stack, a master volume, effects loop, so on and so forth. Aesthetically, I’m primarily inspired by the guitar and bass rigs of the band Shellac (shown above), which have an amplifier enclosed inside an aluminum box with a single knob and VU meter, one input jack and one indicator lamp – no frills, nothing to screw up.

Going into this project, I have a couple of options for building an amplifier: clone an existing circuit, or develop my own. Initially, I was considering building a copy of a Fender Champ or Princeton amp, a very simple low wattage amp that everyone and their dog has copied. However, that didn’t leave me much room for me to experiment; instead, I decided it would be a better idea to design my own circuit from the ground up.

In designing an amplifier, there are a few main stages to consider: the pre-amp, the power amp, and the power supply. The pre-amp amplifies and tonally tweaks a guitar signal before reaching the power amp.

In the case of the above block diagram, the pre-amp consists of the two inputs, two gain stages, and EQ section. The guitar signal passes through one of the two inputs (“Hi” will be louder and voiced for guitar, while “Lo” will be quieter and voiced for bass), a gain stage with a controllable amount of volume, a Baxandall tone stack (audio style EQ, when both knobs are set at noon the signal is flat), and finally through a second gain stage with a fixed volume. Before the signal reaches the power amp, it can be attenuated with the master volume control, a simple potentiometer between the two stages. Finally, the signal passes through the power amp and is amplified to speaker level, and is output through one of two parallel jacks.

This initial block diagram was a good start, but I felt it left something to be desired. Returning to the drawing board, I wanted to approach the pre-amp differently. Rather than having a “Hi” and “Lo” input, why not have a “Hi” channel and a “Lo” channel, which could be used independently or in tandem?

In the case of this second block diagram, the pre-amp has changed a bit: instead of having a “Hi” and “Lo” input, there are now “Hi” and “Lo” channels. The “Hi” input is controlled with the “Hi Gain” knob, while the “Lo” input is controlled with the “Lo Gain” knob. Additionally, I added a third input to connect both channels in parallel, allowing for both controls to function, which will produce more gain and distortion in the pre-amp before the signal reaches the power amp. The signal still passes through the Baxandall tone stack as it normally would, and then through a fixed gain stage.

I feel like this is a far more interesting design, and it should allow for more tonal variety with its parallel channels.

Aesthetically, I would like this amplifier to be minimal yet interesting, and interesting yet functional. Minimal control schemes come at a cost – will the user be able to interpret the controls and use them gracefully?

I wanted to keep this amp small and simple, so early designs see a minimum of controls on the front panel with simple labeling. One big drive knob, one big master volume knob, and two smaller knobs for the bass and treble controls. However, as my designs progressed, I had to update the appearance as well.

Replacing the single drive knob with two new controls for high and low gain required a re-working of the faceplate and a re-evaluation of how the controls should relate to one another. I wanted to make it obvious that the Hi input corresponds to the Hi Gain control and that the Lo input corresponds to the Lo Gain control, so I turned to one of my personal favorite amplifier manufacturers for inspiration: Sunn.

On the Sunn Beta Lead and Bass amplifiers, plugging an instrument into a channel will turn on an LED corresponding to that channel, indicating it is in use. Additionally, the Sunn Beta has two channels with a parallel input just as this amp will, and plugging in to the parallel input turns on both LEDs, indicating that both channels are active. I plan to incorporate this concept into my own design with the help of stereo input jacks – when a 1/4″ cable is plugged into one of the two channels, the channel’s LED is connected to ground and lights up, indicating that that channel’s control is active. When a 1/4″ cable is plugged into the parallel input, both channels’ LEDs are connected to ground and both turn on, indicating that both controls are active.

I still have a lot of work ahead of me, but the next big step is developing the circuit, prototyping it, and making sure it works.