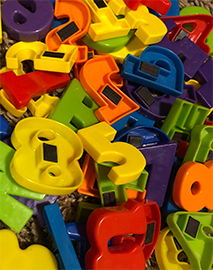 At first I had no idea what I wanted to do for my up-cycle project, however I love clothes and I really want to get into making wearable technology because that is the future. I realized that I could not make wearables because I didn’t know how to build circuits (now I do!). So I went to ARC which is a thrift store and looked around for inspiration, and I stumbled upon a bag of alphabet fridge magnets. I loved the colors and they remind me of growing up with those on my fridge waaaaay back when. I loved the idea of making kitsch clothing because it makes a statement. Then I decided upon gluing them to an article of clothing so I searched around the store and found a jacket that was on sale! I realize we should not have purchased new items but they were from a thrift store so…. 🙂

I don’t know how I am going to do the back of the jacket but this is the front!