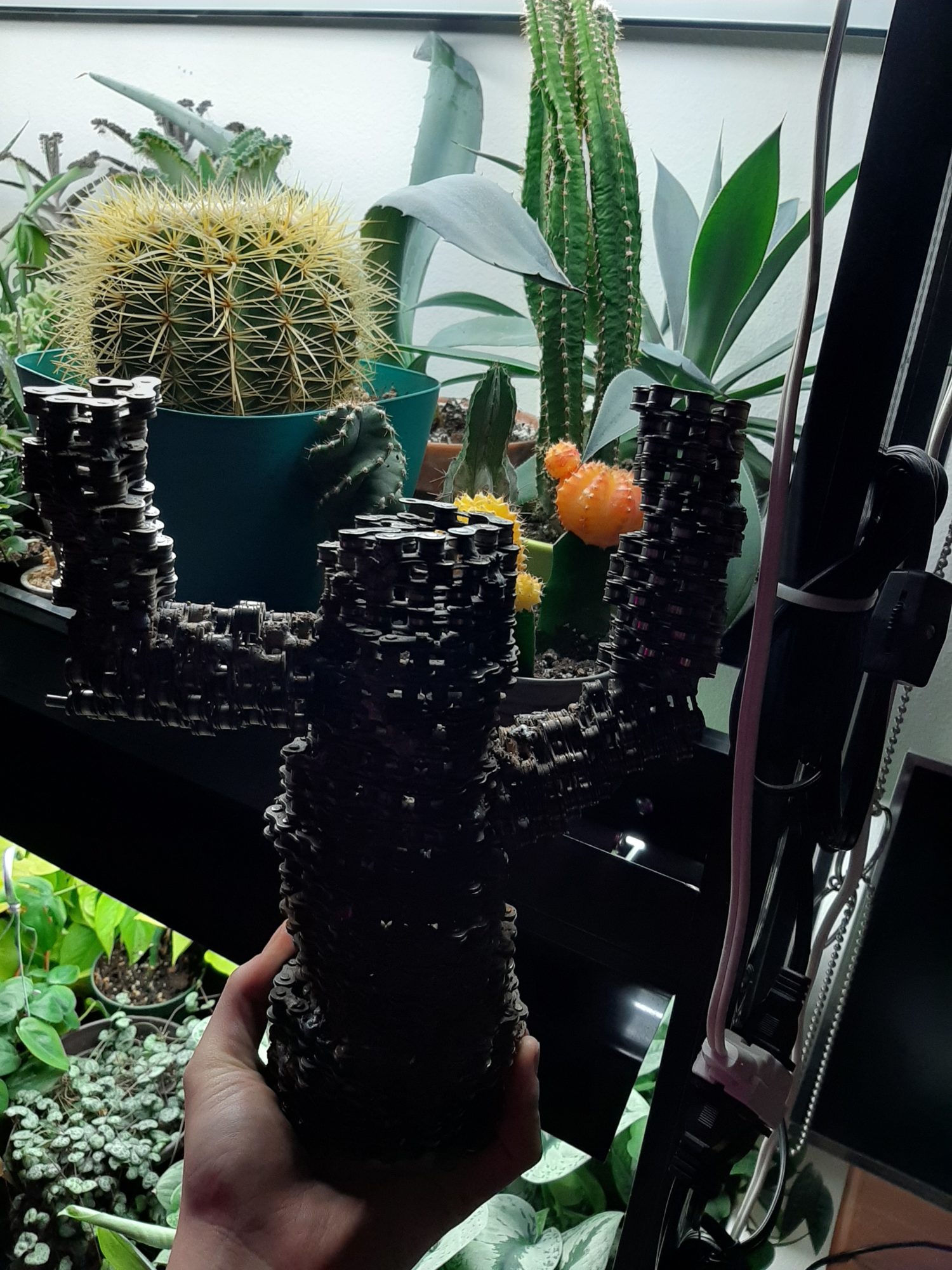 I would like to summarize how this project went with an original haiku:

A bonsai and me,

Was not meant to be, a tree;

So dearest reader, if you cannot tell by my poem we had quite a metamorphosis since my last post and my bonsai has transformed into a saguaro cactus.  In case you forgot how we got to this point, let me refresh you.

🌳 the finished bonsai tree sculpture! The other trees I've made out of bike chain seem so flat now. That third dimension really does bring it to life! Many neglected house plants have died in the pot that serves as the base for this sculpture. Fortunately I'll never need to water this one! The tree is held into the pot by a spoke that goes through the drain holes to a hidden bracket located under the sculpture. I'll do a later post on that, it's a nifty little contraption. I'll probably have this piece listed on my website later on today. Though I may have this one for local pickup only. It may be a bit awkward to ship. Though if you would really like for me to ship this piece, I'm sure I can make arrangements.

prototype of tree base

It is a couple days until this project is due and to be honest I feel slightly flustered by the conclusion of this project. I have now cleaned all of the bike and moto-chain, welded the base and one of the branches. As it happens, it is much harder to weld the bike chain in the multiple inches of snow rather than when I started and welded in beautiful Feburary 70 degree weather. I have gone about welding my project using a flux core welder so that I could complete this in my back yard. I ended up making multiple tack welds in the base ring in order to stiffen a circular shape and then as the tree started to *grow* I ended up tack welding between two layers of chain. Overall this was a decent technique, however as more and more moto-chain was added and subsequently shaped, I ended up breaking multiple tacks which was particularly frustrating. I also ended up changing my technique from trying to hide the welds by welding from inside as this ended up not being time efficient nor did it allow me the precision to place the tacks exactly where I wanted to welding on the outside about seven layers up.

I am thinking that I will sandblast the tree when I have finished the form in order to remove some of the flux core slag. I do have a little bit of apprehension about that that this might destroy the tacks. I may add more tacks to reinforce and then sandblast and then spray paint to cover more of the tack beads. I am not sure about this step however as that may take away from the somewhat industrial aesthetic.

I am struggling to figure out how to finish out the top of the tree. In real life, trees are able to bifurcate smaller and smaller until they end, but I do not have this ability as bike chain circles end up being quantized (sized) circles and each individual link is a defined size. I have also been struggling to make it lean in the direction that I wanted and therefore it does not have as much of a bonsai feel as I would like.  I currently have what I would describe as a log. I don’t think that I will be adding any sort of leaves out of smaller wire so I want to have an appealing shaped tree rather than something that looks like I truncated my tree in order to force growth out of the nodes (which is a real bonsai technique).

I will let you know later what I have figured out soon. Wish me luck!

Whoosh here we are back at today, at the conclusion of this project! Now, you have already seen the thumbnail of Sam the Saguaro so it is not a far reach to comprehend that this project was a total failure. Did I meet any of my initial design goals of having a beautiful seamless bonsai tree that swept ever so elegantly? NO. Did I make something that I like? NO. Did I make something that fits the initial aesthetic of industrial art? Not really. The form has changed from my appropriate attempt at layering (from when this was a tree) to an inappropriately lumpy cactus base. As mentioned above, the size of the diameter of the arms are quantized and therefore look relatively thick. HOWEVER, am I proud of myself for finding a way to pivot from something that I knew was not going to work to something, that while hideous, at least gives me a finished product? Yes. Do I love Sam the Saguaro for his character, absolutely! Will I keep him among my jungle? Maybe for a while.

So, this project ended up working in a very similar manner to my senior project in that both had major redesigns that failed. In the case of the senior design project, the redesigns are considered failures as we did not choose to pursue any of the 24 options we came up with. In the case of Sam, the redesign failed because he is ugly.  I have made a visual depiction of what I mean (see figure below).

Anyway, in case you were wondering about some of the finer details, Sam is about one foot tall and probably about three pounds. He was finished off in Rustoleum spray paint and is sitting in a pot full of leca balls. If I were to do this over again I would cut certain lengths of chain and weld individual rings before stacking as the most annoying part of this process was trying to keep the circular shape of the chain while managing its position in the z direction. I also would never use a flux core again if possible, I wish I was allowed to have made this in the Idea Forge shop with their nice TIG welders, but alas, bike chain is not an engineering material.