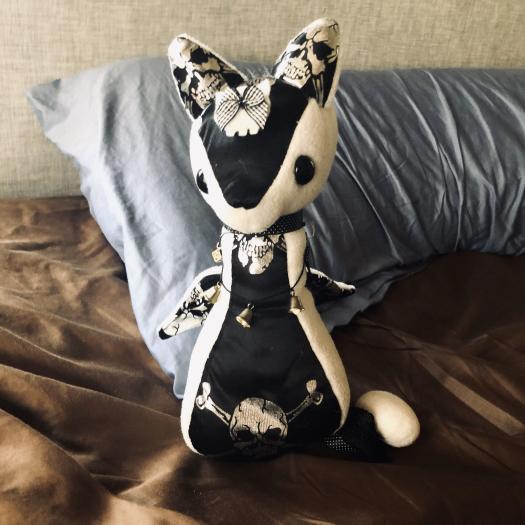 When I first started this project, I wished to make a plush, and my original inspiration began with Hello Kitty [1] and recycling the old fabric that I kept from my youth and from what my sister did not need anymore, mostly because I did not keep much to upcycle other than old clothes that I use to patch my new clothes.

However, as I kept digging through my materials, I found that the majority of my fabrics ended up majority black or grey tones, and I had very little color in general. Hello Kitty is defined by their pop, childish styles, with minimal blacks and more pastel colors. So I went for a more gothic style, similar to the collaboration between Dollskill x Hello Kitty and Skelanimals [2] instead.

I was also inspired by the colorful designs of BeeZeeArt [3] and their plush bats to help flesh out what I was going to make.

This design was mainly based on trying to figure out what I could theoretically with my sewing skills, and go from there. Unlike traditional design projects (which are usually based off the designs of a customer), this was mostly a trial and error and sketching design, sketching out various patterns and trying to figure out how I would design this plushie. I didn’t want to do too many “limbs”, because those were intensive and take time. I ended up designing no limbs at all, and instead just make a giant body.

Once I figured out what my design was going to be, I decided to begin sewing.

First, some patterns were cut out onto paper and the fastened to the plastic grating to create the patterns in which to cut fabric out.

After the patterns were cut, the pattern was sewn together by hand. Unfortunately, I did not have the foresight to actually photograph my fabrication process, which is a mistake, and something I will always document for later projects.

As this project did not require much fabrication other than sewing, the fabrication process was very simple.

Functionally, the plush functioned exactly as I wanted it to. It was soft, and I had plenty of fabric to create interesting designs on its stomach. It was soft and playful, and did not fall apart after triple stitching.

Artistically, the plush came out a little strange, but nothing that I didn’t like. I wished for the “wings” to be bigger, but unfortunately it compromised wing stability; therefore tiny little wings were left on its back like flippers. The ears were a little flat, so I ended up overstuffing them to give the plush a more rounded shape.
I also really enjoy the pear-shaped design of the plush, as I am not skilled with forming limbs (as seen with the wings), but it gave the plush an almost rotund soft figure to contrast its rather macabre design choices of skulls and broken jewelry. Elegant, cute, but a little edgy at times, and I ended up enjoying this final product.

The name Aery was given to invoke a sense of “air” and lightness to the plush.

I attempted to create a bat companion to this plush, unfortunately it ended up not working out as I pleased, and therefore was scrapped due to the small details. In the future, I would like to be able to experiment with more designs and shapes, and perhaps different, contrasting aesthetics.