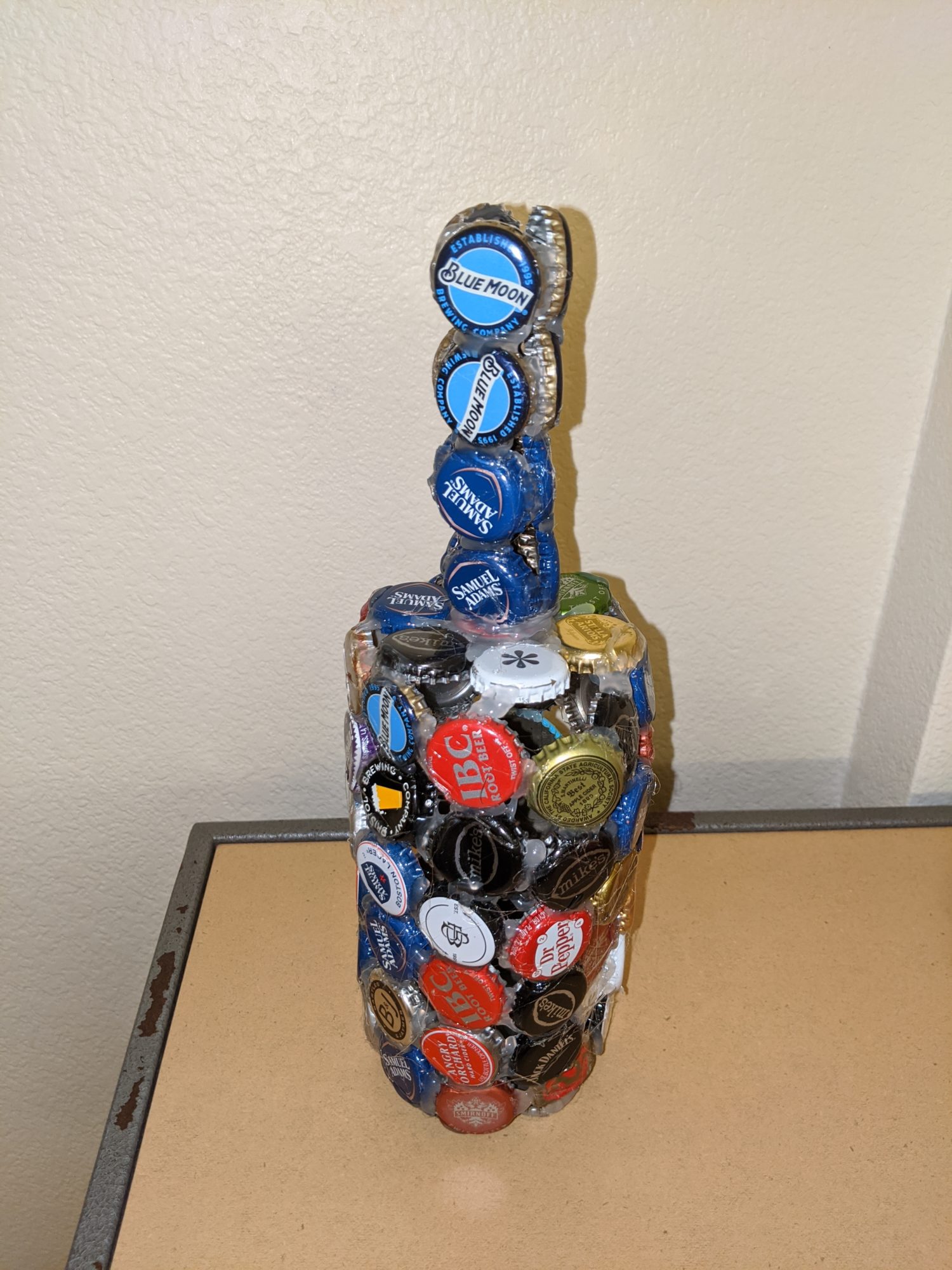 When I started this project, I didn’t have a clear idea of what exactly I wanted to accomplish. I knew that I would be using bottle caps, but that didn’t give me any discernable direction or guidelines for moving forward. It took quite a bit of searching, and discussing, to finally come up with a project that I was excited to take on. That idea was to create a bottle out of the bottle caps. This idea came from a discussion I had with Ben Chang. With this in mind, I was able to come up with a vision for what I would like to accomplish. The biggest part of my vision was that I wanted the final product to, more or less, resemble a bottle. It might not look exactly like one, due to the size/shape of the bottle caps and my own artistic shortcomings, but for the most part I wanted people to think “Yeah, that’s a bottle” when they saw it.

Luckily, my project only required two materials: bottle caps and hot glue. The other materials listed below were more for support of the project. I include “good music” and “lots of patience” because they really did make a difference in my fabrication process. This project was completed in one sitting, which took roughly two hours. It takes a lot of patience to sit for two hours and glue almost 100 bottle caps together. And it doesn’t hurt to have some background noise of your choice to help keep your spirits up when you’re getting tired.

At the beginning of my design process, I thought very seriously about the size and shape of the bottle I would be making. Since there are numerous types of bottles that could be emulated, it was important to try and narrow down my choices to give my design the necessary focus. I decided on using a beer bottle to get the first set of dimensions that would guide my fabrication.

My next step was to actually begin fabricating. I had three main sections that I would be completing: the base, the body, and the neck of the bottle. The base was relatively simple to create. Using seven bottle caps in a roughly circular shape, I was able to create the foundation for the rest of the bottle. I realized quickly that the bottle caps would need to be glued on both sides in order to maintain the structural integrity that I wanted. Otherwise, they would have easily come apart when not sitting flat against the table.

As I started the body of the bottle, I realized how much more difficult fabrication was about to become. Gluing on a flat surface was one thing, gluing something into place vertically took a lot more precision and tact. I had to make six rows of about ten bottle caps, each resting on the layer below it. I built one row at a time. I glued the bottle caps in place from the inside of the bottle, then reinforced it on the outside of the bottle once it was more securely held in place.

The last section to be fabricated was the neck of the bottle. This was supposed to include the curvature that usually connects the two straight vertical sections. However, I was unable to place the bottle caps securely enough to allow the desired curvature while also supporting the neck. After a number of attempts, I decided to cut my losses and make a flat top to build the neck up from. To do this, I created a second base shape, made of seven bottle caps, and glued that in place. From there, the neck, which was made of four layers of three bottle caps, was glued in the center. I ended up making the neck as a separate piece that was later attached to the structure. I did this because I found it nearly impossible to glue three bottle caps together without a lot of manipulation. If I had built up from the top of the bottle from the start, I don’t think it would have turned out as good as it did.

Below is the final product that I was able to create. I used almost 100 bottle caps (No I did not keep count, and I am not going to go back and count after the fact), and almost a dozen hot glue sticks, to make this possible. In the end, I’m happy with my final product. Is it perfect? No. But what fun would it be if it was perfect after the first attempt. The important thing is that I was able to do. I went from no idea, to some idea, to something I can hold in my hands and say “look at what I made!”. Which I think is pretty cool.

I didn’t have any functional goals for this project. I intended from the beginning for it to be purely artistic in it’s creation. So in that respect, I accomplished my goal.

My artistic goals were accomplished, for the most part. Of course, there is always room for improvement and iteration, but I think that I was able to create a product that, more or less, resembled a bottle.

Although I am proud of the work that I was able to accomplish with this project, there are still some things that I would like to improve upon. Whether this means making a new bottle from scratch, or disassembling the current bottle and making improvement, it would be nice to be able to fulfill 100% of my vision. Or as some students in class have suggested, just keep making more of these until I have an entire collection.