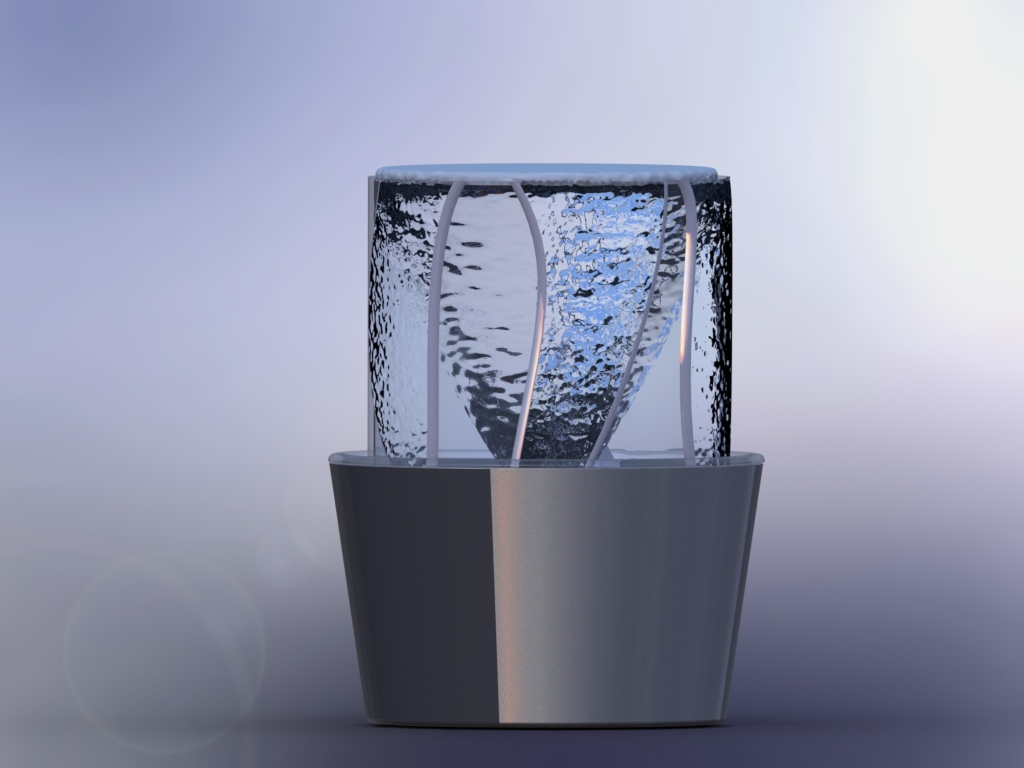 As the COVID-19 pandemic unfolded, I decided to re-scope my project. Instead of manufacturing anything, I am using this time to really focus on the design and create renderings and an animation of the device. I have also pivoted my idea. Previously, I was going to build a water clock: water would drip over a sensor, and from this sensor reading, a digital clock would be ticked and displayed on the device’s LCD screen. Because of the campus closures and not having manufacturing resources available, it would not have been reasonable or possible to get everything manufactured within my budget and timeline. As my design of the water clock was also limited by the manufacturing processes and materials I had available, I was limited in exactly what I could accomplish. Meaning, it was more challenging to achieve my target minimalist/Apple aesthetic. Apple uses a lot brushed aluminum, curvy and organic shapes, and typically black accents. This would have resulted in a project cost that was above my budget and would have been difficult to achieve before the end of the semester.

Figure 1: Target aesthetic: if my device can fit in with the rest of the devices in this image, it will be a success

So, I have decided to pivot towards a desktop vortex waterfall. Instead of manufacturing anything, I will be creating CAD renderings and an animation of how the device will work. I was inspired by the video below in which someone makes one of these waterfalls from up-cycled materials. I will still be targeting the same aesthetic as pictured in Figure 1.

Below are some of the renderings I have come up with. The idea here is that a pump similar to the one I proposed earlier in the semester will be used to pump the water up from a bowl-shaped reservoir and send it in a spiral pattern. As the cylinder fills up with spiraling water, it will begin to spill over the top of the cylinder and return to the reservoir to be pumped into the cylinder again. I have added an LED strip and an Arduino Mini to control the LEDs. As the light refracts through the water and cylinder, it can offer an interesting glow and an eye-catching aesthetic. Because my device is no longer square-shape, it was difficult to incorporate an LCD screen. As I played with a couple ideas of how to incorporate a sensor and LCD screen for the clock, it began to take away from the aesthetic. So, I went back to look at Apple products and returned to the roots of this aesthetic: simplicity. Without the additional components, the design remains more sleek and simplifies what types of electronics are needed. I also concluded that the clock portion of this device does not add much to it. There are three main components in this assembly: the cylinder, the water pan (reservoir), and the base. I used Apple’s HomePod device as my design inspiration and is pictured below.

CAD Rendering of my Desktop Vortex Waterfall with No LEDs

The device will be desktop-size and stands about 8.5 inches tall and 5.5 inches in diameter. It consists of a transparent acrylic cylinder and is designed to be cast. Other possibilities are blown glass or polycarbonate. I decided to go with acrylic to reduce the cost of the device. However, the bottom of the cylinder does have some organic curvature, so it is possible this may need to be redesigned, or designed so it can be made out of blown glass. The cylinder is responsible for containing the water vortex. On the bottom of the cylinder are four feet that stand the cylinder off the pan to allow water to run underneath the cylinder and get to the pump.

The pan contains the pump and the water. It fits flush with the base of the device. I have designed it to be made out of ABS, and could be injection molded or machined. The pan is transparent (or mostly transparent, difficult to achieve with injection molding) to allow for the LED lights to shine through. The wall thickness of the pan is all uniform which allows uniform cooling during the injection molded process; it also has a more than acceptable draft angle.

The base of the device holds everything in place. It is made from aluminum and I have designed it to be cast. The base will then need to be post machined to achieve the necessary tolerances, and will be brushed to match the aluminum used in Apple products. This also has uniform wall thickness to help with the casting process and has a sufficient draft angle. On the bottom of the base, a circular ridge has been included that can accommodate a rubber footing to help keep the device from sliding around on the desk.

The remaining components consist of the pump, tubing to route the water into the cylinder, an LED strip, and an Arduino Mini. As of now, there is not a great use for the Arduino other than controlling the LEDs. I will be looking further into finding standalone LED strips that contain the necessary electronics to control the color and LEDs independently from the rest of the device. The base contains a cable grommet through which the power cable is routed. Two power cables may be needed depending on which LED strip is used: one for the LEDs and one for the pump. Refer to the exploded view below for the orientation of the parts.

I will be continuing with polishing the design, rendering the CAD models, and developing the animation. Please let me know your thoughts. I also welcome any suggestions or critiques.