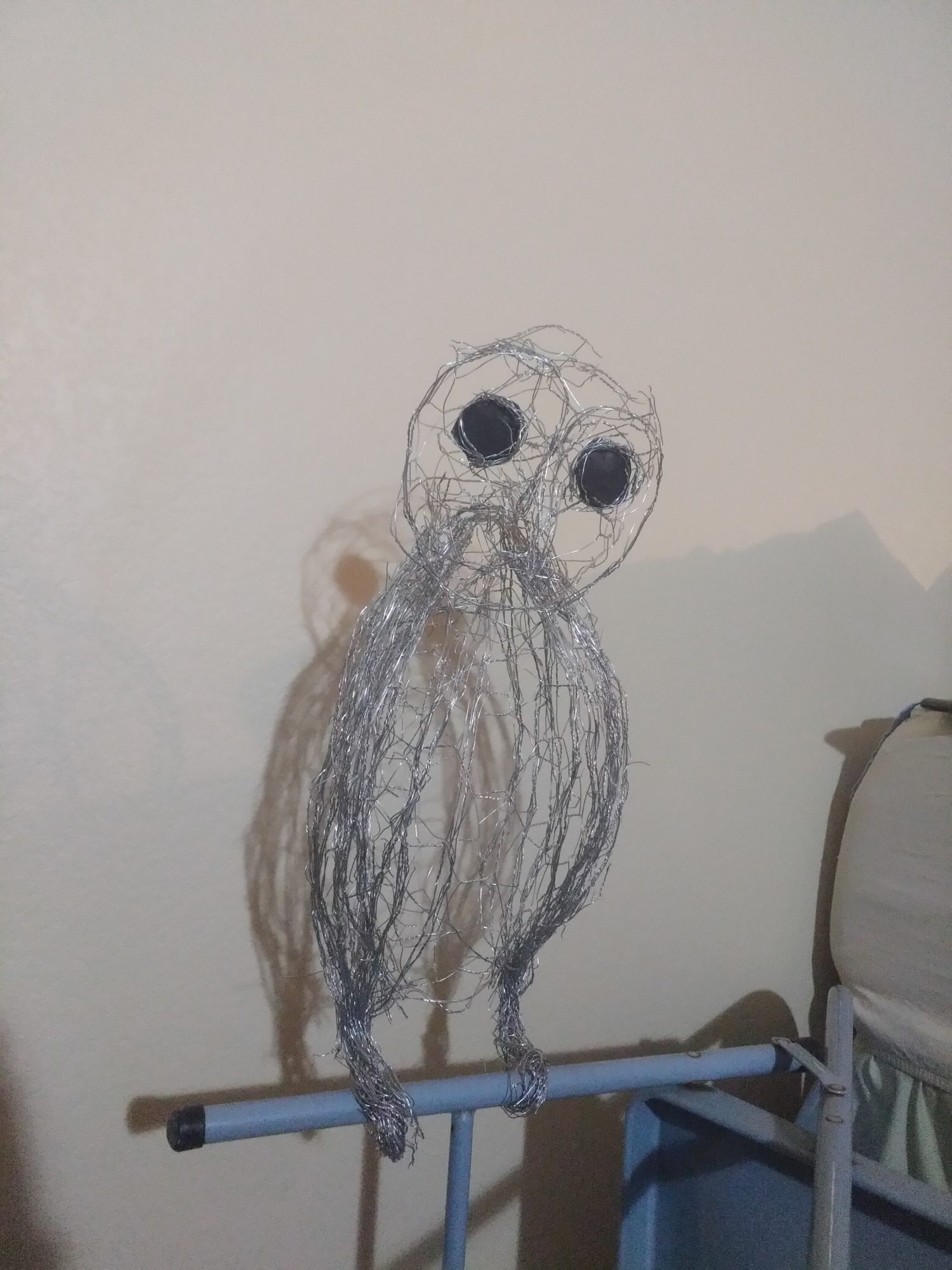 My timeline for this project was similar to as initially planned but varied due to circumstances involving the Covid-19 quarantine – my adjusted timeline is pictured below:

Due to the displacement from campus, I lost about a week of time to work on the prototyping of the initial sculpture designs initially, which pushed my schedule as well as escalated problems later in the project. This meant that errors that occurred later in the project would not have the proper period of time to mitigate said issues.

The process for fabrication was fairly straightforward – I began with a frame constructed out of the chicken wire in the general desired shape, as pictured:

Then, strands of chicken wire were woven into the frame to form the outer ‘shell’ of the sculpture, while simultaneously adding mass to the sculpture. This was done until I inevitably ran out of material – leaving the front and back of the sculpture more open. This wouldn’t have been too much of an issue if it possible for me at the time to acquire more material. Unfortunately, with the pandemic, I had to make do with the material I had, The strands of chicken were cut from sheets of the larger roll of chicken wire and then formed by hand into longer strips.

For the dynamic component, I had planned for a simple arduino circuit controlling a servo to sit within the owl, which rotates the head back and forth. I had the system partially built when I ran into electronic component issues; the board had broken in between the time I was displaced from Boulder and my current location. I had ordered a new board as soon as I could, but at the time of the final presentations, I had yet to receive the new board. Unfortunately, this means that I would be lacking a dynamic portion of the sculpture entirely. Below are pictures of the initial design:

However, even with problems with the electronics, I completed the sculpture (just minus the electrical components), pictured below:

In the end, I am relatively pleased with the final sculpture. The final form and structure is similar to what I was envisioning, and the aesthetic fits the contemporary and surreal aesthetic I was aiming for. However, In general, there were a few major issues throughout the period of the project – including time issues, electronics issues, and an eventual lack of materials. All of these caused a cascading effect of negative effects on the final sculpture, and I wish I could have completed the sculpture in a scenario where these issues hadn’t occurred. In terms of things I wished I would have done differently: in the future, I would definitely choose a different material to sculpt out of. The chicken wire was a massive hassle to work with, and extremely unwieldy and painful (with the way I was cutting the strands). There are also definitely a few major improvements that could be made to the aesthetic of the sculpture, especially with the general ‘mass’ of the owl.