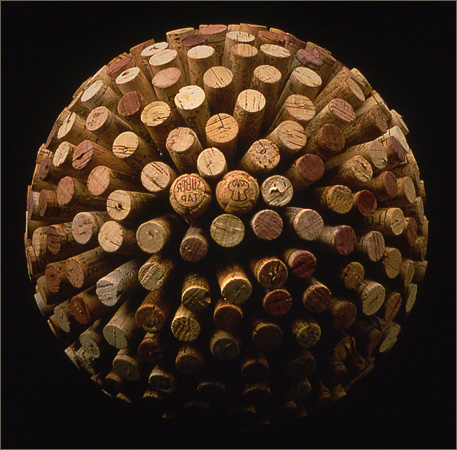 Within the past week, I have settled on an idea for the Upcycle Project: a used wine cork lighting fixture. This idea originated from several ornamental cork balls I found online, as shown below the images below. I like the spherical organic shape with the different coloured stained wine corks. The addition of a light bulb is my own idea. The idea of a cork disco ball incorporated the shape and material I wanted, while simultaneously including an electrical and functional component. My idea is illustrated in the figure titled “Sketch: Cork Disco Ball”.

To create the lighting fixture, I need a transparent structure to house to the light bulb and to glue the corks to. For example, a glass fish bowl or plastic plant terrarium. The corks will create interesting shadows around the room. To seal the opening in the bowl, I will make a mesh grid of wire, allowing the cord of the light bulb to pass through.

One major issue for this project is sourcing material. Corks are discarded in restaurants all the time, but rarely do they collect them before trashing them. So far, I have called the following restaurants about collecting corks from them, but many say it is too much of a hassle to collect them for me. There are several sites that sell used corks, but I would prefer to collect them on my own.

All in all, I expect my design loop to look something similar to the following diagram. The ideation and concept generation phases have been the most time consuming so far. I look forward to the manufacturing part of the design process.