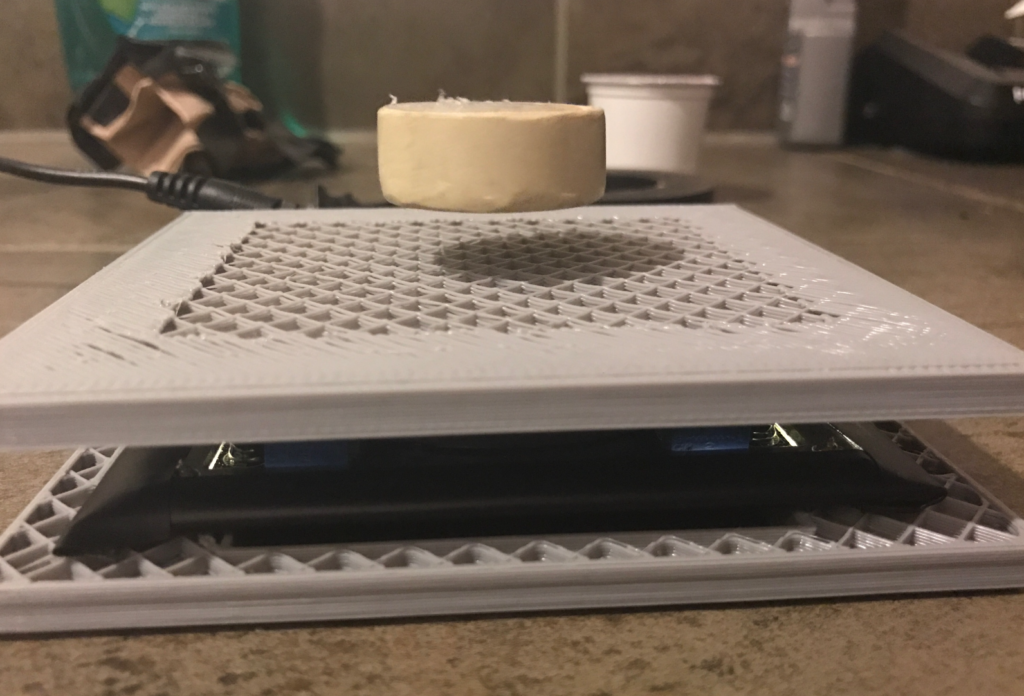 For my final project, I made a levitation stand using magnets. The idea came from a bar in a small town in Idaho that a passed through on the way back from a camping and fishing trip at Hell’s Canyon last summer. I saw a beer bottle floating in space and spinning slowly similar to the one shown below.

This really drew me in to what was going on, probably at least somewhat due to being a few drinks in. This is actually one of the things that has stuck with me the most from that trip.

The first step for me in this project was to research how these things work, to see if it was even a feasible undertaking. I got the idea of spinning a disk magnet really fast in order to generate a stable magnetic field that another magnet could be placed onto without falling over. This proved to be difficult, as arduino motors were not suitable for the task during initial prototyping. Once it became clear that I was not going to be able to spin a magnet fast enough to achieve the goal, I researched other methods. After about 8 hours of researching everything from DIY kits to experimental physics forums, I thought I had a means to build the project. What I came up with was a series of electromagnets nested inside a ring magnet. A simplified diagram of how this works is shown below.

This sketch shows the basic idea of how this thing actually works. The ring magnet supplies the stability for the magnet that is suspended as it is unable to climb the magnetic field from the ring magnet. The electromagnets provide the “lift”. This is something that was hard to actually incorporate as the electromagnets need to be perfectly balanced with each other as well as strong enough support the weight of the floating magnet, but no so strong as to push the floating magnet over the magnetic field of the ring magnet. This challenge was overcome by using  potentiometers and trial and error to see how much power to give the electromagnets. A picture of the bare bones prototype is shown below.

This picture shows the magnet being suspended with no visual supports. I’ve gotten the stand the support up to 3 pounds, which may sound small, but it was pretty incredible to see it float.

As far as design aesthetics go, I initially wanted to design something with Art Deco in mind. This proved to be difficult when designing the enclosure. The distance between the bottom of the floating magnet and the top of the ring magnet is less than an inch, so the top of this stand needs to be flat. For this reason, I scrapped the idea of Art Deco and decided to go for a futuristic aesthetic based on the comments from my presentation. The physical stand is actually printing right now, but the CAD for this stand is shown below.

The circuit board will sit on top of the platform in the middle of the ellipse and a small cover will be placed over top of it to hid it and protect the magnets from damage.