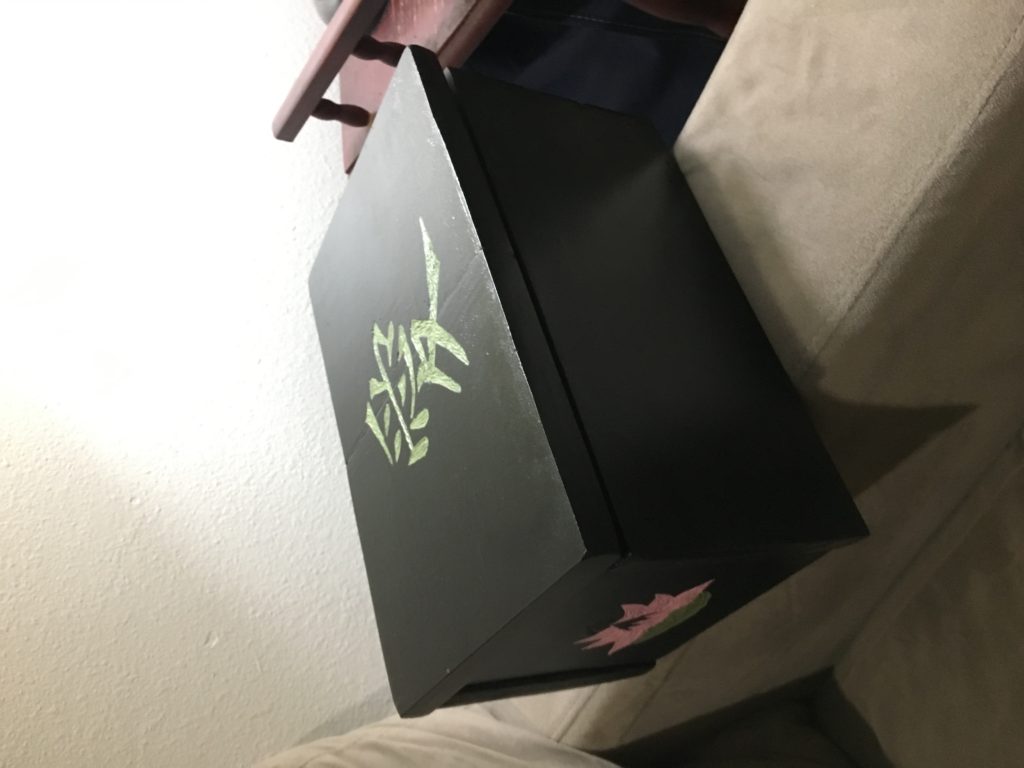 For my final project, I chose to design and fabricate a Japanese style jewelry box. I began with the idea of creating a mechanical puzzle. I did research on some common puzzle solutions, but most of the puzzles that I found and considered to be interesting involved fabrication methods that were too far out of my skill set to design, organize and complete in the time frame that I allowed for fabrication. I also knew that the aesthetics of the project would be considered more important than the functionality and that creating an aesthetically pleasing mechanical puzzle is a daunting process. I therefore decided to draw inspiration from other passions. Over the past couple of years, I have become enamored with the different aspects of Japanese culture and art. The most influential elements of this category were video game graphic design and furniture designs. I have always enjoyed the simplicity and elegance of Japanese style furniture. Some examples of this style that I drew inspiration from are shown below.

The hero spray depicted and the character himself helped me determine what sort of color scheme I wanted to use — his wardrobe and sprays include greens and blacks with a lot of Japanese influence, being that “Genji” is from Japan.

The examples of furniture and the jewelry box above influenced my choice of base color and structural aesthetic. I knew that I wanted to create something blocky but clean with a dark wooden base. I also took notice of the detailed designs on the jewelry box and the organic theme that appeared on many examples of Japanese jewelry boxes. I have never really explored art as a talent or as a profession, but I found myself drawn to attempting to create some simple organic designs.

To begin I created a prototype using bass wood, acrylic paint, and wood glue. I obtained a small, thin slab of bass wood from McGuckin Hardware and measured it into six sections. I then used black acrylic paint to create an aesthetic base for each side. I began experimenting with wood carving because I had access to the tools and believed that it would add to the organic nature of my design. I created some very simple designs while freely carving the wood and then filled them  in with green, brown, and pink acrylic paint to give the box some dimension. I finally cut all six sides using a box cutter — the wood was that soft — and glued them loosely together with wood glue. While the prototype wasn’t functional, it aided me tremendously in the creation of my final design.

In the pursuit of creating my final design, I first went to home depot to get a thicker piece of wood that wouldn’t be so large that there would be waste. I was unable to obtain such a soft wood of the dimensions I intended to use, so I chose the softest one that I could — pine. I measured out the dimensions of each size side that I needed and cut them using a handsaw. For the top cover of the box, I realized that I had created side pieces that were a bit too wide for just one cut from the slab to fit over the top, so I fused two precisely cut pieces together using wood glue. The assembly layout of the pieces and fused top are shown below.

I then power sanded each piece individually on all sides and the glue joint of the box lid to get a smooth finish. Once the surfaces were smooth, I used the same matte black acrylic paint as I used for the prototype to paint the base color of the box. I painted all sides of each piece of the box.

I toyed with the idea of using all four designs (for four sides) that I used on my prototype, but instead decided that it would look too busy and I wanted a simpler, more elegant design. I therefore decided to carve on the small sides and the top of the box only. A depiction of the progression of one of these designs is shown below.

After this step, I used some dotwork with green paint to create a leaf-like effect as well. The other two designs I chose were the lotus flower and the Japanese character for love. I repeated the same process for these designs of carving and filling in.

The assembly of the box began with the use of wood glue. I knew that I was happy with the structural integrity of the prototype using only wood glue, so I knew that it would be strong. However I figured that since the final product would be heavier than the prototype, I would reinforce the side connections with small nails or brads. The last step was to drill pilot holes and attach hinges in the appropriate places on the box — one hinge was necessary for the lid while another was necessary for the false bottom that I chose to include from my mechanical puzzle inspirations. I attached a very small hook to the top of the false bottom and painted it to blend in so that the user would be able to lift the false bottom with relative ease — I wanted it to be a little bit difficult to open this part of the box. For a while I tried to decide if I wanted to maintain the matte look of the box or if I wanted to apply lacquer. In the end, I tested some lacquer on a test piece and determined that I liked the look and feel of the wood more. Suddenly the project looked finished and elegant.

I remained well within my budget of under $100 because I was able to reuse the paint that I used for the prototype and had access to most of the tools I needed already. I also was very conservative about my use of the wood — I didn’t want anything to go to waste.

I would like to give special acknowledgements to Levi Caffes and Luke Wooley for listening to my design ideas and contributing suggestions. I would also like to thank my father for allowing me to use his tools to assemble the box and attach the hardware, while he also contributed to the assembly.