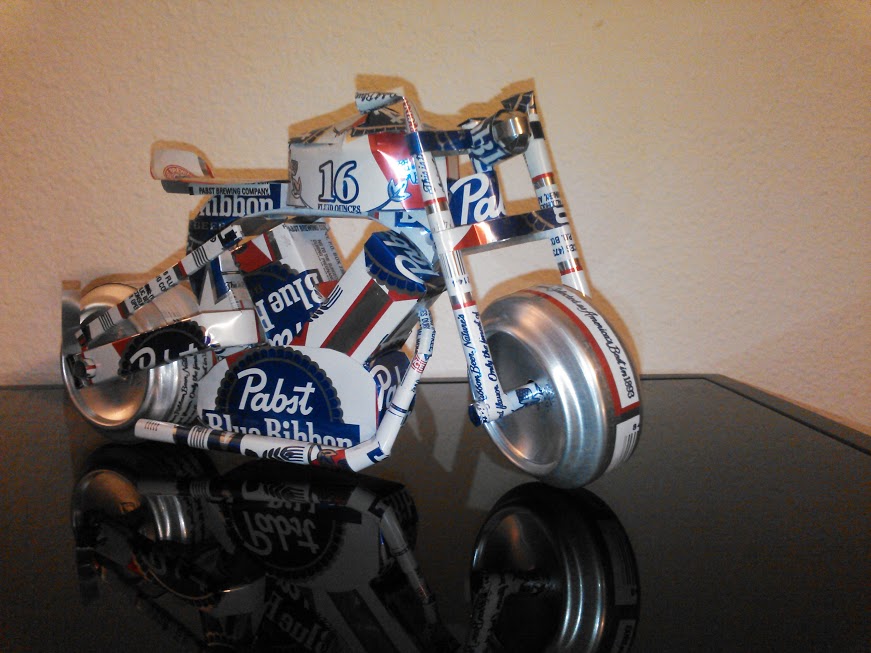 Sketch based upon can wheel side and photo

Here it is the #16 PBR racer, complete with rolling wheels, rear suspension, and movable steering. The motorcycle is designed as a cafe racer with large v-twin engine, short clip on handlebars, and exposed frame (see image below). Every piece was made from 16 oz. Pabst Blue Ribbon cans and superglue, with the exception of the frame, which required a bit of super structure provided by cardboard layers from the case.

The design process for this project involved far more iteration than I initially anticipated, the material was less than cooperative when trying to build some of the complex shapes/ bends needed thus many part re-designs were needed. As the team graphic was quite linear this design definitely diverged from that plan and required many failed prototypes before the final pieces were built. In creating a new graphic representation of the design process there would be far more interconnections and loops as well as dead ends leading to re-designs. After completing this project I believe a second model would have a much more linear design process as more time would be spent in the initial design phase as the material is better understood.

This design started with the image above, a custom built Yamaha Virago xv920 by 485Designs (Denver) which to me is the epitome of cafe racer motorcycles. That image combined with the memory of tin can models I had seen as a boy in hobby shops (see earlier blog post) led to the want to pursue this project.

From the picture I sketched a stripped down drawing (see below) based on the can end size which allowed me to identify major components that needed to be assembled into a final product. The list of components in order of creation: motor/trans, exhaust, frame, wheels, front triple tree, rear end, tank, headlight, and lastly the seat.

As I began building the engine I quickly realized the material was going to resist any complex curves meaning each piece would have to be built as if it were paper. Discovering this I began modeling parts from paper then tracing the parts to the aluminum skin which saved a ton of time and material. Using paper allowed for a sort of rapid prototyping that was especially helpful when building the frame.

Many of the prototypes failed causing dead ends, take the frame for example, as a main structural component it needed to be rigid and straight, however each time I assembled the curved pieces warping would occur, thus despite my want to build the model from aluminum and glue alone, I decided to use a cardboard super structure.

Using the above template I created a cardboard superstructure which was wrapped in an aluminum skin giving a solid mounting surface for the other components.

I had originally planned for the model to mimic the sketch as closely as possible and have working working front and rear suspension, steering, and rolling wheels. At one point I had considered adding led’s for lights and a drive mechanism to propel the model, however due to time constraints and the want to mimic other can models I had seen it seemed more appropriate to build a well built attractive model rather than a toy.

The final product ended up being a bit larger than the original sketch and more resembles an earlier style cafe racer with dual rear suspension arms rather than the single pivot design of the sketch.  The design for the front suspension continuously failed and to avoid adding more non-can parts (internal springs) was swapped for a ridged setup. I would have liked to add more detail to the engine/trans as well as to the wheels (spokes or cutouts) and found a way to work out the front suspension.

Artistically I think the model is a success, it conveys the ideas/imagery I was going for, and conveys my love of blue collar mechanics and beer. However the finish is a little rougher than I would have liked, superglue tends to travel unnoticed until it’s too late leaving fingerprints on exterior surfaces, as well binds so quickly adjustment is impossible leading to crooked/kinked components. In future attempts I would trade the glue for welds, and add details using wire, paint, and plastics to create a more realistic model.

I know a great bar that would proudly display this model (ZZ) and do intend to build a far superior PBR racer in the future.