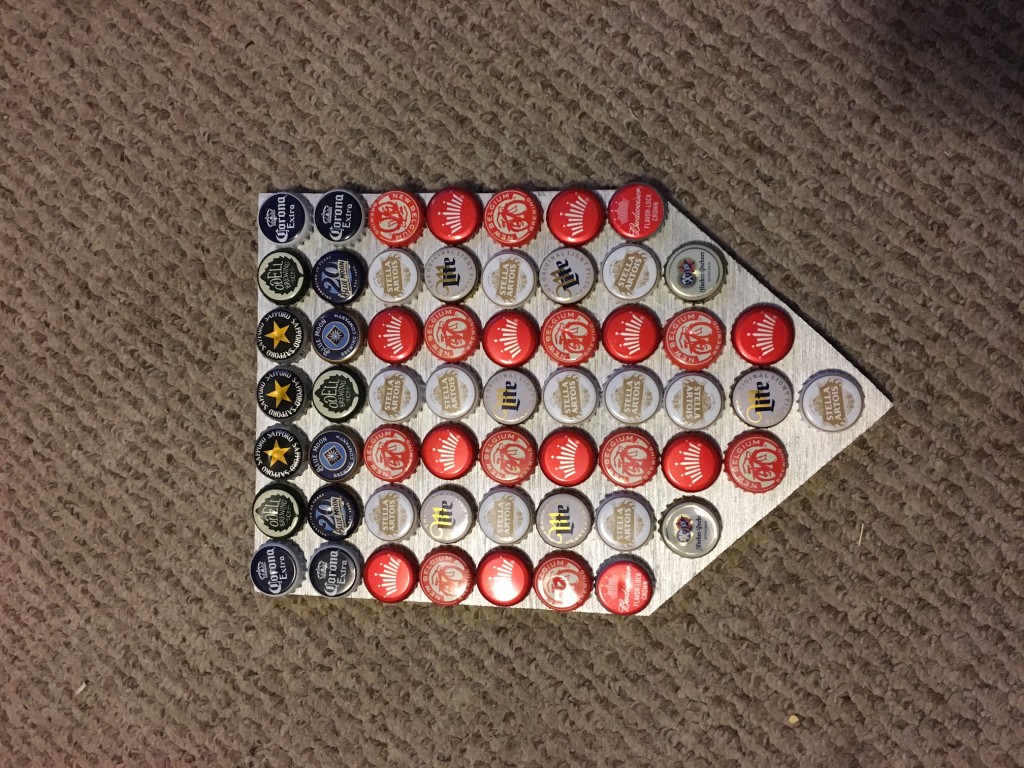 When I sat down to think about what I wanted to do for this upcycling project, I wanted something that could last, something that I would like to keep around.  I ended up using a blend of two things I like very much: beer and the United States of America.  I decided to use old bottle caps of mine to make an American themed mural of sorts.

At first I thought I would like to make an American flag out of my bottle caps, using the diameter of a bottle cap as the height of each stripe and then scaling accordingly using a 3×5 ratio.  This, however, would have taken over 200 bottle caps, and I didn’t have enough, so I started thinking about how I could scale things down.  The flag was out the window, but I knew I wanted to keep the American, red white and blue aesthetic, some examples of which can be seen below.

After a lot of thought, I realized that I could use designs form US sports teams that I have loved watching over the years.  I went on google to refresh my memory, specifically searching for the following two designs:

These are the crests of the US Men’s National Soccer and Hockey teams respectively.  Since I would be using plywood to back my mural, I decided to lean more towards the soccer crest.

The first step was to get the right bottle caps.  We have a bottle opener mounted on our wall which is behind a bar and in a corner, which means the bottle caps are seldom picked up.  I went through our stash and found a lot of red, white, and blue and started organizing them to see how I would place them.  At first I thought I would do 5 stripes, but realized that was too small and quickly changed to seven.  In following the USMNT (soccer) crest, I knew I needed a line of blue across the top and settled on a depth of two bottle caps, with the stripes being proportionally five bottle caps deep on the ends, descending down to eight in the middle.  This was mostly done by placing the bottle caps on my plywood and seeing how it looked.

After I had the bottle caps placed, I used a strait edge and traced the design on the plywood, which I had left over from a previous wood-working project.

I then cut out the outline of the crest using a power saw.

Next I figured out exactly how I wanted the bottle caps to align, and in what pattern, and used hot glue to adhere them to the wood.  This was actually pretty tricky, as at first I tried putting the glue on the crown of the bottle cap.  This ended up being messy and innefective, and soon I was placing each bottle cap, tracing it with a pencil, gluing a round my pencil marks, and then placing the bottle cap.  The result was as follows:

I didn’t like the wood color poking through after I was finished, so I ended up prying all the bottle caps off and starting over.

The hot glue (now cold and hardened) was not a problem to get off the bottle caps, but it wouldn’t come off the wood, so I had to cut a new piece, this one more symmetrical and better looking than the first.

I decided I would spray paint the background silver this time.

After the spray paint, I let it dry and then put the bottle caps back on, this time in a slightly different configuration.

(I don’t know why it’s coming out sideways).

My design process started out being very linear, until I decided I didn’t like the wood look, and didn’t think it went with the aesthetic.  At this point the process essentially started over, except I already had the design and the bottle caps (total of 58 bottle caps used).

Like I said before, my inspiration was this great country we live in, with the added bonus of using beer caps to do it.  I have always liked the “American” aesthetic, filled with red, white, and blue, and complete with the stars and stripes.

In the end I am very happy with how it turned out.  I’m very glad I decided to start new and get the background painted silver, I think it really completes the aesthetic.  If I had more bottle caps, or accumulate enough over the next few years, I would like to make an American flag as originally intended.