I started CU’s Super Smash Brothers club during 2013’s spring semester.  It’s pretty well known that Super Smash Brothers players are notoriously picky about the input lag on monitors.  Three of the consoles most commonly used (the Nintendo Gamecube, Nintendo Wii, and Nintendo 64) all output video via VGA standard definition cables.  When playing on an HDTV, a process known as upscaling occurs where the tv must convert the video information to appropriately match the tv’s native resolution.  This process usually takes a few fractions of a second to occur, which by Smash standards is an eternity.

To avoid noticeable input lag, most Smash players play on old CRT tv’s.   These tv’s offer minimal input lag, and narrow variation from tv to tv.  To help bolster attendance at CU’s Super Smash Brothers club, I started buying CRT’s and hauling them to campus every week.  At my peek I had 11 CRT’s that I brought to campus every Thursday night.  So, when this upcycle project came around the first thing I thought about was how to use up one of the tv’s i still have (I still have three at home).

To be honest, I really want a television aquarium, but can’t quite get myself to commit to taking care of some fish for the foreseeable future.  So instead, I decided to build a tv terrarium – plants I can manage.  I googled “Television Terrarium” and stumbled across enough cool looking projects to decide to move forward with the project.

While I liked a lot of the terrariums that I saw online, I felt like there was still some stylistic freedom to be had with the idea.  There’s a pretty well-defined aesthetic associated with 90’s-00’s tech.  A lot of the circuits in electronics built during this time are printed on huge green and beige boards, and have huge resistors, capacitors, transistors, mosfets and such neatly labeled and organized into specific zones.  Taking apart the tv (it was one of those really cool tv/vhs combo units) I thought it would be cool to incorporate some of this aesthetic into my project.  I thought the strict geometry of the circuit components/boards would contrast nicely with the curves of plants inside.  I wanted the final project to look like a prop from one of the new Jon Rafman/Daniel Lopatin videos (google “Sticky Drama” if you’re interested).

It was pretty important to me from the get-go that the final product be clean, sustainable, and maintainable.  I wanted to incorporate some lights to create a piece which will add some ambience to our living room, but I knew that if I wanted to keep terrarium indoors, it has to keep the surrounding area clean.  I don’t want any dirt or water leaking out.  I also wanted to create an environment which will sustain some plant life.  Finally, it has to be convenient to care for the plants.

Functionally, I feel like achieved all of these goals.  To make sure that no dirt/water would leak out, I lined the inside chassis of the tv with foil. Initially, I was a little worried about the possibility of the foil tearing, but the majority of it lies flush to the chassis and is packed from one side by dirt.  I also made sure that the final soil level was well below the screen opening.  To ensure that all of the flora inside don’t die in the next few weeks, I specifically picked out some low-light plants with small space requirements.  While I’m hoping they grow to fill up the interior a little more than they do now, they should be able to maintain some health given the unique environment.  The plants really only need to be watered, so I decided to leave the front of the tv open so that I can reach in and pour some water inside (a cup works just fine).

Artistically, the piece still feels like its lacking.  I think when the plants fill out a bit more, it’ll pull the project together a bit more, but it still feels like something is missing.  My roommate had the idea of adding some worn down army-men figures (maybe melted?) to create a post-apocalyptic battle scene inside.  I think its a pretty good idea, but haven’t been able to find any army men off the shelf, so I might order some to try and fill the space inside.  I’d like to somehow incorporate some more of the circuit elements inside.  I think that adding some of the wires that I cut out of the assembly to the inside might add some flavor, but I haven’t been able to figure out anything satisfactory.

Since I’ve really only worked through one iteration, I’d like to take a shot at making a more polished, aquatic version.  I’ve since learned about “aquascapes” which are these bonsai-esque aquatic plant habitats (bonus: no fish).  I really dig the minimal design of a lot of these spaces, and think it would look really cool in an appropriate tv.  If I can find a tv that I think I can refurbish enough, I plan on trying to build one of these this semester/summer.

Some aquascapes for reference:

My design process for this project was pretty scattered.  I really wanted to get my hand on the project and get it built so that I could figure out how all of the pieces might fit together.  This being said, I haven’t made any huge revisions. 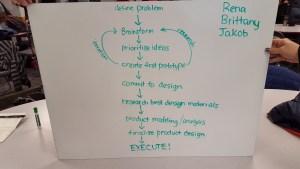 I’d really like to re-paint the tv, figure out how to incorporate more circuit elements, and find a better way of dissipating the light from the top of the tv (right no the lights are just hot glued to the ceiling).  Whenever I encountered an issue, I ran with the most convenient fix available to me at the time.  Our group’s design plan was pretty linear.  I’d say that my process had a lot more starting points which all converged into a final product.  What to put into the tv, how the tv should be decorated, how to light the tv, which plants might look best vs which might survive best, were all small projects in and of themselves.  Seeing the bigger picture now, I think I could refine each of these components to develop a much sleeker product.