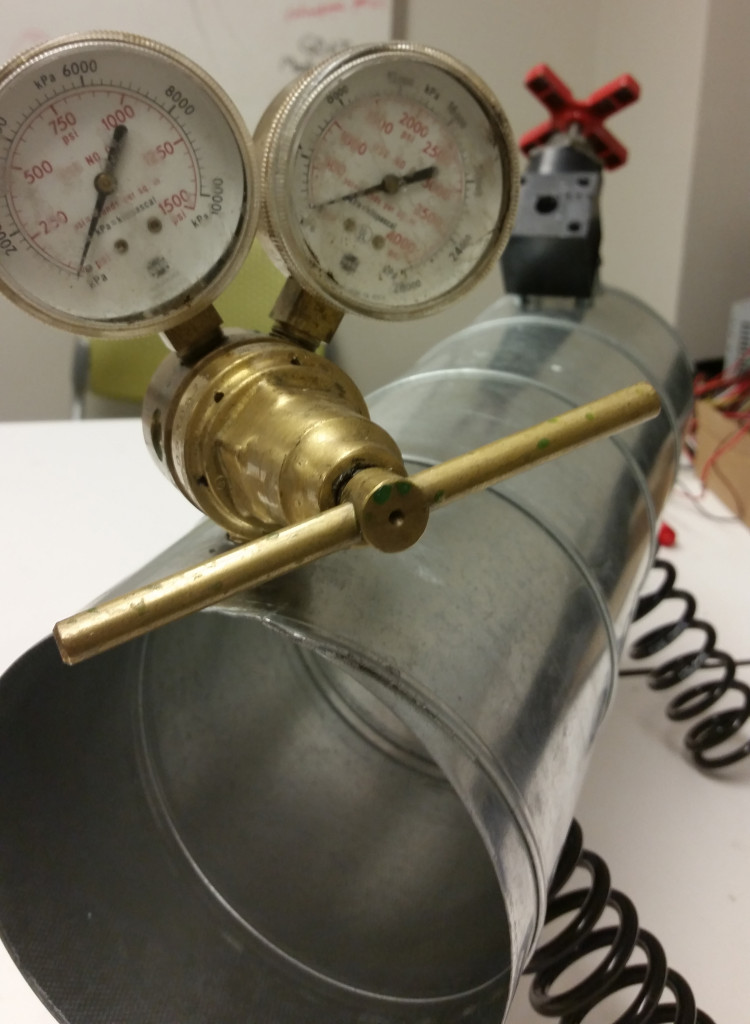 This exploration into an artistic creation has been very different than my usual design loop. I started with a problem of “make something”, which in itself is a much different jumping off point than I’m used to. What’s more, even once I figured out what I was going to try to make, I didn’t really know how it was going to be done, I just started. As I put certain parts together, others were discovered and eventually I had the entire picture in my head. This worked well in the sense of incorporating a timeline, where I was allowing myself to fast track the build of my piece, but in the end I finished with a project that isn’t fully cohesive. It could be argued that “lack of cohesiveness”, or “disorder” itself is an aesthetic, but I’ll be honest, it wasn’t the one I set out to make. All in all, I would feel guilty calling this a complete success. Even so, the product is kind of fun and the idea can be really easily carried forward.

My idea started after seeing the head valve lying deep within the storage room of the Mechanical Engineering department. Weirdly, my first thought was, “that’s kind of cute” (weird because I was thinking that about a valve, a completely inanimate object). I realized pretty quickly that maybe an aesthetic of cute, specifically cute everyday objects is an interesting feeling. I decided to make a puppy out of old industrial parts, trying to combine that feeling with an aesthetic commonly explored in our class, something more industrial-esque. I quickly found another fun valve that could be used for a tail, and a piece of ducting to act as a body.

I saw at that point the allusion to one of my childhood favorite tv shows, Jimmy Neutron, in which the protagonist (Jimmy) has a robot dog he built named Goddard (there’s a picture of Jimmy and Goddard below).

I named my assortment of parts “Goddard” in honor of my childhood, hoping I would be able to evoke the same personality Jimmy was able to in the construction of his robotic companion.

I decide to start building, before having figured out what I am going to use for legs. Throughout this project, I wanted to use as few tools as possible, just to make the recycled theme feel more raw, less post-processed. For that reason, I didn’t cut the ducting (it wouldn’t have come out very good with a dremel and I didn’t want to use a bandsaw) leaving me with a wiener dog by necessity.

I first attached the head, which was actually fairly easy. I found another male-male nipple that could thread into the ducting, although the ducting wasn’t quite thick enough to hold a thread, so after drilling a hole I capped the other end with a similar pipe plug to hold it in place.

The mounting of the tail posed some difficulty, because the valve I had already had mounting holes built in, although they wouldn’t mount the valve at the right angle to mimic a tail. I entertained making a mating piece out of steel or aluminum for a while (I even had it made on CAD, see below), although again machining a piece from scratch kind of ruined the whole upcycling idea for me.

I went instead with a strange bolt-mounting scheme I thought might work. I really wasn’t sure about this actually, and so before I drilled any holes in the ducting I made a pretotype out of cardboard to see if I could potentially get two flat pieces to mount at an angle, and what I would need to do it. As it turned out, it would work fine, but I would need to slot the holes and use some spacers to hold the bolts in place.

I then drilled out some mounting holes and then dremeled them into slots, and the tail was mounted. Looking at just the upper part of Goddard, I thought he looked a little bare but overall kind of fun. I had found the legs at this point as well, 4 old suspension springs.

I’ll pause here for a moment and step back to talk about one of the difficulties in this design. I was using all hand tools to drill holes and slots into a steel cylinder, trying to be as accurate as possible along the entire length with only a pair of calipers and a pair of eyeballs. Mounting anything precisely was a huge difficulty; mounting these springs was another animal entirely. I had laid out a strip of tape laterally along the entire cylinder to serve as a centerline, although even that was never measured, only estimated.

Again, I considered a mating piece between the spring and ducting but opted for simple adhesive, J.B. Weld, instead. I realized after mixing the adhesive I would have to tape the actual legs in place while it cured, something I hadn’t thought about at all. I ended up with a DIA looking tent structure of duct tape, which I had to just leave overnight and hope for the best. The springs were all placed in respect to the centerline, but due to their shifting and tendency to not stick perpendicular to the surface, I was stuck eyeballing as best I could. Given more time, I would have done each leg separately, but considering it is about a day to cure each I just did all at once.

The result was, as anyone with experience eyeballing will tell you, less than perfect. It took a few tries even to get the springs remotely close (I had to break off legs a few times and re glue to try to get a better fit – it was a very imperfect science). In the end, Goddard stands almost flat, close enough to dissuade me from trying to break off a leg and try to get it closer. He is, unfortunately, fairly lifeless. The springs are too far in, making him look less like a dog, and there is very little aesthetic appeal to the entire ducting. Maybe if the parts perfectly mimicked the canine form, it would be ok as a minimalistic piece but with the legs positioned as they are it looks somewhat awkward.

I would change a few things about this if I were to do it again. First, I don’t think I need to make the process as rigid as I did. For some reason I thought the lack of power tools or additional manufactured components would make this a more authentic upcycle exercise. I was right and wrong, actually. Cutting the ducting a little bit would have given me a much more realistic looking piece, worth the nonexistent price of using a bandsaw. I did like, however, being forced to come up with a more creative mounting system for the tail valve than just machining a piece.

The J.B. Weld worked well enough, although it’s still a relatively fragile project, especially considering the stereotypical sturdiness of industrial parts. If I were to do it again, I’d want to weld the legs to the ducting (just a few tacks). This would be much stronger and look better as well.

Finally, I’d probably do something different with the body. The ducting isn’t an entirely bad idea, although the finish leaves the end product lacking personality. I tested using a dremel to add some texture (just sanding in lines to mimic fur), although that didn’t look perfect either and would have been very time consuming. I would also probably cover the ends; being able to see right through an animal is not a very natural appearance.

I did have some things I liked, though. I thought the overall combination of aesthetics was really interesting and fun, and had it been slightly higher quality I think this is still a really interesting idea. I realized also an interesting message industrial animals could convey, along the lines of society and technological advances subtracting from the personality and innate attraction to animal emotions. In this regard, I think the hollowness of the ducting actually shows this message much louder than if it were a solid body, turning this into an intentionally hollow animal that lacks emotion.

I also liked the simplicity; I still think machining parts takes away from the recycled feeling. Especially in an animal “sculpture”, taking all random parts found in the bottom of storage gives it an “adopted from the pound” personality; he’s just a mut. Making parts would give him way too much purebred. All in all, I think it’s a cool idea that didn’t get made to its full potential. I am planning on partial disassembly to try to reconstruct him into more of a dachshund. If all goes well, I think other animals made from industrial parts (birds, cats, cows, etc.) could be really fun and interesting.