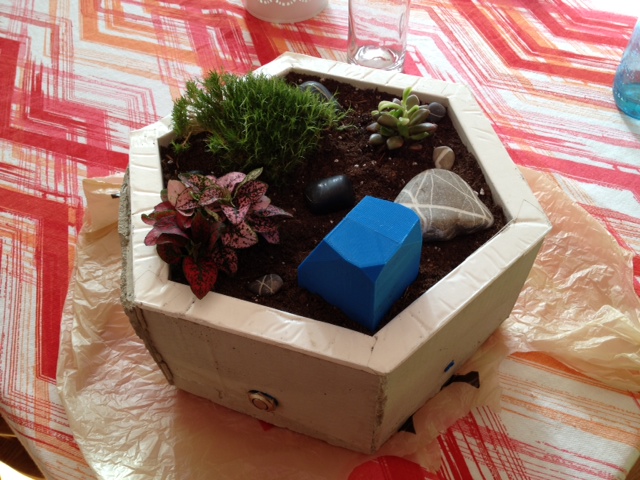 I made a desk garden. I wanted to work with water, plants, and light, and while it took me a very long time to settle on something, I finally did. I want a nice looking, modern planter for my desk.

Here’s an image of the CAD for my final design. I really didn’t want to make a CAD model. However, after a lot (days worth) of frustration over deciding on a design, I figured that I would probably end up 3D printing it, so I made it in CAD anyways. It’s two different parts: the base, which will hold water and the electronics, and the dirt box, which will hold the dirt and plants, and drain into the base. It has very few parts, is fairly compact, and the electronics will be easily accessible.

I had a box of quick setting concrete left over from another project, so I figured that the base of the desk garden would a good use for it. This would make it heavy enough not to slide around, even though it would require sealing. Using the CAD model, I designed a cardboard mold in which to cast the concrete. I laser cut the pieces and glued them together. I used 3D printed tubes for the thru holes.

As you can see in my previous update, it didn’t end up going too well at first, but I managed to finish it. The outside of the concrete base is not quite how I pictured it, but it works! I attached some 3D printed feet to the bottom of it to keep the concrete from scratching any surface it’s on.

I tried to 3D print the dirt box. Like everything else with this project, and frankly, always, my first attempt didn’t work! The box was too big to print in 1 piece, so I had to split it up. I printed one half, which took about a day, but it didn’t look good. Part of it peeled up during printing, and walls had big gaps. A few people offered suggestions on how to make it work, but I didn’t like it anyways, so I scrapped it.

I’ve worked with epoxy resin before, and I really liked the result, so I went ahead with casting the dirt box. Again, I used the CAD model to make a cardboard mold. I covered the inside of this one with tape because I’ve never had the smooth side of tape stick to this particular brand of resin, and I didn’t want the resin to adhere to the cardboard. Again, I laser cut the pieces of the mold and glued them together. I used 3D printed tubes to make the thru holes. I also taped the heck out of the seams on this mold, after the concrete pouring disaster… And no WD-40.

It came out with a wonky surface finish, I think due to the tape, and wrinkles in the cardboard, even though I tried to use the smoothest cardboard I could find. It also was a bit uneven, and I had to patch it where one part came out paper-thin. Had I had the money (and time), I would have cast the mold in silicone, then used the resulting silicone mold to cast the final resin. As it is though, I’m happy enough with it. I also drilled some holes for water drainage.

I cleaned up the concrete base, which even after a bunch of scrubbing with soap still smells of WD-40… I think it helped though. The outer surface looks more like it was cast all at once. I’m not displeased with it, although I really wish it were more uniformly shaped. I decided not to finish the surface, though I may try to seal it, if I find water likes to seep out. I sealed one of the inside bottom halves of the base with silicone where the water will go.

Now for the electronics… I used some of the same LEDs I used for Upcycling (the auto cycling RGB ones) and wired them up to a little acrylic ring I laser cut. I 3D printed a ‘rock’ to cover them, but it’s a little thick for the lights to shine through, at least during the day. I gave up on the pump for now. I’m a bit sad, but by the time I realized that I couldn’t put 1 Amp through the RedBoard, it was too late to order a relay or something to get the right voltage and amperage from the wall. I’m going to get the watering feature working over the summer though.

I got some dirt and put my little plants into it. I have a ton (maybe more like 30lbs) of polished rocks. My Dad collected some rocks for me from a river in Germany. They’re really simple and pretty, and I think this will be a good way to display them, at least until the moss spreads out, which I’m hoping it will.

To reflect on my original schedule and budget… Honestly, I didn’t stick to the schedule. Not even close. I really should have made more of an effort to get it done early on, but I didn’t. I was busy, and I did get very sick, but I can’t completely excuse not staying on track. Lesson learned: once off track, it’s hard to get back on. As far as budget, I originally estimated $95 for my very first design, which I ended up changing. Below is the cost for the actual final design (estimated, I can’t find some of the receipts).

My original estimate wasn’t too far off, so that’s nice.

My original goal for the aesthetic of the garden was minimalist. After looking at the planter for a while, I’ve decided that ‘minimalist’ doesn’t describe it. There’s too much going on. The final aesthetic is more modern, but even that doesn’t quite fit. I’ll think on it a little more.

Had I had time and money, I would have loved to make the base out of ceramic and line the visible parts of the plastic dirt box with dark wood veneer. I might actually try this someday. For now, do I feel like I did my very best work on this project? No. There’s a lot I would like to do differently, or over again. Am I happy with my final product? Yes, and it’s super close to being done. It’s got its flaws, but I think I can look past them, and I’m sure most people seeing this thing won’t notice them. I’m really excited to get the lighting and watering features working, especially after talking to people at expo.