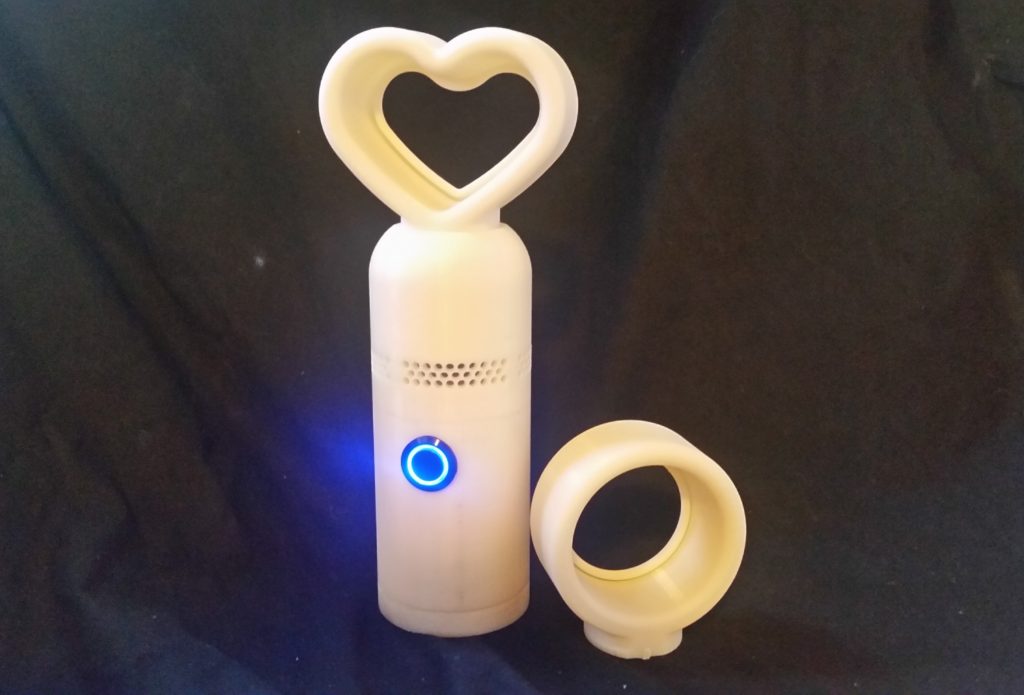 I am building a bladeless fan, similar to the Dyson fans but on a smaller scale and it is wireless and handheld. The whole frame will be 3D printed. The head piece will be removable and different designs will be made.

My prints have come completed and I am quite happy with the results. Unfortunately the fan is not powerful and actually inhibits the flow of the internal compressor. However, since this is a first prototype and I am mainly focusing on aesthetics I think it came out quite nicely. I achieved one of my main goals which was to have an interchangeable head so that I can create multiple different designs and readily change them.

Another issue is the cap at the bottom is extremely difficult to remove and requires pliers to get off. So it is currently extremely difficult to replace the batteries right now. To fix this I would have to print a new cap with a textured outside, perhaps with large bumps, so that it is easier to grip. I am currently running out of money in my budget so this may have to be something I fix in the future.

To fix the issue of the reduced flow I printed another head piece with a reduced outlet area to attempt to accelerate the flow more so some pressure can build up. After printing the modified head piece I tested it with the fan and it actually performed worse than the larger outlet area head piece. I may have to go to a lower area, or I must rethink how the technology actually works and analyze how air flows through the channels.

So in this post I am going get more detailed about the actual design. I will be covering everything from the flow profile to the circuit and wire routing.

One of the most critical parts of my design was the flow profile of the head piece. The way I created the head was by making a sketch and then sweeping it around a profile. Using this method the flow profile would always stay constant and to get a different design I could change the sweep sketch.

Notice the 0.06 dimension on the far right. This is the dimension that controls the area of the outlet.

The above picture shows how the profile is swept around a heart shape to create the final part. This rendering successfully captures the aesthetic I was going for in this project. Due to the manufacturing method (3D printing) I was not able to get a glossy finish, but if this were to be a product I would like to get it molded so I can achieve the glossy finish. Another idea would be to make it out of a clear plastic so you can see the internal channels in the fan this could help visualize how air flows through the piece by using a fog generator or smoke.

Another major design challenge in my project was developing a way for the head piece to be removable while still sealing to prevent any leakage. In the photos above you can see the base of the head piece and its mating feature in the middle section. There is a hole cutout in the middle section to allow for the headpiece to slide in, but there are also slots cutout within the hole to allow for the tabs on the headpiece to slide into and lock. This makes it a really easy two step process to remove and install the head piece, just insert into the hole and rotate to lock. You will notice that there is a raised ring on the middle section, this gets inserted into a pocket on the headpiece to create a nice seal. After testing with the fan I did not notice any leakage coming out of the interface.

The next challenge was finding a way to mount the fan, and routing the wires down to the bottom structure without them being overly visible.

To mount the fan I simply drilled and tapped the holes I needed. Originally I tried to print the holes, but due to the tolerance on the printer and the tendency of plastic to warp I had to open the holes a bit to get the tap to fit. To rout the wires I wanted them to be hidden from view. The black and red wires really stand out even though they are confined you can still see them through the inlet holes. To mitigate this issue I created rings on the side of the the middle structure to hold the wires up against the wall.

You can also see in this photo that middle structure and the bottom structure are mated to each other using printed threads. This was an interesting task as I had to take into account the tolerance on the 3D printer and how much the threads would expand. Basically I looked at an image of a thread and modeled it after that while getting my dimensions for major and minor diameters.

The circuitry for this project was pretty simple, I did not need to use a bread board, but it probably would have made it neater. Below is a diagram of my circuit provide by the manufacturers of the latching push button. I had to wire it up so that the LED only turns on when the device is turned on.

I wasn’t able to get 12V DC with any reasonable amount of capacity, so I settled for 9V DC with two batteries in parallel. This gives me double the capacity. 9V batteries hold around 500 mAh of charge, and my fan only takes up around 285mA at 75% power. So with two batteries providing 1 Ah of charge my fan can run for 3.5 hours continuously. This seems pretty reasonable to me for a handheld device. Unfortunately the cost of replacing the 9Vs over and over would add up with the fan is used often, so if I can find a way to run it off AA or AAA batteries and step up the voltage that would be best. I did not want the device to require 8 AAs as that adds a lot of weight and takes up space.

This has been a fun project overall and I think I learned a lot along the way. I may continue to improve on the design down the road, but for now I am running out of money and 3D printing gets expensive. Getting the opportunity to learn about bladeless fan technology, and then implement it into my own design was incredibly fun. Even though I didn’t get the performance I desired I still ended up with a product that demonstrates the technology while also capturing an aesthetic.