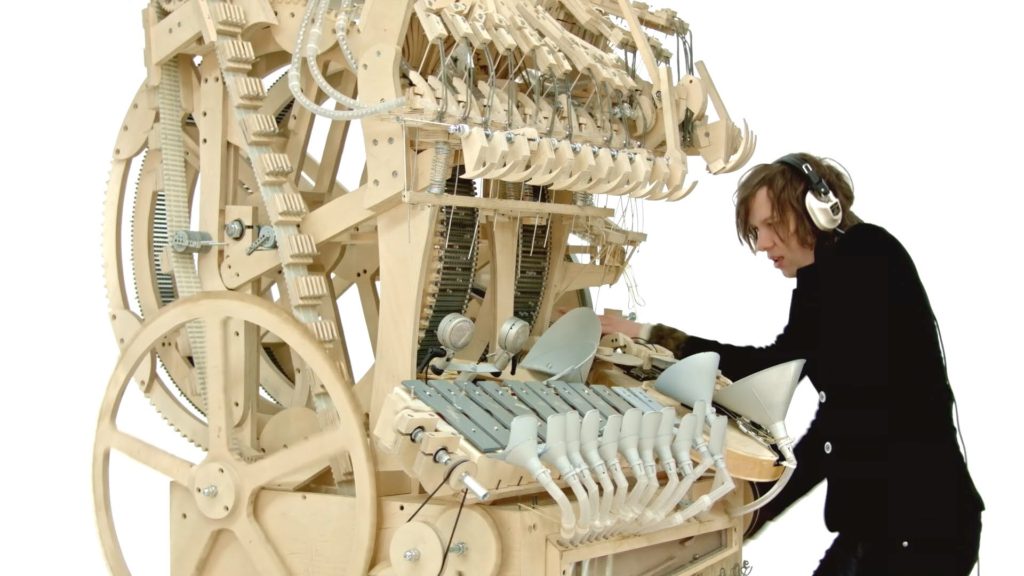 Overall, I’m very satisfied how the project turned out, though if I were to do it again I’d definitely do a few things differently. First, I’ll focus on what I think was accomplished in the current version.

The music box plays, and even plays a tune, though not very loudly. I learned a lot in making this version, and one of the most important lessons was with regards to the keys themselves. Because of their size, each string was only strung across about 4″, a very short distance compared to an entire guitar (the application the strings are designed four). Because of that, they need to be held with a lot of tension and don’t achieve very much resonance; they can’t vibrate very much over such a small distance. The resulting notes, while accurate, are quiet and sharp (not tonally, but harsh to the ear). While using these as a music making mechanism is a neat idea and definitely corresponds to the aesthetic, it does leave something to be desired in terms of sound quality.

While the chain drive worked and plucked all the strings, different notes had different volumes based on where they were on the box. The notes at the top were played louder than those at the bottom. This is due to a lack of chain tension, so the chain would actually sag towards the bottom of the music box, resulting in extra space between the plucking needle and guitar strings. This could have been easily avoided using some type of chain tensioning mechanism, though for this first iteration that was omitted simply because I didn’t understand the system fully and didn’t want to add anything that could potentially make it non-functional.

Finally, the plucking needle needs to be inserted and removed each time through because I ended up using a bigger drive sprocket than I had planned for. This means the needle can’t extend over it and would scrape severely if attempted. Absolutely a design flaw, though for a first iteration it is not a devastating lapse. In fact, I kind of like the motion, as it can be likened to setting the needle on a record player and then cranking it to play, just as the old phonographs.

This is probably my proudest piece of the project – I actually was able to achieve almost exactly the aesthetic I was going for. Finishing all the wood was incredibly tedious, but in the end it turned a piece of plywood from Home Depot into a beautiful backdrop for the piece. Additionally, the addition of the brass, from spay paint to the anodized aluminum cutout in the center, helped to bring it back to the old school jazz and brass instruments.

The piece does have an aspect of steam punk associated with it, though I didn’t intend for that. I realize now that pretty much whenever gears are incorporated into a design aesthetic, steam punk will most likely emerge. The gears coupled with the gold helped to amplify this feeling, though I don’t mind it at all. In fact, even a part from the old school jazz feel, I think the steam punk look mixed with natural materials (finished woods, in my case) is a really interesting and beautiful combination.

This piece was made to be a wall mounted stand alone artwork, and so as such I think I can leave it where it is, even with the current functionality bugs. It will be played very rarely, if ever, though just being mounted on the wall will be a very neat amplifier to my bedroom art. I had hoped to make the piece fully customizeable, with each key totally tunable and moveable, although that didn’t exactly work out. The keys are all fairly large, so they can’t move around as much as I had anticipated. Additionally, as I mentioned in my previous post, each sting gauge can only be tuned to about 5 notes, so I had to choose different gauges for different keys based on the song I was playing. I suppose it still maintains customizability, although changing strings is such a difficult process it isn’t really worth doing.

The string resonance issue was a very interesting takeaway, something I hadn’t anticipated or thought of at all until it all came together and I was tuning each note. I don’t think I ever could have envisioned that as being a problem before making something like this and seeing if for myself. The importance of chain tension was also reiterated; a lesson I should have learned way back in Component Design, I made a similar mistake and was fortunate the end product still was functional at all.

Either way, making music boxes could turn into a really cool hobby. I found this about half way through my project build and it made me feel insignificant in comparison. But hey, I did mine in a few months, and it was my first try. Maybe someday I can be like this guy.

Even as cool as this song is, I still think mine looks better.