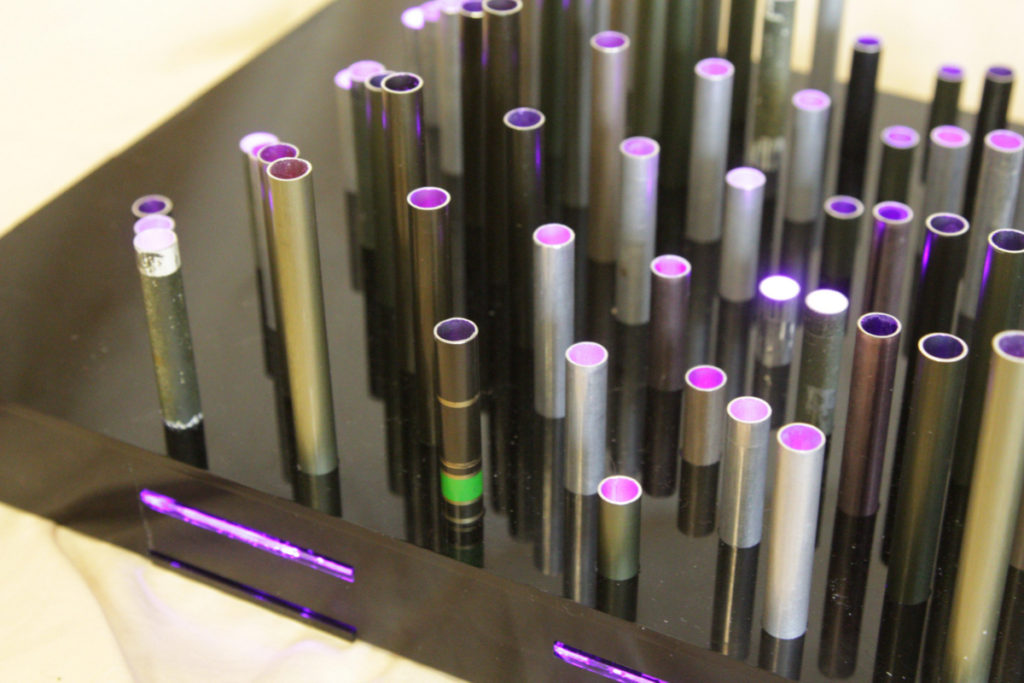 When I first started this project I had a very strong idea of what experience I wanted the viewer to have. Throughout the process of creating this piece of art, the actual design has changed multiple times, but the original intent has always stayed the same.

When I set out on the project I had two goals in mind, I wanted to highlight the old arrow shafts that I had from my grandfather, and to create a dynamic piece that not only changed with the LED light source coming through, but changed depending on the viewing angle the user had. I believe I was able to accomplish both of these goals. Some pictures of the piece viewed at different angles can be seen below.

When looking at the piece you can get a variety of perspectives on it due to the difference in arrow heights and placement in the array of lights. However, there still remains a level of symmetry in the piece which creates patterns when viewed. Additionally, by leaving the arrow shafts bare (unpainted), a level of individuality shown through for each arrow as each one had a different outward finish as well as different hue of color shining through. In the end an extremely individualistic yet uniform design came to life.

With respect to expo and having the piece viewed by the public, it was received rather well. The changing colors caught the attention of many passersby, and I had a lot of people interested in the design of the piece and wanted to know the story behind it. Overall I would call it a successful venture.

Reflecting back on the semester and what I have learned, I think the biggest thing that stands out to me is that you need to make sure to have a strong functional base to your product in order to let your design shine through. While I did a decently good job at prototyping the part, I should have put more thought into how I would assemble everything together. I knew that I wanted to keep a part detachable so that I could reach underneath if something went wrong, but never really thought about it until I had finished the design. As a result, the back plate does not sit completely flush on the rest of the body letting some light leak through. If I were to do this project again I would put more thought into the entire assembly of the piece.

In the end I was very happy with my end product and think I was able to get a nice, polished end result. Moving forward, I think I would like to give the piece to my grandfather this summer when I see him for his birthday. He was the one who got me into archery, and in many ways was the inspiration behind this project so I can see no better place for this piece to call home.