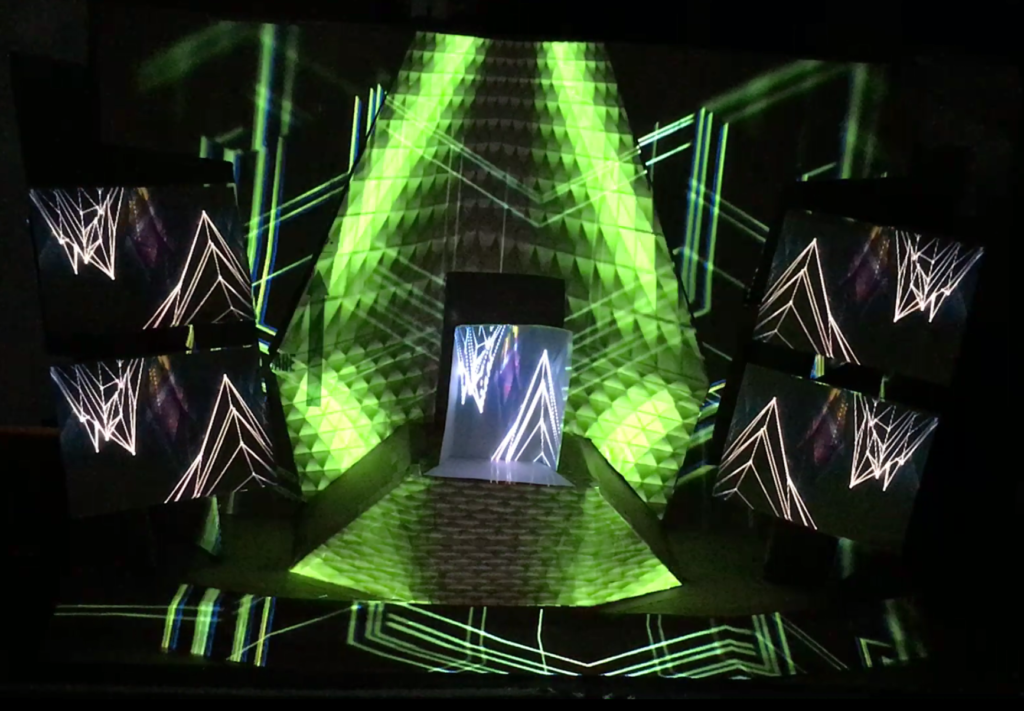 The above videos are demonstrations of my Upcycle project in action.

My aesthetic is modeled after other EDM stages I have seen in the past. The general visual aesthetic combines moving graphical elements, whose colors are complimentary, with some of the elements timed with the music. I created an original design for the structure, but was inspired by stages created for Amon Tobin, Deadmau5, and Datsik. Reference to these inspirations can be found in the following videos:

The stage is mainly constructed out of cardboard, reclaimed from furniture boxes, as well as a central “DJ area” made out of white computer paper. The current model is designed to be a scale model of a larger stage design. It has large areas towards its back where large images or video can be projected, and smaller, foreground features that allow highlight projections to stand out.

An image of the projection stage.

My design loop approximately followed a traditional format, and used an iterative approach. I began by sketching possibilities for features for the stage, eventually settling on one aesthetic in a final sketch. Then, I created a first version of the stage, with the main floor and minor components in place. Drawing from my sketches once again, I decided to add a large backdrop to create more three-dimensional spaces in the upper area of the stage. At this point I experimented with the current model, seeing how projections would look with the current mappable area. I then chose to add additional (mostly) forward-facing surfaces, that provided more compartmentalized space to create projections, and was satisfied with the final aesthetic. In the end my main methodology was to add features incrementally, and test the aesthetic along the way.

Below is a graphic illustrating my design loop process:

After finishing this stage I am pleased with the result. Functionally, the stage meets the specifications that I set out for it, which were to create a scale model of a larger EDM stage, with surfaces for the stage that allowed the projections to create the illusion of depth. Artistically, the stage met my expectations as well in its psychedelic design and in its serving as a representation of a scale model EDM stage.

I plan to continue to work on this project by creating additional projection-able surfaces that extend along the sides of the stage towards the audience. With these additional surfaces, I hope to create the illusion that the video animations wrap around the field of view of the stage viewers. Additionally, I would like the visuals to feel like they are coming from behind or above the stage, and plane to create more surfaces along the top of the stage that point outward and downward towards the audience.

Below is a video of my presentation, showcasing the stage project: