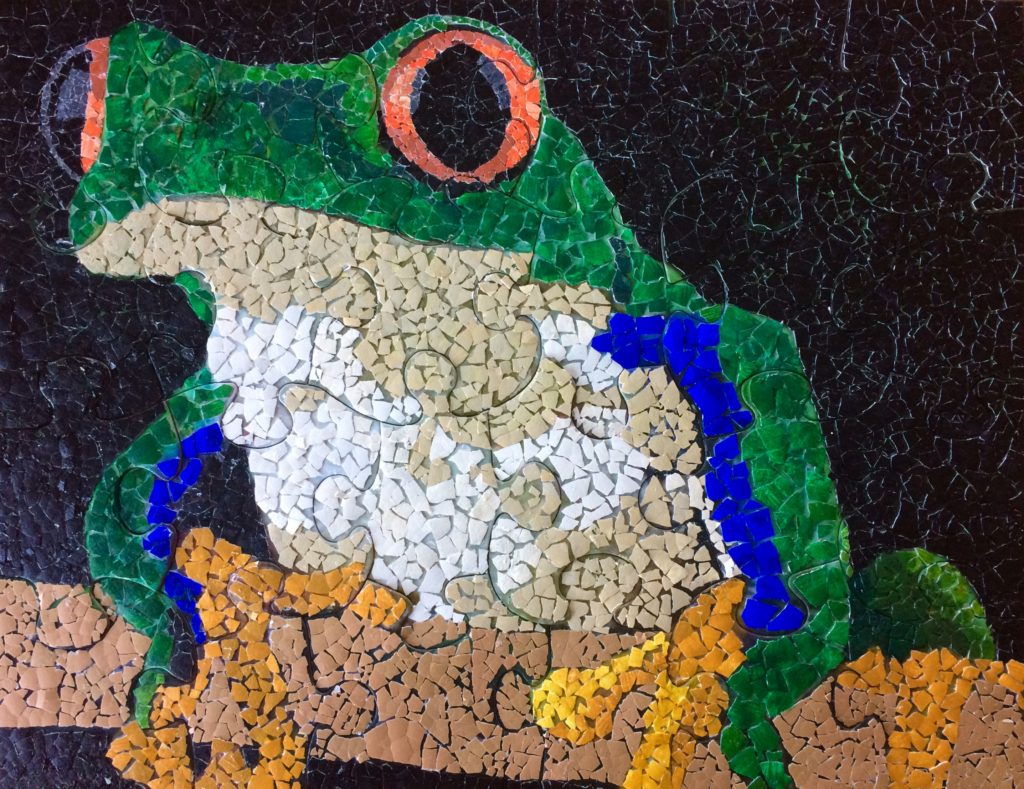 What I have learned in regards to my upcycle design process:

Let me start by explaining how my upcycle project has progressed from start to finish.  As illustrated in my diagram below, I began with ideation, thinking deeply about the things that inspire me most and solidifying an idea within this realm that I both loved and thought few others would tackle.  Inspired by the Landfill Hamonic, I decided I would create a ukulele.  In this design, my main challenge was designing functional tuners, but I worked to iterate, testing different setups that eventually led to a solution I liked.

However, the more I investigated my choice of an aesthetic, the more drawn to puzzles I became.  Perhaps I could make a puzzle within a puzzle!  Therefore, instead of incorporating the puzzle aesthetic in the design of my ukulele, the puzzle became my function and my aesthetic became Gaudi mosaics.

This decision was a hard one given the fact that I do love music and was deeply excited about working through the more functional design challenges of my ukulele.  However, I eventually reconciled as I found how many people had already created recycled guitars and other stringed instruments; I wanted to do something different…as I often do.

Incredibly amazing to me was also the fact that I had already built such an emotional attachment to my ukulele idea.  Seriously fascinating…and a bit scary!  I imagine attachment as such may be highly beneficial in terms of project motivation, but during moments when one must make objective decisions regarding when to cut product development of an idea that has gone sour, this kind of attachment could be quite costly.  As a business student, it is important for me to know when to let an idea go (depending on cost-benefit analyses) which is most certainly a hard thing to do.  As innovators, often, our ideas become our “babies.”

The first inspiration from which I have drawn in the creation of my upcycle project is the artwork of Antoni Gaudi.  Antoni Gaudi was a Catalan Spanish architect who lived from 1852 to 1926 during the height of the modernisme movement, a movement focusing beyond traditional art forms.

Gaudi’s creations are distinctive in that they draw largely from his fascination with nature.  Gaudi has even been recorded saying, “Those who look for the laws of nature as support for their new works collaborate with the creator.”  For this reason, Gaudi utilized natural or broken materials such as ceramics, stained glass, wrought ironwork, and carpentry to achieve a more organic aesthetic.  Gaudi’s work is no doubt known both for its immense scale as well as for its extreme intricacy and vibrant use of color.

Interestingly, Gaudi has been one to make a profession of upcycling.  He spent days collecting broken cups, plates, and other ceramics from local manufacturers for use in his designs.  Sculpting and ceramics as a whole is an integral part of Spanish artistic tradition, so he was certainly not short on supplies.  This technique became known as trendcadis, more commonly referred to as mosaics.  “El Drac” (the dragon below) is an example of a famous Gaudi creation, but note that it is situated as just one of many amazing mosaic masterpieces included in his design of the entire Parc Guell in Barcelona.  I can’t help but be inspired!

My second inspiration is the puzzle that I incorporated as the base of my mosaic.  This puzzle was one that I had saved from childhood.  Given that it was only 24 pieces, I decided to make it a bit more exciting.  I would like to make it clear that the photograph of the frog depicted in this puzzle is not my creation.  Rather, it is that of the puzzle company, Casse Tete.  More information is shown below.

However, my choice in embellishing this particular puzzle was entirely intentional.  Of the puzzles I had acquired, this one spoke to me of Gaudi most in that it depicted a highly natural scene: a frog not unlike the lizard designed by Gaudi pictured above.  Beyond this, my chosen puzzle holds a variety of exciting colors.  In contrast to the black background I created, the royal blues accents, fiery red eyes, and contrasting yellows and greens make for a high satisfying visual display.  I also had a great deal of fun working to include proper shading techniques on the surface of the frog by applying various tones of the colors I used to create the illusion of both shadows and reflections.

My final inspiration is my sister, Sonya Schuppan, currently a freshman studying Mechanical Engineering at CU Boulder.  In reviewing her previous egg shell mosaics, I was fascinated by her pixel-perfect placement of each individual egg shell and was particularly impressed with the range of tones she uses in her shading.  Having given this technique a shot, myself, I now have an even greater appreciation for the work she does so well.  Thank you, Sonya, for the phenomenal egg shell idea that evidently made my project a success!

My vision for this project is centered upon the idea that nearly everything (objects, thoughts, people, etc.) are subject to infinite complexity. In the context of my puzzle, each piece of egg shell comes together to form one puzzle piece and each puzzle piece comes together to form a puzzle.  Similarly, one might analyze a photograph in terms of pixels, each playing a specific role in creating the images that we see.  In terms of a physical object, perhaps we see the makeup of elements made of atoms made of protons, neutrons, and electrons all the way down to quarks.  In people, we see barriers and true colors, both of which are dimensions of infinite complexity.

My main functional goal for this project was that my puzzle be doable.  I did not want to end with a puzzle that could not still be taken apart and put back together.  Thus, in terms of my functional goals, reality did meet my expectations.  However, one important note to make is that given the ambiguity of pieces following the addition of egg shells, the puzzle is now more challenging to put together.  However, I believe this to contribute to my vision for the project in that once the complexity of an object, person, or thought is exposed, it is often more difficult to reassemble.

My main artistic goal for this project was that my creation should resemble a Gaudi mosaic.  Thus, because of the organic form, focus on an amphibian, use of vibrant color, and imperfectly broken ceramic-like materials incorporated in my design, my artistic goals were met and reality did meet my expectations in this area as well.

What I was not expecting as part of this design was the extensive investment of time.  Of course, I am more than willing to spend hours upon hours on a creative endeavor as such, but I simply underestimated the time this would take within the context of this project.  One puzzle piece took me at least 45 minutes to assemble so one can imagine how this quickly spiraled into a 24 hour plus commitment.

In terms of execution, my main steps are listed below:

The photos below are those of my finished upcycled Gaudi mosaic puzzle.  The first photo shows the finished product as a whole.  The second emphasizes the fact that pieces may be both separated and reassembled.  The third photo shows a dime placed on the top right puzzle piece to emphasize the size of each egg shell piece.  In total, the puzzle measures 11in x 8.5in.

In terms of next steps, I would like to keep my puzzle and display it as a piece of art.  Because it is only 24 pieces, it is not an incredibly fun puzzle to do, so functionally, I don’t believe it is of high value.  Therefore, moving forward, as suggested by classmates, I may investigate creating a display case, frame, or glass covering in which I can hang it on my wall.

Below is an informal presentation shared with a pod of nine individuals also participating in this assignment and course.