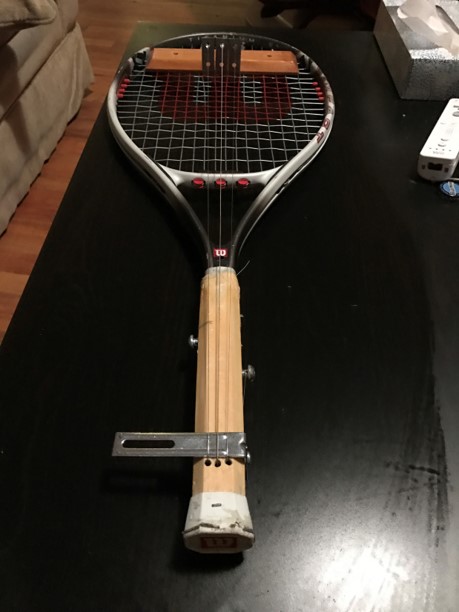 For my Upcycle project, I constructed a guitar out of leftover household items, such as a tennis racket, a block of wood, and some L-brackets. The original inspiration for this project came from watching a street performer playing something similar years ago, and from the tradition of people constructing their own instruments. I had also recently seen a movie called It Might Get Loud, in which Jack White builds a guitar out of nothing more than a 2×4 and a bottle with guitar strings, which reminded me of the idea.

I knew I wanted to construct a guitar out of something I already had, so the next step was looking at the important parts of a guitar and how they work. Several components must work together for a guitar to be able to produce sound. For this step, I drew a picture of a basic electric guitar and labeled the important parts and what household parts I could use to serve that purpose on my design. After that, I drew a picture of what a tennis racket guitar would

A sketch of a guitar and its most basic components

A sketch of a tennis racket guitar

Originally, I just wanted something that could emulate the appearance of a guitar and maybe have some functionality. My first couple of sketches were just of guitar shapes and I tried to think of items that looked similar. This idea changed after I did some research into DIY guitars and realized that to make a simple guitar that could produce sound would be possible with a few design changes. I had spare guitar strings at my house and several leftover brackets and fasteners from my senior design project, so I figured I could attach them to an old tennis racket that I had and use it as a guitar. I found an article on how to do exactly that online (link at the bottom), and so I used that idea for a few of the parts of the guitar. For my final design, I wanted it to produce sound with multiple strings and for it to be possible to modify the pitch of the strings similar to tuning an actual guitar.

Functionally, the tennis racket guitar worked for the most part. The bridge (made out of L-brackets and a piece of leftover wood) worked well and the spacers used to hold the back end of the strings did not slip.

The strings themselves played loud enough to be heard, and the pitch could be altered with the tuning screws on the neck of the guitar. The tuning screws were made by looping the strings through the neck of the tennis racket and tying them around a screw that had a hole drilled down the center. After they were secured into the neck, they could be adjusted by using a screwdriver to either tighten or loosen the screws themselves.

One problem with this design was that the tuning screws did not have a lot of material to be screwed into, and over time the strings started to go out of tune very quickly. This could be fixed on future versions by building a more secure tuning device, such as the worm drive system used on traditional guitars. Another improvement could be mounting a microphone or pickup onto the tennis racket under the strings. This could be used to amplify the sound, which allows for a lot more possibilities while playing it. Overall, this design worked well to emulate the basic functions about a guitar and I understand them a lot better after working on it.

Aesthetically, I was originally going for something that looked like an old blues instrument. I wanted to have a worn look to it. Unfortunately, the tennis racket I had did not really have a vintage look to it at all, and the frame was mostly made of metal. After deciding to use the L-brackets for the bridge and neck part, about half of the guitar was metal. It started to resemble something that a person busking or a street performer would use. These people are usually creative and they can repurpose objects into something musical. My guitar wound up having a mismatched, stitched-together look to it and I thought that mirrors the street performer aesthetic very well.

If I want to continue to develop my tennis racket guitar, the next step would be to refine the tuning system, as I mentioned earlier. This combined with a source of amplification would be the main improvements that would need to be added. Ultimately, what I want to do is build my own guitar from scratch one day in my spare time. It is something that I have always wanted to do, which makes sense as an engineer who plays guitar. Working on this project gave me a lot of insight into what it takes to make a guitar work and a lot of information about their construction, which would be very helpful for when I build my own!

Link to photo of Jack White: