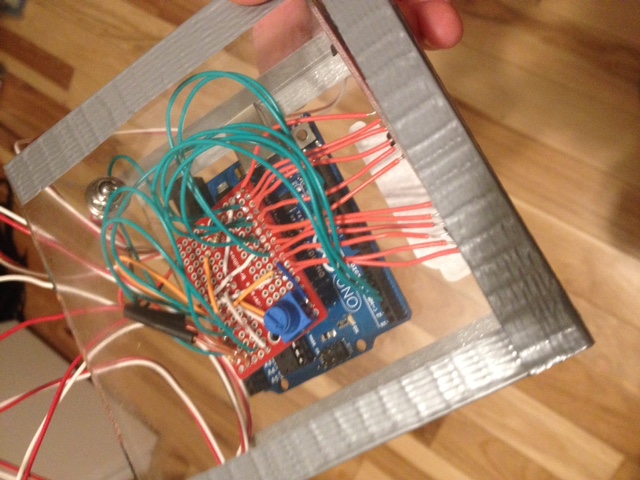 My idea for the upcycle project was born out of necessity-my car doesn’t have a thermometer, but I have always wanted one. I suppose I could have gone out and bought one, but that didn’t seem right-this fancy education should be teaching me something, right? “maybe I can build one” I thought. The upcycle project was assigned around the time I had this thought, so it all made sense. The ITLL is full of old electronic components and acrylic-everything I thought I needed to make a digital thermometer. For the most part, I was right.

The crux of the upcycle project is that it utilizes old, unused parts and creates something better out of them. For several days, I prowled around the ITLL, asking staff members, other students, and just rummaging through bins in the project depot for old components. I found a thermistor (a resistor that varies in resistance depending on temperature) and a LCD display from Tim May in the electronics lab, a protoboard, battery hookup, and switch in the project depot, and remnant acrylic under the laser cutters. From there, I began looking online for code/suggestions on how to make the electrical side of the project work. This was the most difficult and time consuming: I have never in my life done a project with Arduino that works the first or the second or even the fifth time. Troubleshooting is the name of the game with prototyping electronics. Needless to say I was very excited when I finally displayed a temperature on the screen.

The design process for this project was not very linear: I had to use what I could find, and I was always finding new stuff, so I was constantly redesigning my project based on what I had found: going on the internet and figuring out how something worked, looking up datasheets, finding out if it is compatible with my other hardware, etc. I kept looping until I found a set of components that all worked together, and from that point I was able to make a final electrical design, and from there a design for the housing.

The next step was housing the finished electrical product. This is where the aesthetic really gets tied into the project. I used the laser cutter to cut the acrylic I found into the necessary shapes, cut out holes for the screen, switch, and thermistor wire, and then began putting them all together. I was originally going to use L brackets and screws, but duct tape fit in with the aesthetic I was going for more. I wanted the project to match the aesthetic of the place of its conception-the ITLL. In the ITLL, all the building systems are prominently displayed, either out in the open or behind clear panels, to give students an idea as to what goes on behind the scenes to keep a building running. I used clear acrylic for the same reason: it is educational industrial chic, it lets the user see inside and try to figure out how it all works. It looks a bit less neat and tidy than an opaque housing, but I believe it is more dramatic. The clear acrylic and duct tape also give a nod to the building’s main visual pattern: glass and concrete. Much of the ITLL’s exterior is covered glass windows, and the structure is outlined by very regular squares of unfinished concrete. The structure is much like dozens of stacked cubes who’s edges are unfinished concrete and sides are glass. My project is visually the same: a boxy rectangular prism with clear sides (the clear acrylic) and unfinished gray edges (the duct tape).  It is a very open, industrial, sleek look. I like it. I hope to expand this project to include altitude readings in the future, it shouldn’t be too hard to add that functionality. The project ended up much as I envisioned it, and I am pleased with the result!