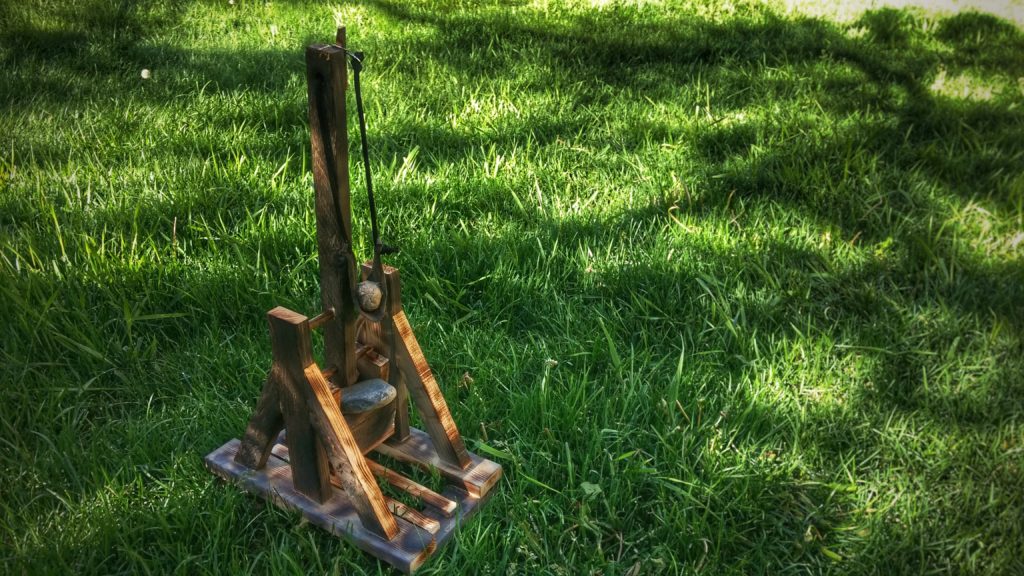 The ‘why’ question for my project can be classified into two different aspects – 1. Why did I choose to make a trebuchet? and 2. Why did choose the aesthetic I decided to go with for the trebuchet? I’ll address both the questions in the following passages of this report.

My love for trebuchets came from a rather intriguing source – a video game. I used to play quite a lot of Age of Empires during my undergrad days. It wouldn’t even be a stretch if I said that I learned as much ancient world history from the game as from my high school history lessons. And this is where I learned about the trebuchets being used for siege of enemy castles. If properly protected with the right troops, a few trebuchets could easily destroy a whole enemy town in a few game minutes. It’s the only siege weapon in the game that could attack a castle without getting within the range of the archers mounted on top of the castles. This made the trebuchet my favorite weapon of choice in the game. The sheer number of memes on the internet proves that I am not the only one with such a fascination for the medieval marvel. So when we asked to make something dynamic, I knew what I wanted to make. However, choosing an aesthetic for such a functional design which didn’t have to look like anything aesthetically was always going to be a challenge. That brings us to the next ‘why’.

However, going with these kind of aesthetic wouldn’t be true to what the trebuchets of medieval ages represented. It represented death and destruction. They were anything but a piece of art unless you argue that destruction is an art. Even then, art deco or art nouveau will never be able to do justice to what these wonderful weapons represented. So, I decided to make it look as original as possible, to make it look like it’s been battle-worn. I wanted to make see how a medieval trebuchet used in a number of battles and decommissioned and preserved till present day will look like. An initial design sketch for this aesthetic and the final product are shown below.

I am really proud of the amount of work I put into this project and really happy about how my efforts have resulted in a great looking product. Now, I have a nice toy to play with (Yes, I still play with toys sometimes. Please don’t judge me!). I think I can still tweak the design to increase the range further. On the aesthetic side, one of the suggestions I got during my presentation to the class was to have some kind of a crest engraved on the trebuchet. I thought this would be really cool. However, I couldn’t do it because of some time constraints. Also, I don’t have any skill whatsoever relating to engraving or carving on wood. I am really considering to learn the skill and the trebuchet could be the perfect test subject. This could potentially be my cool new hobby. The possibilities are limitless which essentially means I am not done with this yet!!!