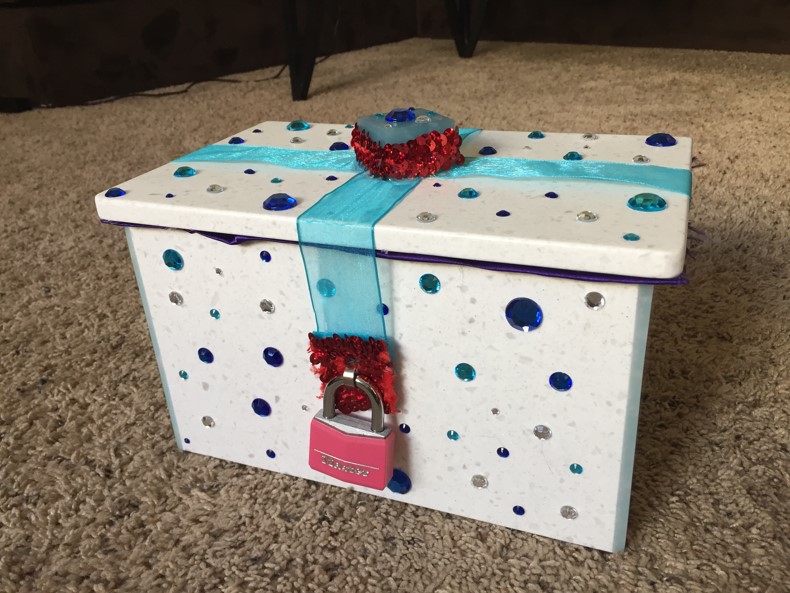 For my final project I decided to make a lock box for my girlfriend Eve who is currently studying abroad in Argentina. On Valentine’s Day before she left I gave her this key and a lock and told her that I will have this box filled with everything that she missed out on in her absence. This was the main motivation for my project. I wanted to make something personal and one of a kind.

Going into this project I had 3 keys to a successful design that I wanted to focus on for the entire duration of the project.

I really wanted this project to focus less on the engineering side and more on the aesthetic side so it’s fair to say that objective number two was the main focus of the build.

From the engineering side of the build, my inspirations for the project came from my previous upcycle project (the Corian box). I planned on making a box of a similar shape but this time it will serve a different purpose and will have attached hardware making it function like more of a treasure chest.

I also gained some inspiration from crazy shaped Corian lamps that my dad told me about and I found online. These lamps are made out of Corian material that are partially transparent so when a light is put inside it illuminates the whole body creating this very beautiful glow that fills the room. I feel that my knowledge and experience with fabricating these boxes and my new found knowledge of these lamps really helped me excel with this build.

For the aesthetic portion of the build my design was little more complicated. I chose to go with a traditional modern aesthetic with a twist. I decided to incorporate the two Disney Princesses that remind me of Eve the most. The first being Queen Elsa From the movie frozen due to the fact that she is strong, independent and a little lost. You can see that the blue exterior represents the ice queen herself. I chose to go with the blue gems because they reminded me of ice crystals and they cover the front and top faces of the box showing that they are pronounced but they do not define the project nor does one thing define Eve. The blue ribbon was also representing the sense of security that eve has. She does not want to be hurt so sometimes she shuts herself down and locks the box. The red and along the top and the ribbon hints at something deeper because with eve there is always something deeper to her.

When you open the box you open yourself up to a whole new world (Aladdin reference). The Ariel side of Eve, princess number two. This section represents who she is as person. She is fun loving, polite, brave, and adventures like the mermaid herself. I chose to go with a silky purple fabric along the inner walls because it gives a regal feel to the project. Along the bottom of the box lies a scaly fabric wrapped door that represents the tail of Ariel. Now knowing what is inside the box, the red deeper meaning on the outside becomes clearer.it represents the red hair of Ariel. It’s a subtle hint to who Eve is on the inside as seen from the outside.

Underneath all of that is the heart of the project. By turning the box over on its side get to see the lamp that lights up the room just like Eve’s smile. A small button is located on the inside of the box that cause this effect. Notice that the bottom portion is slightly transparent and fits the theme of the outside very well.

None of this would be possible if it couldn’t stay together and be functional. To properly do this I had to incorporate a few pieces of hardware. As you can see I used box hinges, a HASP latch, led lights and a pad lock. The hinges were the hardest part to incorporate into the project. The material I am working with is a very tough brittle material that does not take kindly to being screwed into due to its tendency to fracture as it undergoes compressive and tensile forces from the screwing. To solve this problem I drilled a small hole in the location of the screws with a diameter slightly smaller than the thread diameter of the screw. After, I filled the whole with superglue and slowly screwed in the screws. Doing the puts less stress on the screw resulting in a secure, tight fit that will not fracture. I did the same thing for the HASP latch on the front but this was way less stressful due to the larger surface are on the front face. The LED lights, I found around my house. They are battery powered and are bright enough to produce a sufficient amount of light.

As you can see the majority of the price came from materials I bought at the crafts store. I was able to save a lot of materials that were not used in this project. They can now be used in the future on a different project.

Overall I feel like this project was a success. I think that I accurately captured all of the objectives that I intended to with the build. There are still some improvement that I would have liked to make within the project. I don’t like how the box needs to be flipped onto its side in order to properly see the lamp. I would have liked to have a lid support attached to the box so that the lid does not slam shut or rip the lid off the hinges. I can possible add taller legs on the bottom of the box making the light a little more visible but I am indeed happy with the results.