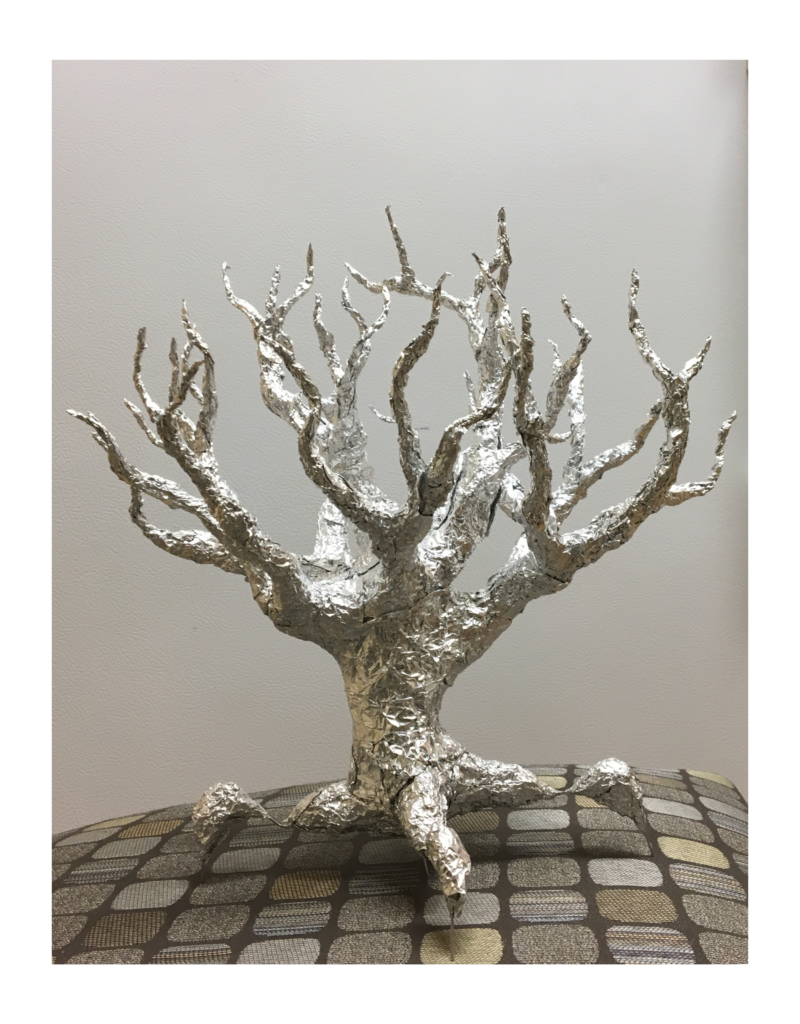 Looking at the materials I’d have available to me for the up-cycling project, I decided to use paperclips and tinfoil. After some brainstorming with friends, I landed on insects as the subject-matter; I felt the wiry nature of the paperclips lent themselves well to the construction of limbs. I also felt it best to take an abstract approach to the design of the insects, to leave room for creativity in their appearance.

I wanted the artifact mostly to serve as a sculpture, so there were no functionality considerations beyond the ability to stand upright and remain intact, which was a concern considering the process would mostly involve layering tinfoil. Having made several pages of sketches, I settled on a roughly horizontal figure, and a circular figure. Then came the task of soldering together paperclips to realize the designs.

The process proved to be quite arduous, since the only soldering station I had available was made for circuits, and I had no one there to assist me. It meant I spent most of the five hours or so figuring out how to hold up the paperclips in a way that I could solder them without pieces falling.

Once I’d finished the skeleton, I wrapped extra portions of solder around the joints for stability.

The next stage was the initial layer of tinfoil, during which, I took a liking to the contrast between the thin paperclip skeleton and the thickness of the surrounding tinfoil.

At this point, I felt a bit creatively stifled, I liked the look of the central portion, but couldn’t really keep it exposed if I wanted to build upward from the middle, which seemed to be my only option, so I made the sacrifice.

Again, this step brought about challenges, involving lots of trial and error in properly adhering the tinfoil to the skeleton. For the majority of the build, I added tinfoil in long strips, as that made it easiest to wrap around securely.

Although, for this step, I needed to use large squares to cover the entirety of the body, so the pieces would keep the legs stable.

From there, I wanted to build upwards, taking inspiration from
Hayao Miyazaki’s film Howl’s Moving Castle.

I particularly liked the ramshackle nature of the structure, how the parts felt somewhat cobbled together, highlighted by how it lurches along in the movie. I felt it would end up being a step away from my initial vision for the bugs, but I wasn’t married to that idea and thought this would be the most logical path forward.

On the topic of deviating from initial concepts, when comparing my perceived design process to my actual design process, I felt the two mirrored each other fairly closely.

Moving from initial concept to my final results usually involves three loops: first the push from my preliminary thoughts towards an idea I can realize, then addressing obstacles, either by perseverance (often creative solutions), or a slight alteration of my concept. In the process of this up-cycling project, I would say I didn’t have much difficulty in defining my initial concept, but over the course of the build, I found myself wanting to push in other directions, either out of practicality, or coming to realize that my first thoughts weren’t as interesting.

Utilizing the same structural principles, I secured vertical skeletons to assist with the initial vertical layering.

As before, the design underwent a number of iterations.

Going along, I settled on a branching tree structure; each of the main four branches had a paperclip spine.

Adding onto the branches had the same general rhythm of first wrapping a slender portion around the ends, then wrapping the middle and further wrapping the base such that the branch wouldn’t fall off due to the added weight.

Around this point, I came to a crossroads, wherein, I decided I wanted to commit fully to the tree aesthetic, and create a more realistic looking sculpture, opposed to the abstract, smooth limbs seen here.

This choice meant I wouldn’t have time to build the other insect, as finalizing the branches would prove to be fairly time consuming.

Past this image, I added a few more thin branches, but the structure was largely complete, leaving me with a large pile of scrap tinfoil, which is ironic given the nature of this project.

Functionally, I’d say my goals were achieved, considering it can stand upright as intended and no limbs are so loose that they’d break off without tampering. In some sense, I only completed half my initial goals, in that, I only made one “insect”, though making two was fairly ambitious and I was aware I might not be able to complete both.

Aesthetically, it’s a bit harder to pin down. Overall I’m satisfied with the look of the final artifact, even if I didn’t have a very specific vision going in. Moving forward, I doubt I’ll add anymore layers or alter it much past where its at right now, though I think I will keep it as a decorative sculpture.