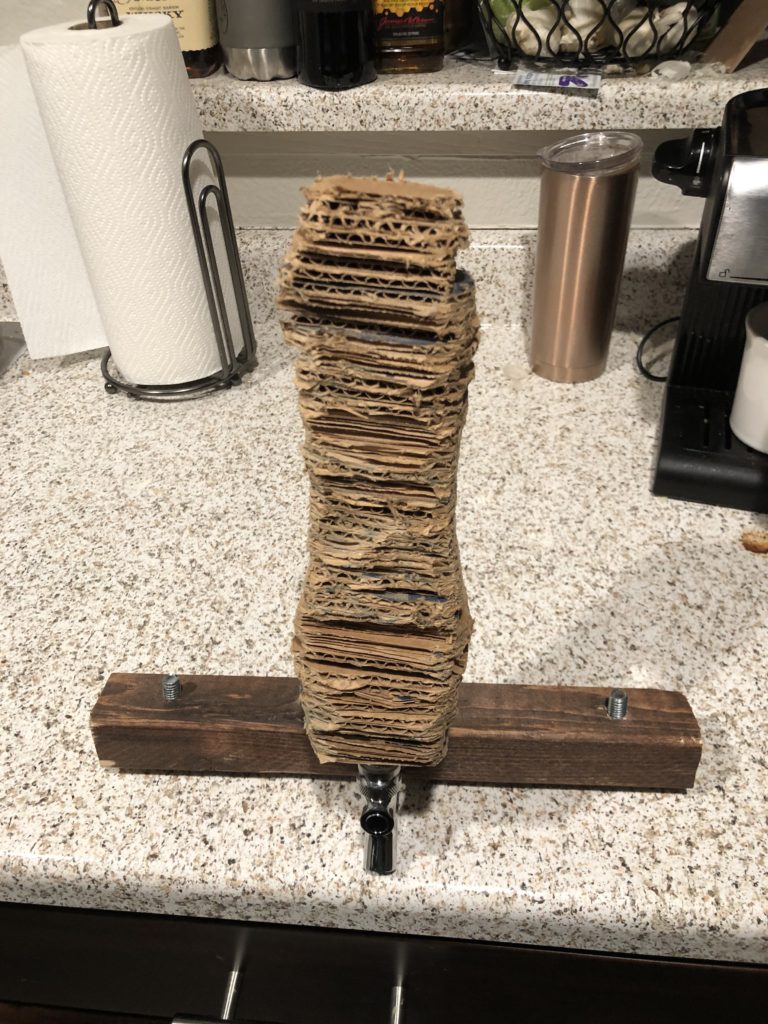 Though this upcycle project wasn’t intended to create something functional, I wanted to use it as a challenge to apply an aesthetic to what I want to create for my final project in this class, a beer tap handle.

Initially, I was inspired by some posts I’ve seen online of people using their failed 3D print scraps to create art, claiming there’s “no such thing as a filed print.”

However, I realized that I didn’t have many failed prints and scraps left, as I recently threw out a full trash bags worth of them, so I had to find a new material. Luckily, I had lots of Blue Apron boxes I’ve been saving for reuse, so I decided that using them would be an easily available and abundant material.

I wanted to keep the aesthetic of an additive technique used to create the project like the 3D print aesthetic would have given, so I decide to use the cardboard as the layers of the piece glued together to achieve it.

I’ve seen some artists that use laser-cut pieces of cardboard glued together to create a 3D object, so I wanted to recreate that with my project.

To create the handle, I cut out lots of squares from the box, and began to glue them all together to create the base out of which I would shape the handle. The typical tap handle is about 10 inches tall, but I knew that this method wouldn’t create a very strong handle so I decided to keep it slightly shorter than that to prevent it from breaking by bending too much.

Once the glue set, I used a Dremel tool to do my shaping of the handle. Unfortunately, the cardboard didn’t cut away in a sculpting manner as much as I had expected, so it took some trial and error to be able to shape it well.

The final product turned out well, being able to get the ergonomic curve where you should grip in the middle of the handle that I wanted to portray in the shape. If I had to repeat this project, I would definitely change a few things. For one, I would use a much sturdier material that I could shape with the Dremel tool. I liked the idea of being able to shape it physically rather than just glue the pieces together, as it gave me more of a feel of control over my design. Using a more rigid material would also make it more functional and less fragile.

Overall, I enjoyed the creation process of this project, and I may do something in the future to create a handle with this aesthetic to it (possibly cast it in resin).