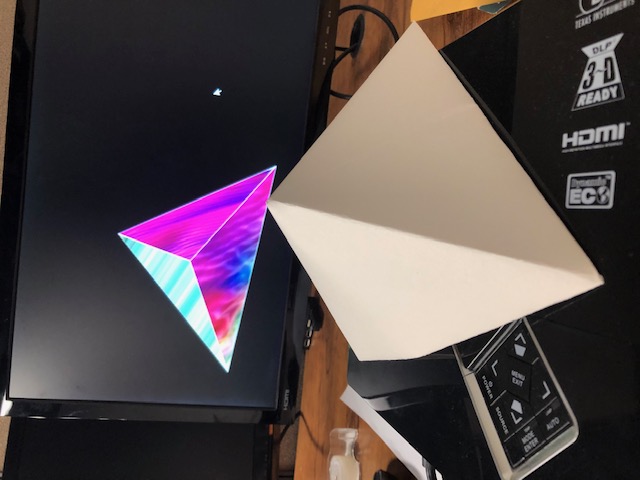 All of this work had to come to an end at some point, so I thought I would summarize what I have been working on and tell you all a bit about my project. To begin, I went into this class knowing that I wanted to learn more about micro-controllers and how to create technology and art together.

I was originally draw to the idea of creating a simulation, but I had a hard time fitting the constraints of the problem with just a simulation. This organically led to pursuing a project that was developed in the virtual world, but came to life in the physical one. I stumbled upon projection mapping through a raspberry pi tutorial that was intended to be simple projection mapping with computer vision. I played around with the idea, but the aesthetic wasn’t really there so I cut the vision aspect.  Projection mapping is a really dynamic implementation of what traditionally is

The program ofxPiMapper is an opensource platform that was developed to be used with a RPi. It was a bit hard to set up, because I was using a corrupted SD card. Once I had installed everything from the remote git account all I needed to do was import images and videos that I wanted to stream.

I realized a bit late that the task of creating a platform to project onto is pretty hard with my timeline, so I went with a minimum viable product (MVP) of creating origami pyramids to project onto. I got the idea out of necessity, because I wasn’t able to laser cut in the ITLL and I really wanted a crisp set of lines for the project.