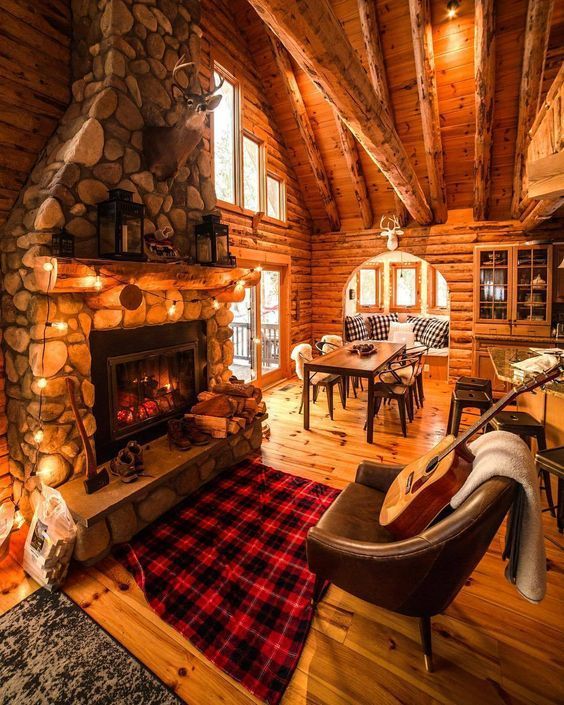 I have always been captivated by the warm and cozy feeling that a cabin in the woods gives me. The embrace and calmness of a fireplace in the living room and the smell of woodfire smoke make you feel like you are away from civilization and all responsibilities. Even looking at the deer mount on the wall, one can become lost in thought with the memories of all the crazy adventures and trips that took place in that cabin. The rugged look of the log walls, wide plank floors, and wooden furniture make you understand the effort required to develop a rustic aesthetic.

There is no exact date that the rustic aesthetic can be traced back to since “rustic” represents what used to be common, rural, or even primitive. Rustic can even represent the way cavemen used to decorate their shelters with hides, bones, and carved wood. Even thousands of years later, Vikings, Native Americans, and many other cultures over the world and over the ages would still decorate their homes and create artifacts like this. Rustic design is not bounded to an era because it is bound to nature. Mostly everything is handmade with an appearance that it came from raw materials fetched straight from the forest. There is a predominant presence of wood, stone, taxidermy, tanned hides, fabrics, and some metals that gives the aesthetic an organic and rough character.

The common image that most people have of rustic design is what came to be known as “country” aesthetics in the 18th century, after the North American colonies took the old-time style of simplicity and made it their own. Closer to the 19th century, the rustic style had adopted part of the Wild West culture where the primitive had somewhat merged with the modern. It still had the same decorations that come from trapping, hunting, and every relation to the outdoors, but now it also showed more modern features like the famous saloon doors, oil lanterns, and mounted lever-action rifles.

With the development of the civilized world, the rustic style was slowly left in the past and in rural areas separate from big cities. However, the rustic aesthetic is still a big part of the culture of most people who consider themselves outdoorsmen. The tradition of spending time at an old cabin in the woods, a hunting cabin, or a lake house has been passed down over the generations. The appreciation for the rustic aesthetic is intensified by the memories created from experiences such as a father and son’s fishing or hunting trip.

The rustic aesthetic keeps mixing with the modern and evolving as it did in the 18th and 19th centuries. The 20th century witnessed the creation of the Modern Rustic aesthetic, which incorporates the sleek design of the modern style with the organic and worn appearance of the rustic design. I believe that this new style has created division within the rustic culture since it breaks away from the primitive design and integrates a more civilized style, forever changing the traditional aspect of what we imagine a hunting cabin to look like. However, people in the 18th century could have said the same thing about integrating the Wild West style into what used to be a simple log cabin.

What do you think? Will the Modern Rustic aesthetic overshadow the traditional Rustic design? Will the rugged hunting cabin with no Wi-Fi be abandoned in the past? Do you have any other thoughts on this topic? Leave your comments below!

Image Sources (in order of appearance)

Gary Marshall
I am originally from Venezuela and moved to the US when I was 17. I graduated from CU in 2019 from Mechanical Engineering with minors in Physics and Engineering Management. I then decided to pursue masters in Mechanical Engineering and Engineering Management. I am working as a Systems Engineering Intern at Syncroness and hope to continue there full-time if offered a position. I enjoy hunting, fishing, camping, hiking, skiing, playing guitar, playing video-games, and playing with my dogs. Let me know if you like one of these too or want to know more about me!
Previous Post
Rainy Day Aesthetic Exploration
Next Post
Explore an Aesthetic: Tudor Style Architecture