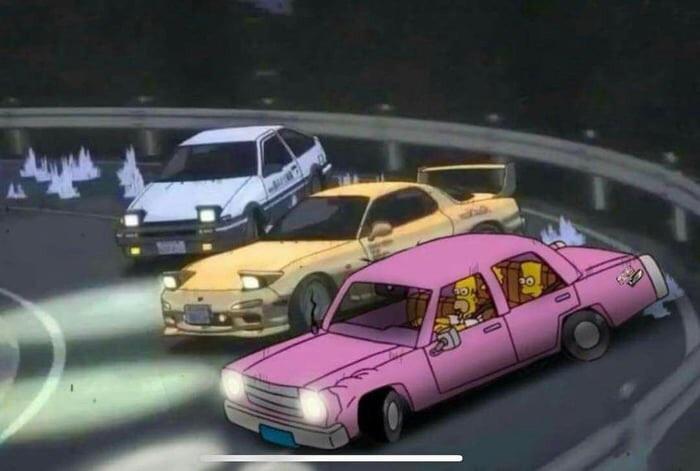 The aesthetic I would like to explore for this post is that of drift cars. Drifting is a driving technique in which the driver intentionally oversteers and slides the car, losing traction but remaining in control, steering the car around a corner. This technique originated in Japan around 1960-70, and was foremost pioneered by Kunimitsu Takahashi, a former motorcycle rider who turned to driving. While Takahashi is referred to as the Father of Drift, drifting was largely popularized by a driver named Keiichi Tsuchiya, also known as the Drift King. In 1987, Tsuchiya worked with many popular car magazines and garages in Japan to create a video highlighting his skills, and as this video become more and more popular, drift aesthetic was born. As drifting culture was born in Japan, and still has it’s roots there, Japanese cars have become the go to for drifting. Takahashi and Tsuchiya both drove cars that have become immensely popular since then, with Keiichi Tsuchiya’s green carbon hooded Toyota AE86 being one of the most well known drift cars in Japan.

Due to the appearance of Tsuchiya’s AE86 in “Pluspy”, and its widespread availability in Japan, it immediately became popular in the drift community, and its image has been used in many forms of drifting media since. In fact, this car is a large reason for the surge in the popularity of drift aesthetic in the United States, as it was featured in the popular anime “Initial D.” Initial D, as well as “The Fast and Furious Tokyo Drift,” shaped the aesthetic of drifting in the minds of many young Americans such as myself, exposing them to big wings, wide body kits, and eye catching visuals on the sides of the cars. As these movies and shows began to gain popularity, more and more drivers became interested in building their own drift car, and now you can find these style cars at just about any track day or car show.

Another development that made drift aesthetic even more popular was the rise of competitive drifting, not only in the United States, but also all over Europe, as well as Australia and New Zealand. Competitive drift cars combine drift aesthetic with the aesthetic of conventional race cars, usually building the look around sponsorships and eye catching patterns, to stand out among their competitors. As a result of this, many companies, such as Rockstar or Monster energy, are often associated with drift cars.

While the aesthetic of drift has a very wide scope, and there is a big difference between older and modern drift cars, there are still very many recognizable vehicles and styles that help to define the aesthetic. A unique aspect of the drift aesthetic that I like is that even as the aesthetic has evolved and changed, the roots have always remained, and are still relevant today.