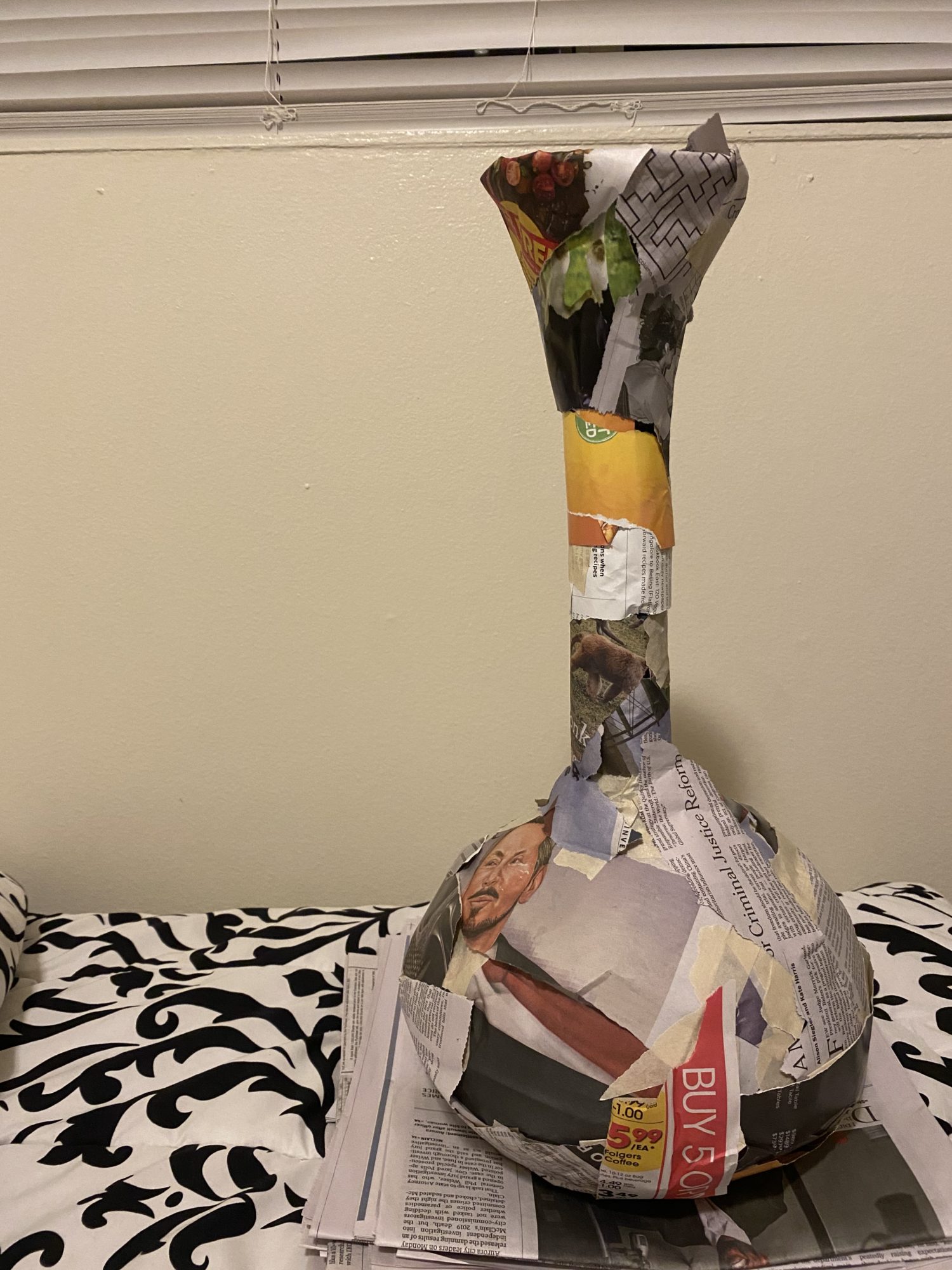 For my project, I decided to upcycle a decorative vase I had by using leftover magazines, newspaper, and other paper material lying around my house to form an art piece that fits the Merz paper mache collage aesthetic. I have been interested in the Merz aesthetic ever since I found out about and researched it’s creator: Kurt Schwitters. His artistic work in the Post impressionist and in the Expressionist era stands out as he created his own movement and aesthetic called Merz. Merz was where he used random bits of newspaper, poster, wrappings, and literal trash to arrange them into a paper mache collage that he carefully cultivated into a frame. I wanted to use paper mache for my project since it would be easily accessible and it would be flexible around the curvature of the vase.

Above was my vase that I started out with. The base of the vase is a round spheroid shape almost looking like a slightly flattened globe. The stem of the vase is a pretty straightforward cylinder shape that sprouts out near the top. Finally, the case is made up of a singular large metal wire band that is twisted in a helix shape and is wound around into the shape of the vase. At first, I wanted to make a replica of the vase using a cardboard frame over it and then recreating the vase with a paper collage around it. But as I found out, carboard was very difficult to attach to the material of the vase. So, what I ended up doing was attaching the paper straight to the vase.

To start off, I ripped of pieces of various newspapers, books, and magazines that looked interesting or whose colors or letter arrangements would make interesting collage sections and taped them to each other and to the vase with masking tape. At first this started to work fine. I intentionally didn’t use scissors and instead used my own hands to rip the paper to give the edges of the pieces a more organically used paper look. I avoided using straight edges and concrete points of separation and instead chose a half planned half sporadic method of ripping pieces out. This way, I was able to choose neat looking illustrations or designs on the paper and tear out parts of it in rudimentary manner that didn’t always cut around the part I wanted. But, the problem was, the tape started to take up much of the space on the outside of the vase and I was worried the all of the tape would stand out too much. So I started curling the tape to make double sided tape and attached them to the paper pieces so that when added to the vase the tape wouldn’t be visible.

So, I used the pieces with double sided tape to cover areas where there was too much tape. But, since the masking tape didn’t seem out of place with this aesthetic, I decided to leave some of on the vase. Eventually, I finished up the base of the vase and I had paper going all around the sphere and it seemed pretty situated. I used a diversity of different types of paper and pages including ads, newspaper articles, newspaper illustrations, and other pieces that I purposely shaped around each other. Then, I started to go up the stem.

Finally, for my finished product, I used a bit more variety near the top and used some crossword and other puzzle pages as well as comics and grocery shopping pages around the “bloom” of the stem of the vase. I fit in some papers and pages inside of the stem as well in order to give the full visual aesthetic of collage. Unfortunately, the flaws in functionality of a vase made of paper mache didn’t hit me until halfway through making the item, since a vase that holds water wouldn’t be very effective with paper holding it. But then I realized that the original vase was for decorative purposes anyway. In terms of the aesthetic, I tried to make it seem like a random mess of paper with words, pictures, drawings, and design with no direction. But at the same time, like in Merz collages, the pieces had purpose in it’s relative shape and positions to other pieces in the collage. I feel as if it could’ve been a bit more coordinated in terms of shade and tone, and I think I needed to use less tape on the surface. Also, looking back on existing Merz collages, it seems that I could’ve used more straight edges to the pieces and overlapped them instead of tearing and taping edges at random. But, even though it can seem like a jangled mess of paper, I think it still fits the aesthetic of a Merz collage.