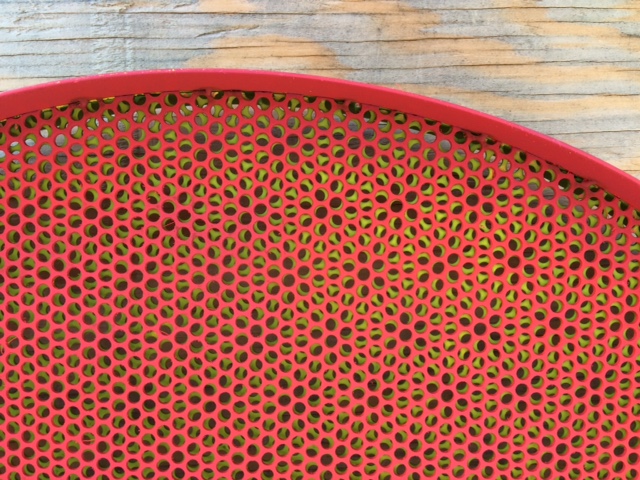 Immersion Wheel Final Report Part 1 – What and How

The project objective was to create a dynamic object, something that changes throughout time. When thinking about something that actually changes, I began questioning if a physical object could actually change, or was change simply an optical illusion? Sure things could be moved around, added or subtracted, but do thing s actually change? Obviously there are objects that do physically change, but I became intrigued with the notion of visual change created my static objects. More specifically, what I had in mind was a Moire effect, where 2 identical (unchanging) patterns create a dynamic visual effect when moved again one another. To think that flowing geometric patterns are hiding in plain sight of something as mundane as perforated sheet material was compelling enough to design around. Below is a rough prototype I created of a Moire effect using polka dots printed on transparencies:

I did not consider a Moire effect on its own to be a specific aesthetic. Instead I set out to create an object that would fall within a psychedelic aesthetic. Psychedelic in the sense that the object could induce transcendence when experienced; not just hearken back to flower power motifs of the 1960’s. Psychedelic aesthetics can take on any number of forms- whatever mind bending shapes, colors, or experiences may facilitate an expansion of consciousness, for example is the Lucid Dreams genre of YouTube videos such as this one:

With the goal to couple the Moire effect with a psychedelic aesthetic, I titled the object “The Immersion Wheel”. My hope was that people who encounter this art would benefit from a deep mental journey and perhaps a little escape from reality. While researching visual elements of transcendence, I came across numerous accounts of sacred geometry. Sacred geometry is basically any shape worth reverence. Hexagons stood out among examples of sacred geometry for several reasons. Hexagons are present in nature, as seen in bee hives and snowflakes. They among the strongest shapes, and therefore utilized in widespread engineering applications. They are easy created by superscribing a single radius. Hexagonal patterns are present in different religions over the ages, which suggests that the shape itself has facilitated a connection to a greater power. And they have been to used to depict drug induced hallucinations, which by some accounts enable one to see the underlying nature of the existence.

The plan was originally to use two perforated steel sheets that would produce a hexagonal moire pattern. These steel plates would be painted in a vibrant CMYK color scheme to contribute to the visual stimulus. The wheels were to roll on bearings concealed within the base as to keep the center of the wheel free of a visual distraction and be more immersive. Below is an  illustration of the original design intent:

This design intent was pursued almost to the point of completion with the procurement of the perforated sheets, welding the circular frames, and painting the plates with vibrant high contrasting colors. The result was interesting to observe. However, I was not pleased with the fit and finish of the metal plates. The paint job had the blatant appearance of spray paint. The weld marks were hard to conceal around the edge of the wheels. And perhaps most importantly, I felt that the Moire effect was not as strong as I had envisioned. Below are images of the actual object I created:

Feeling somewhat disappointed in the direction the project was heading, I did not pursue the technical challenge of getting the heavy steel plates to stand up and roll smoothly on bearings. I also felt that the object I had created was lacking a certain level of design work, because it was primarily utilizing found objects. So I went back to the drawing board with the original inspiration of Moire effect, psychedelia, and sacred geometry.

I set out once more to design a more original piece of art which I could call my own. Rather than using a dot pattern to create a hexagonal moire effect, I chose to work with parallel lines rotating across each other. For the sacred geometry, I created a unique pattern based on a common radius. The hexagonal pattern was elaborated to create a type of blue print appearance of six sided pedal formation. And for a psychedelic effect, seven color LED lights were used to illuminate the geometric pattern. Interestingly, I found the new design to have a distinct Art Deco aesthetic to it, which was totally unintentional. Here is an example of of an Art Deco for conparison:

The pattern was made in Solidworks and exported to CorelDraw to prepare for laser etching. There are two main layers that have the same pattern: the stand and the wheel. Below is the CAD drawing and short animation of the new Immersion Wheel pattern:

The profile was laser cut and pattern laser etched in the ITLL. Here is the new Immersion Wheel lit up before the final assembly:

The hub assemble consists of a 22mm  ball bearing epoxied into place in the center of the wheel, a 5/16 bolt, washers for spacers, and nut. The stand assembly consist of a 2′ long 1’x6′ board with angle aluminum to hold the acrylic sheets in place. The lights are 7 color LED in a rubber strip and a handy dandy remote control.

The cost of this entire project ise $350:

$100 in steel material, $50 in cutting and welding service

$150 for acrylic (cut to fit into the laser cutter)

$45 in material for the base and hub: wood, axis, ball bearings, bolt.

$30 paint, gas, and other incidentals.

The project ran abotu $50 over budget, which is acceptable considering that two completely different Immersion Wheels were created. In the end, both objects are quite interesting to play with and I’m considering bringing both to Expo.

One thing that bug s me is that when I try to clean the acrylic, it scratches. The other thing I wish I could change is that the wheel doesn;t catch much light, so the Moire effect isn;t that strong. I have ordered small battery operated LEDs which I hope to use to illuminate the wheel, but they have yet to arrive.