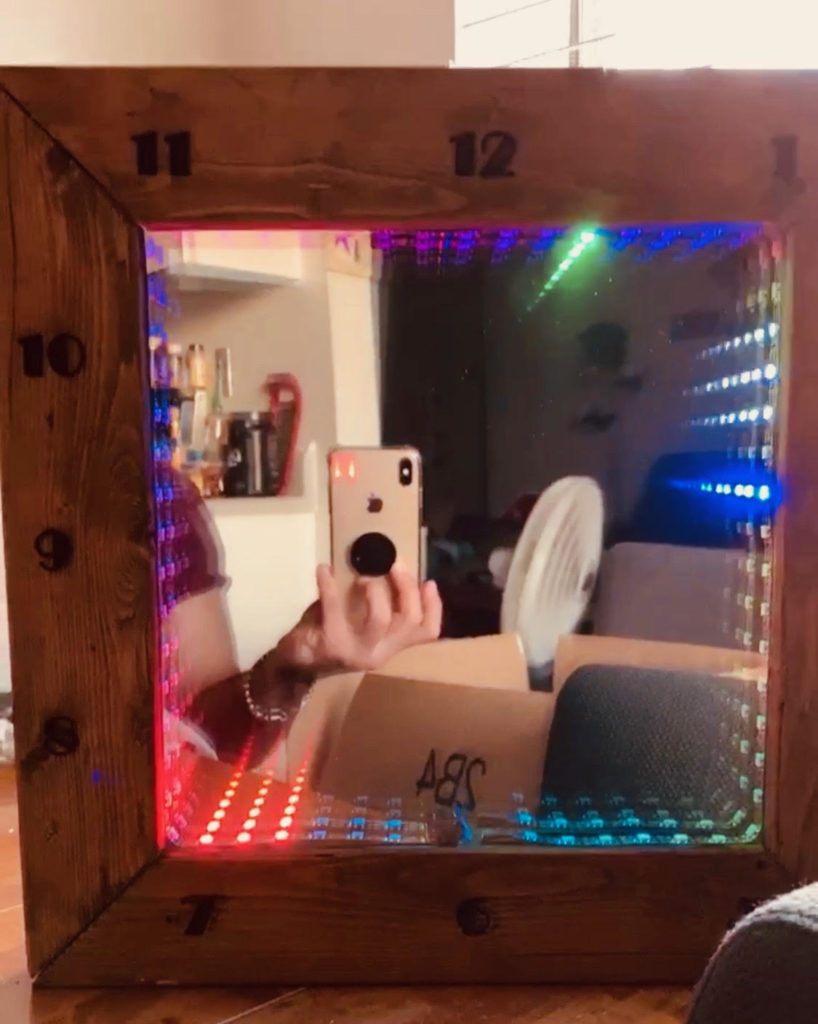 For my project, I made an infinity mirror clock that uses LEDs. The way it works is quite simple. AN LED strip is programmed to display time and is placed between a regular mirror and a one-way mirror. This creates an infinity effect and adds a really cool, futuristic aesthetic.

I started off with some sketches of my clock design as well as sketches for potential aesthetics. The initial design was a clock that is 18″ X 18″’X4″ with 6” borders. It will be enclosed by a frame consisting of 4 pieces with two slots on the inner surfaces.

The first step was to model the frame on CAD so that I could work on it using the wood shop at the Idea Forge on campus.

The next step was to cut out the frame. I stared by sawing out the slot. Then I sawed off a corner. After that, I cut the wood to length and then cut the ends at 45 degree angles. I finished by cutting out slots for the wooden biscuits. I also got the back panel cut to size. Lastly, I drilled out slots on the frame to feed the wires through over the mirror.

After that I laser engraved the numbers onto the wood.

The next step was to stain the wood and paint the inner border of the frame black to enhance the infinity mirror effect.

The wood frame was now essentially finished. It was time to move on to the circuitry. I used an ELEGOO Uno and had to hook up the rotary push button encoder, the LED strip, and the RTC. The RTC is what feeds the time and date information to the ELEGOO and allows for the time to be kept even when the clock is powered off. The encoder is what is used to toggle between displays and to set alarms and timers. The LED strip had to be a specific kind that had 60 LEDs so that it could function as a clock. It is a RGB strip so that it can display multiple colors. I built the circuit, soldered the tips, taped and glued wires down to compact the circuit, and then uploaded the code after setting the time on the RTC.

Finally, I assembled the clock. I glued three panels of the frame together, inserted the acrylic sheet in the slot, then glued the final panel. After it dried, I stuck the LED strip on the inner border. Then I connected the LED back to the circuit, and glued the mirror down with hot glue on the corners I cut out. I then glued the circuit down onto the back of the mirror. I drilled 4 holes through he back panel and the frame so I can screw the panel on. I then drilled out a hole in the back panel for the button to feed through and another for the power cord. Then I screwed the panel on.

I got my code from Source Forge under the user, Rise and Shine LED Clock.